The asbestos industry is fanning the flames of resentment. We must make them stop 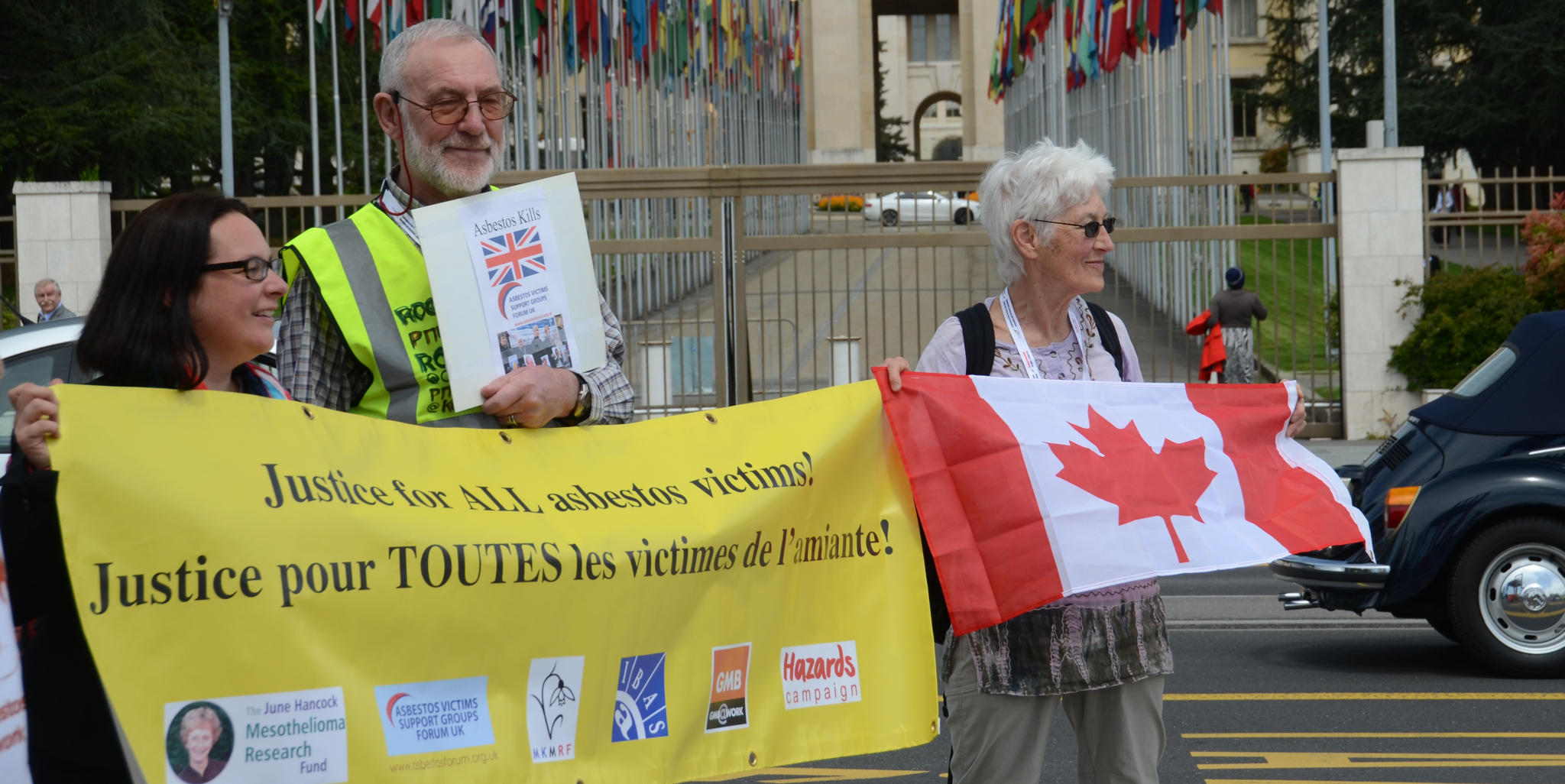 Kathleen Ruff (right) demonstrating outside the UN in 2011 after Canada refused to allow chrysotile asbestos to be put on the Rotterdam Convention's list of hazardous substances, while still listing it as hazardous in Canada. Photo by Sascha Gabizon
Previous story

The asbestos issue is back on the agenda of the Quebec and Canadian governments, with multibillion-dollar projects to extract magnesium and other minerals from the mountains of waste left by asbestos mining companies. According to Quebec government health authorities, the waste contains up to 40 per cent asbestos. Houses, schools and public buildings are nearby. The projects require moving the waste, thus disturbing the asbestos fibres and presenting a serious health risk to workers and the community.

A pilot project is underway. The final decision from the Quebec government is pending.

All 17 Quebec directors of public health asked the federal government to include asbestos mining waste in its regulations to ban asbestos. The government rejected their request, exempted the mining waste and invested $12 million in the projects.

The asbestos lobby uses the same tactic as the Alberta oil industry of vilifying its opponents as enemies secretly working for foreign interests who wish to destroy the livelihoods of local communities. Both thus avoid addressing the scientific and economic facts, instead stirring up resentment — a powerful and destructive human emotion, which makes rational debate difficult. Without fact-based debate, democracy withers.

In 2016, the International Chrysotile Association (ICA) — formerly called the International Asbestos Association and still based in Quebec — lobbied the Canadian government to exclude asbestos mining waste from its asbestos ban. Its president, Jean-Marc Leblond, noted that “successive Canadian governments have defended and wholeheartedly supported the mining and use of chrysotile (asbestos).” He vilified those who oppose asbestos use, calling them an “anti-asbestos crusade, which includes huge vested interests that are often very different from those concerned with health.”

In 2019, the Quebec government asked the independent Office of Public Inquiries on the Environment (BAPE) to hold a public inquiry into the projects and make recommendations. Fomenting anger, Conservative MP Luc Berthold then stated that a powerful, rich anti-asbestos lobby is operating in Quebec and Canada and finances false scientific studies on asbestos. This very powerful lobby abuses every forum to denigrate asbestos and denigrate the Quebec asbestos-mining region, said Berthold. He provided no evidence. A Radio-Canada investigation, however, documented extensive lobbying on the federal and Quebec governments by proponents of the projects.

Former federal Conservative Party leader Andrew Scheer and other key party leaders were asked to repudiate Berthold's inflammatory statements but did not.

The ICA is funded by overseas asbestos interests. It vilifies those who oppose asbestos, saying, “the current anti-asbestos crusade is nothing more, but nothing less, than a 21st-century trade war,” and that “big occult interests have been feeding this noxious crusade.” The ICA omits the fact that the world scientific community opposes asbestos use.

While in office from 2006 until October 2015, the Conservative Party of Canada denied the scientific evidence on asbestos and, like previous Liberal governments, funded the asbestos lobby.

Former prime minister Stephen Harper accused the other political parties of wanting “to shut down the asbestos industry and deprive families of their livelihood.” Fomenting resentment, Harper stated the Conservative Party was the only one that would always defend the asbestos industry because it was the only party that cared about rural communities.

The asbestos lobby uses the same tactic as the Alberta oil industry — vilifying its opponents as enemies secretly working for foreign interests who wish to destroy the livelihoods of local communities, writes Kathleen Ruff @RightOnCanada. #asbestos

Shamefully, in 2015 at the United Nations, our federal government continued to reject the science on chrysotile asbestos and refuse to support its listing as a hazardous substance, saying it was not worth continuing to oppose its listing because the Quebec government had shut down the asbestos industry.

The writing was already on the wall for the asbestos industry, just as it is today for the fossil fuel industry. Neither are viable without government financing. The asbestos market plummeted from five million tonnes sold annually in the 1970s to 1.2 million tonnes today.

Neither the Conservative nor Liberal governments were ignorant or stupid. They knew the scientific evidence was indisputable and that, economically, asbestos was a dying industry.

We must learn a lesson from this experience, which is that the key challenge facing us is not climate change or toxic products, but the rejection of scientific evidence and the gutting of democracy by vested interests. If we do not win this battle, our chances of winning any battle to stop destructive practices are slim.

During this federal election, we must stop allowing political leaders to deny clear scientific evidence, foment resentment and sabotage democracy.

Our lives depend on it.

Kathleen Ruff is a former director of the BC Human Rights Commission. She was awarded the medal of the Quebec National Assembly for her work to stop asbestos mining and the National Public Health Hero award of the Canadian Public Health Association for mobilizing scientists to defend the science on asbestos.

I agree that there are

I agree that there are similarities between the asbestos industry and the fossil fuel industry. In the forties and fifties, Québec was a powerhouse of the asbestos industry. But gradually, we became aware that it was dangerous to human health. Except for a few lobbyists such as ICA(International Chrysotile Association) and a few «dinosaur» politicians such as Mr Berthold, asbestos is not an issue in Québec. We gave up on that industry. I hope that the champions of the petroleum industry will be as wise about fossil fuels as we were wise about asbestos. For the good of mankind, both asbestos and hydrocarbons must remain in the ground!