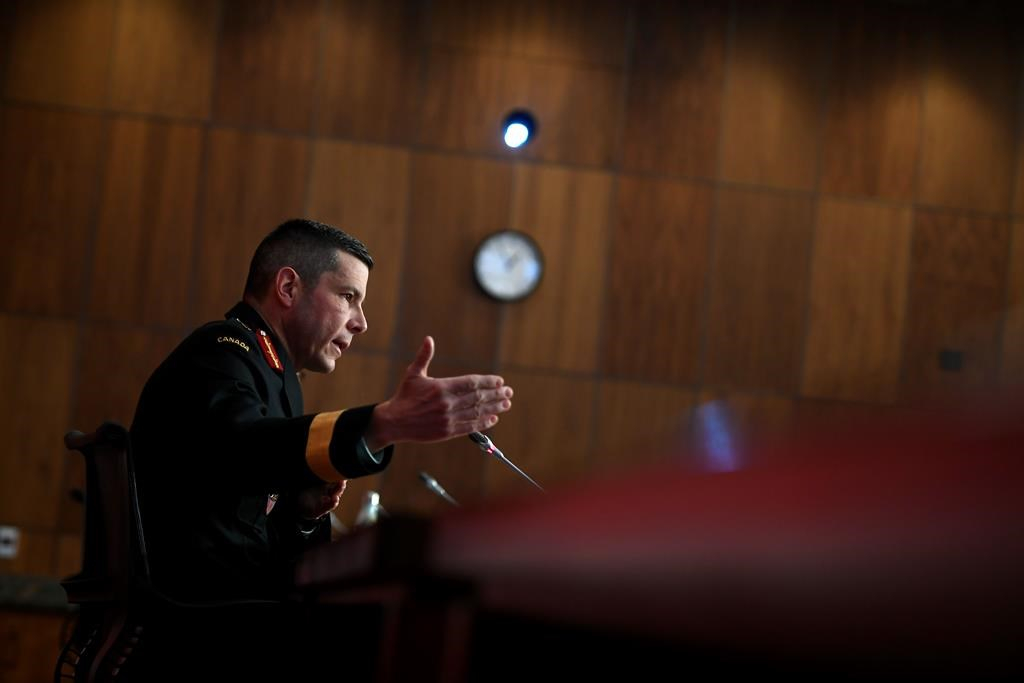 Maj.-Gen. Dany Fortin, Vice-President of Logistics and Operations at the Public Health Agency of Canada, speaks during a technical briefing on the rollout of COVID-19 vaccines, in Ottawa, on Dec. 3, 2020. File photo by The Canadian Press/Justin Tang
Previous story
Next story

The senior military officer who oversaw Canada’s vaccine rollout campaign is poised to be charged with one count of sexual assault, though one of his lawyers is raising questions about the timing of that decision in relation to the federal election.

Maj.-Gen. Dany Fortin is scheduled to present himself to police in Gatineau, Que., this morning after being told a warrant had been issued for his arrest in relation to an alleged incident dating back to early 1988, lawyer Natalia Rodriguez told The Canadian Press.

Fortin, who previously served in Afghanistan and commanded NATO troops in Iraq before leading Canada’s COVID-19 vaccine distribution effort, is expected to address reporters after he appears before police.

The military officer was removed from the vaccine rollout on May 14, five days before the Canadian Forces National Investigation Service referred a sexual misconduct investigation to the Quebec prosecution service to determine whether criminal charges should be laid.

Fortin, through his lawyers, has denied any wrongdoing and says his reputation has been badly damaged by the allegation. He is now fighting in Federal Court for reinstatement to his previous position at the Public Health Agency of Canada, or an equivalent post.

The military officer and his legal team were surprised by the decision to lay charges, said Rodriguez, who is representing Fortin in his Federal Court application and is not a member of his criminal team.

She added Fortin’s legal counsel have so far been provided little information about the allegation against their client, “so he doesn’t know what this is about at all.”

Rodriguez went on to question the timing of the charge against Fortin, which comes days after Prime Minister Justin Trudeau launched an election.

The Liberals have been criticized for months for not doing more to address sexual misconduct in the Canadian military.

Fortin's lawyers have argued in Federal Court that the decision to remove their client was unreasonable, lacked procedural fairness and involved improper political interference in the military chain of command by Prime Minister Justin Trudeau, Health Minister Patty Hajdu, Defence Minister Harjit Sajjan and clerk of the Privy Council.

The government is required to respond to those allegations on Sept. 17, three days before voters head to the polls.

“The timing of the charge raises questions,” Rodriguez said. “We’ll be looking at answering those questions and making sure this is not politically motivated and that it is above board. As Maj.-Gen. Fortin’s lawyers, we have a duty to ensure that there’s been no improper political interference in this case.”

Defence Department spokeswoman Jessica Lamirande declined to comment on Tuesday night, saying in an email: “As the matter is moving through the legal process, it would be inappropriate for us to provide any further comment.”

Officials for Trudeau and Sajjan could not be immediately reached for comment.

Fortin isn’t the only senior military officer with whom the government is fighting.

Admiral Art McDonald last week said he was planning to return to work as chief of the defence staff after a five-month investigation into his conduct resulted in no charges. But the Liberal government ordered McDonald to stay on administrative leave until they could decide what to do with him.

_With files from Bob Webber