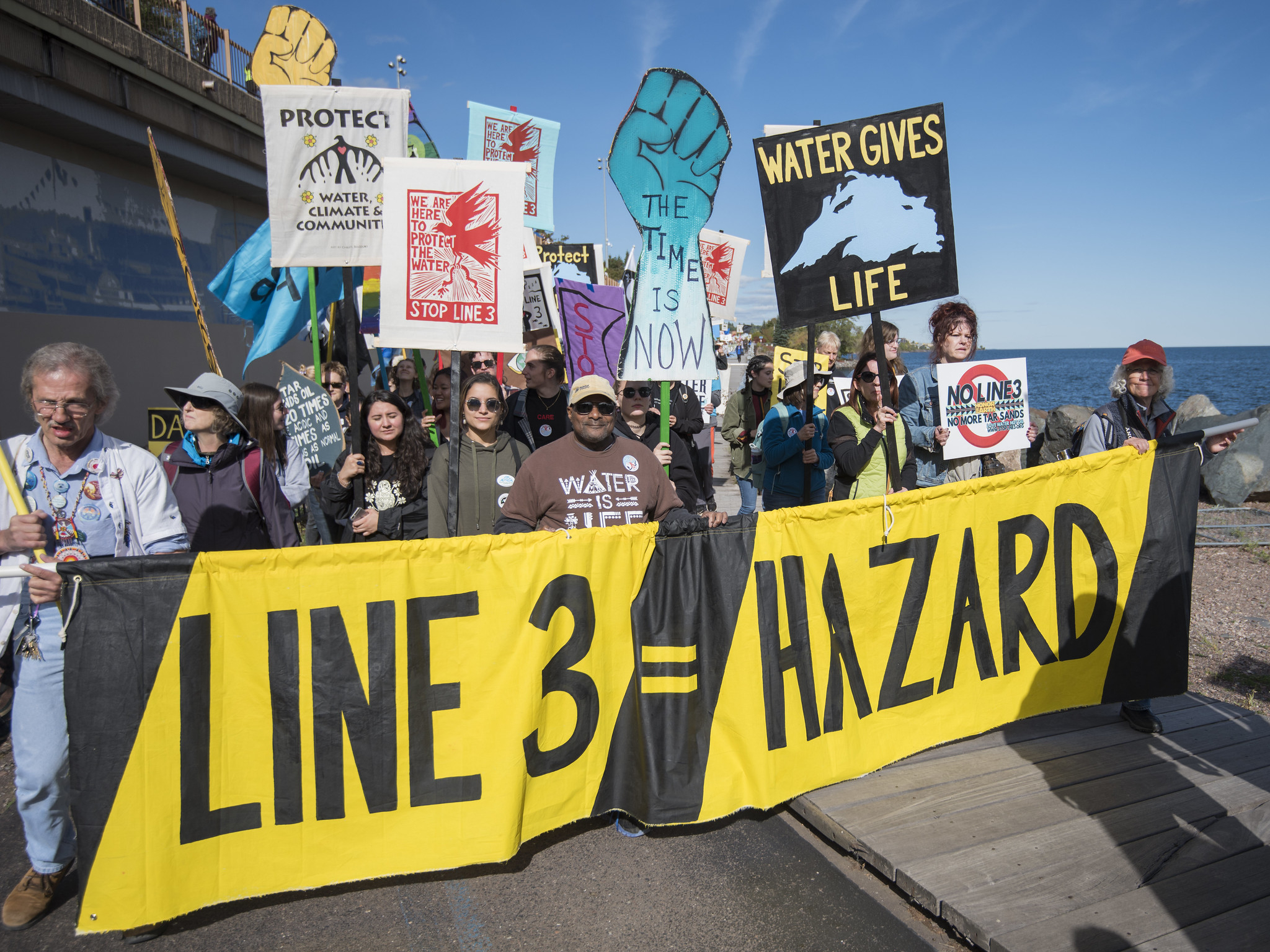 Protesters against the Enbridge Line 3 oil pipeline gather on the shores of Lake Superior in Duluth, Mich., on Sept. 27, 2019. Photo by Fibonacci Blue / Flickr (CC BY 2.0)
Previous story
Next story

The White House is facing mounting pressure from Democrats to yank federal permits for Line 3, the controversial oil pipeline under construction in Minnesota.

Carrying out a new assessment, they said, would “ensure a full and significant environmental review that includes assessing the project’s real costs on the environment, public health, and climate change and ensuring the public is aware of those costs.”

The Army Corps conducted “almost no independent evaluation of the risk of oil spills at the crossings it authorized, despite the fact that the route for Line 3 crosses 227 lakes and rivers, including the headwaters of the Mississippi River and rivers that feed directly into Lake Superior,” the letter said.

The lawmakers complained that the Army Corps’s final permitting analysis last November of how the pipeline would affect climate change came down to “a single paragraph in which greenhouse gas emissions from construction and operation of a major tar sands pipeline are dismissed as ‘de minimis.’” They asked instead that the administration examine how the potential for serious drought across the region could “exacerbate the environmental costs of an oil spill.”

Yet “the most serious areas of omission” appeared in the infrastructure agency’s failure to adequately consult local tribes, many of whose members have led the ongoing protests against the pipeline’s construction, braving assaults from police and private security and blasts of debris from deliberately low-flying federal helicopters.

The lawmakers singled out the Minnesota Department of Natural Resources’ June approval of Enbridge’s plan to pump 10 times more water away from the construction site than was approved last November.

“The magnitude of this transfer will have grave implications for the ecosystems near the pipeline, including the wild rice beds that are a staple food for the Anishinaabe people and core to the way of life,” the letter read. “It is our understanding that the Red Lake and White Earth tribes were not consulted on this dramatic increase, despite the fact that it will directly impact them.”

Enbridge said its “pipelines have coexisted with Minnesota’s most sacred and productive wild rice waters for over seven decades,” and insisted it has “a commitment to addressing climate change." #Line3 #Pipeline

The White House referred questions to the Army Corps, which did not immediately respond to a request for comment.

In a lengthy statement, Enbridge said its “pipelines have coexisted with Minnesota’s most sacred and productive wild rice waters for over seven decades” and insisted it has “demonstrated ongoing respect for tribal sovereignty” and “a commitment to addressing climate change with real action.”

Enbridge, based in Canada, boasted earlier this year that the 1,031-mile pipeline is nearly finished, with just a portion of the 337-mile stretch through Minnesota still awaiting completion. In June, the Biden administration defended the water permits granted to the pipeline during the Trump administration and asked a federal judge to toss out a complaint from Native Americans and environmental groups challenging the project.

Support for the project has thus far become one of the darkest bruises to Biden’s nascent climate record, which includes reducing how much a coal company has to pay in federal royalties and approving a massive wave of new oil and gas drilling permits on public lands.

who thought he wasnt just the

who thought he wasnt just the other wing of the one party state whose job is to maintain status quo for the elite of the elite in the US corporate world. eg Exon, Chevron, monsanto dupont bayer