'Money is not the issue,' says B.C. minister as firefighters battle fatigue 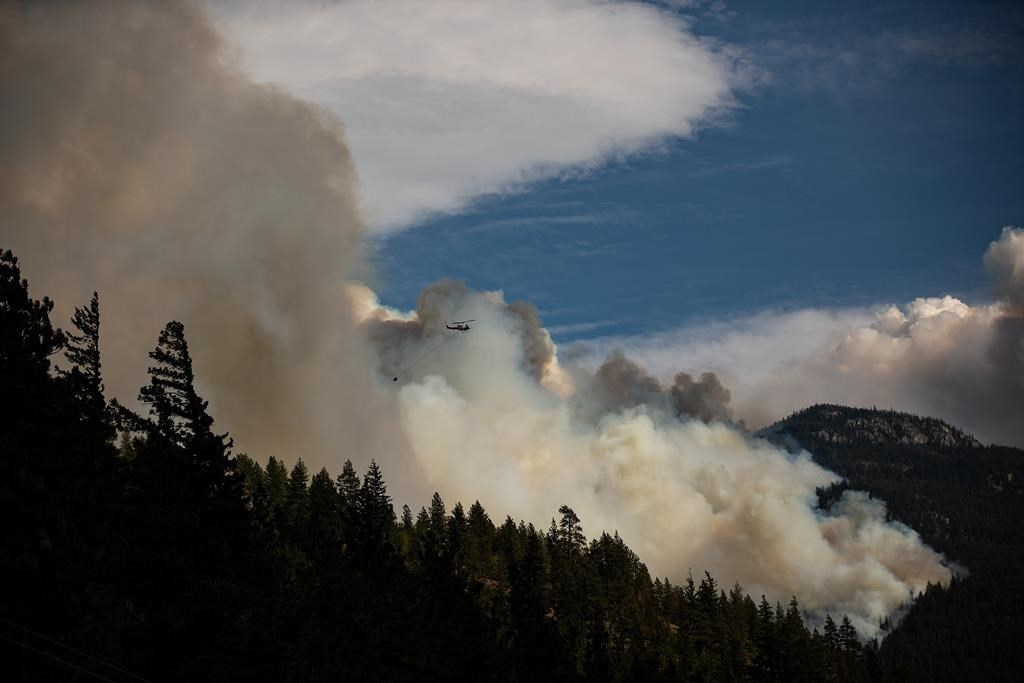 A helicopter carrying a water bucket flies past the Lytton Creek wildfire burning in the mountains near Lytton, B.C., on Sunday, Aug. 15, 2021. File photo by The Canadian Press/Darryl Dyck
Previous story
Next story

Wildfire crews are facing fatigue in British Columbia as the busy season wears on, causing concern for their safety, says an operations manager.

"It's something that we take seriously and we want to monitor and make sure our staff are safe," he said.

There are more than 3,800 firefighters from B.C. and over 500 from out of province helping fight the wildfires.

Nessman called it a "hard" and "difficult" season with at least a month left to go and hot and dry weather conditions making things tougher.

"Is it any worse than previous seasons?" he said. “It all depends.”

The conditions this year are similar to those seen in 2017, he noted.

Data from the Ministry of Forests and Emergency Management BC shows about 290 wildfires were burning in the province and more than 8,500 square kilometres of land has been lost since the start of the fire season on April 1.

Nessman said officials are keeping an eye out for staff who need more help or additional time off.

'Money is not the issue,' says B.C. minister as fatigue catches up with firefighters. #BC #Wildfires #BCPoli

"Some people are built for this and some people — it's more of a slog on them as well. But I will just say, it's a trying season."

While everyone is safe and there haven't been any "significant" injuries or accidents due to fatigue, he said now is the time that officials have to address firefighters’ concerns.

"It's been a long summer for many of our firefighters and staff supporting the efforts."

Nessman said they would also be losing some crew members as soon as they head back to post-secondary institutions.

Recent weather in parts of B.C. has helped the firefighting efforts with cooler conditions and a chance of showers through Sunday. But temperatures are set to rise over much of southern B.C. next week, while the fire danger map shows the risk in the Kamloops fire centre has returned to moderate from low after last week's rain.

Residents of a southern Interior community in British Columbia can return home following the lifting of an evacuation order a week after people were told to get out.

The District of Logan Lake lifted the evacuation order Thursday, while saying residents may have to leave again as the area is still at high risk with a "very" active wildfire nearby.

An evacuation alert was replaced by an "all clear" notice late Wednesday for more than 400 properties on the northwest flank of the roughly 811-square-kilometre White Rock Lake fire east of Kamloops.

On the northeast flank, the City of Armstrong has lifted an evacuation alert for about 5,000 residents but other evacuation orders and alerts are still posted — including one along the northwest shores of Okanagan Lake, where flames destroyed more than 70 properties this week.

The province has more than 70 evacuation orders in effect. There are also more than 120 evacuation alerts, which means people should be prepared to leave on short notice.

Public Safety Minister Mike Farnworth said the B.C. government is sparing no expense when it comes to fighting wildfires.

The B.C. government earmarked $136 million for this year's wildfire season, which is the same amount as 2020, says a news release from the Ministry of Forests.

"We spend what we have to spend," Farnworth said. "Money is not the issue."

This report by The Canadian Press was first published Aug. 19, 2021.