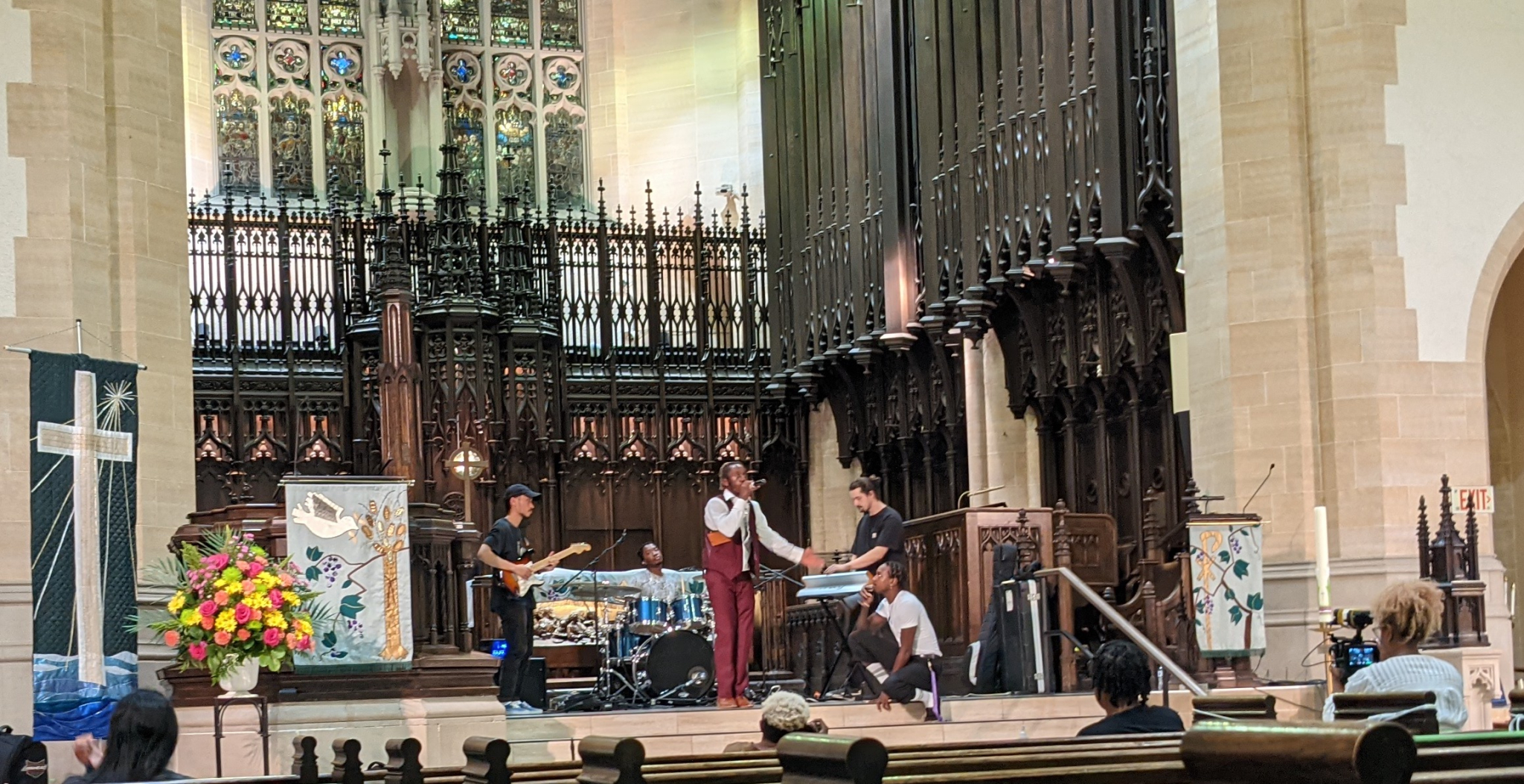 Ayrah Taerb takes to the altar of a major downtown Toronto church and raises a goblet, dressed in two parts of a sharp three-piece burgundy suit to chronicle his life on the margins.

“I’m gonna miss everybody,” he repeats often as the refrain to a new hip-hop track he’s performing at the Metropolitan United Church to a production crew and handfuls of others, jumping around in the high-energy sections despite sweltering heat one day in late August.

Taerb, who has been recording and performing his street hymns for a decade now, has been more productive than ever since the pandemic, he said in a recent interview with Canada’s National Observer.

But his latest work, a mid-length LP called Indica; Omega, which he’ll launch next month in a performance installation backed by a youth arts organization, has also come with particular challenges.

“In many ways, it was the most challenging album to create, since there are so many people to communicate with,” he said. “It’s a balance of having more access to resources and less freedoms because I’m more accountable to more people.”

The performance among the church’s stained-glass windows will be incorporated into a launch event next month at the Bentway, a new public art space under Toronto’s Gardiner Expressway, as part of SKETCH’s Making With Place program, which aims to animate and amplify silenced or hidden environmental and social histories.

As he explains on SKETCH’s website, the work describes his experience “at the intersections between poverty and genius: complexity and culture; the speed of capitalism versus the stillness of humanity.”

“I’d like to think that it’s made me a better person, even if I’m more aware of the ways I’m not a great person,” he said. “I’m excited to publicly discuss that through the music, because like I said, I can’t do the Canadian façade thing anymore. And I don’t think I'm the only one, either.”

“If you want to claim to be an ally, you gotta provide substantial supplementation to the liking of the community you’re claiming to help,” says Ayrah Taerb.

In conversation, Taerb touches on a range of topics — from his creative process and development to the industry that profits off Black culture while failing to adequately support the communities that produce it.

“If you want to claim to be an ally, you gotta provide substantial supplementation to the liking of the community you’re claiming to help,” he says, adding he knows a bunch of artists who could make a quality product from a songwriting and conceptual perspective, but who need production or engineering help.

Taerb said it should be a common occurrence for young Black creatives to receive $50,000 to make an album, arguing that the financial backing would help Toronto establish a cultural identity suitable for a metropolis of its size.

The Making With Place program is funded as part of the city’s ArtworxTO program, which will promote public art and creative communities over the next year.

Taerb’s performance and talk will take place at 4:20 p.m. on Oct. 7 at the Strachan Gate Green Amphitheatre.