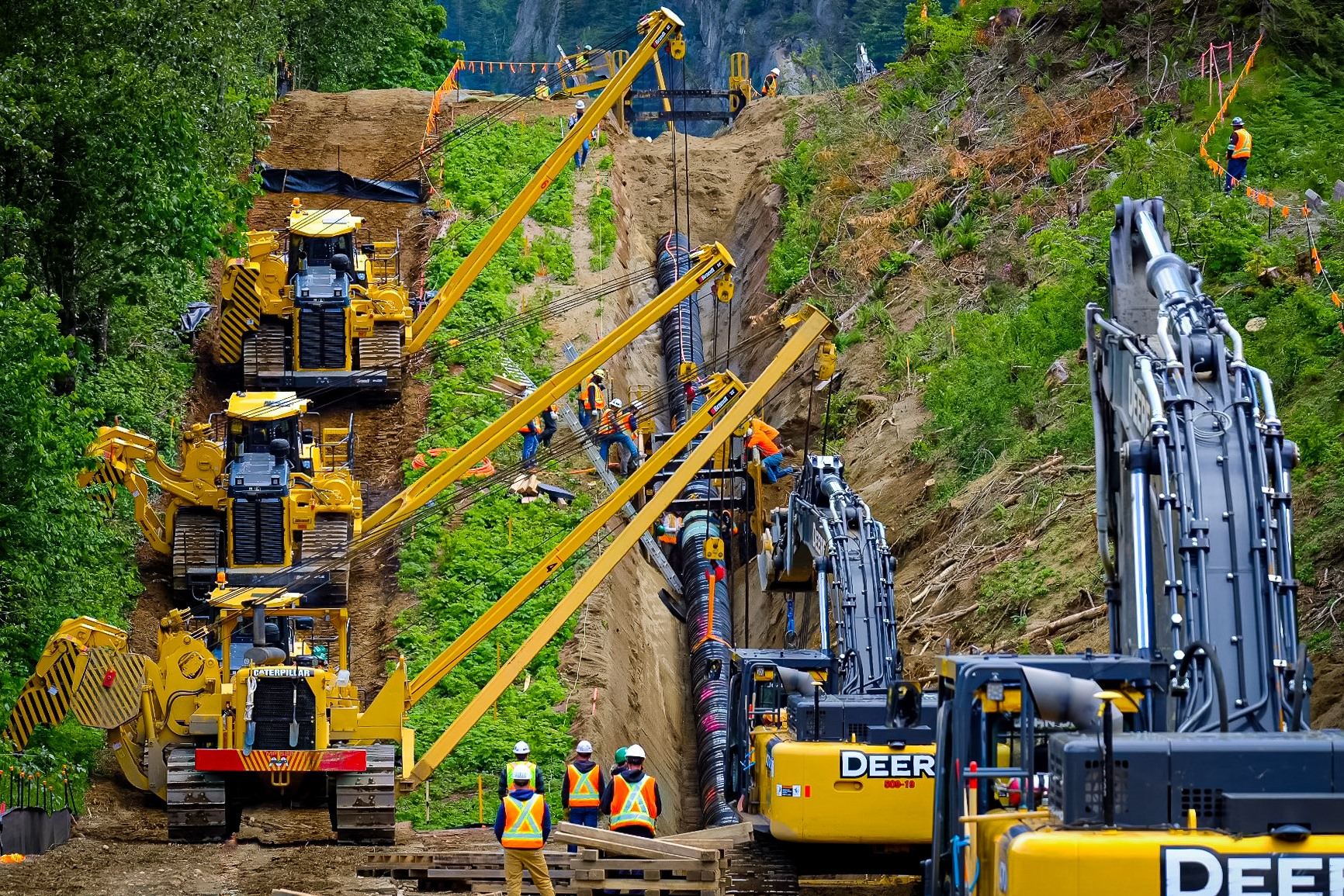 The cost of the Trans Mountain expansion project continues to soar, but by how much exactly is still not clear, according to a new report from West Coast Environmental Law. Photo via TMX / Facebook
Previous story
Next story

The costs of the Trans Mountain expansion project continue to soar, but with the company behind it increasingly opaque since Ottawa bought the pipeline, it’s difficult to say by how much, according to a new report from West Coast Environmental Law (WCEL).

That’s why the Vancouver-based non-profit is calling on the next federal government to provide detailed and transparent information about the project’s cost and schedule, fearing the bill could be far above the $12.6 billion announced in February 2020.

“We estimate that the cost of construction is now approaching $20 billion,” said Eugene Kung, a co-author of the study. “Part of the challenge is that without updated information from Trans Mountain, we're left to put these guesses out there, (but) until I see something credible that changes that, my view is that it's close to $20 billion.”

Kung explains WCEL landed at that figure by poring over hundreds of documents filed with the Canada Energy Regulator, along with sworn affidavits.

“What we found was evidence in every segment of the pipeline of delays ranging from two to 23 months, and what that allows us to do is project that the project is now going to be delayed until 2023,” Kung said.

Trans Mountain declined comment on specific claims made in the report.

“At this time, we have no update to the cost or overall schedule of the project — any update will be as a result of a thorough and detailed process,” a spokesperson said.

There are also delays related to complex engineering challenges, like boring a tunnel through Burnaby Mountain or drilling under the Fraser River. Construction on the tunnel began in May and is expected to take 20 months, assuming there are no delays. The drilling under the Fraser River would take 14 to 15 months and is scheduled to begin in October.

Complex megaprojects like TMX are susceptible to cost overruns in part because slight problems can cascade into large delays given there are many moving pieces that have to happen in a certain order. For example, the Crown corporation has to drill the tunnel through the mountain before it can install the pipeline.

“There has to be a point at which these projects no longer make sense, and I think that's especially true when we're talking about a piece of oil and gas infrastructure in a climate crisis," says Eugene Kung, a staff lawyer with @WCELaw. #elxn44

Co-ordination is only half the battle because there are also physical constraints on the construction season, like animal migration and breeding patterns, weather, and, increasingly, forest fires.

“I was driving along the construction route this summer along the Coquihalla Highway, and the day before the July Mountain wildfire swept over the Coquihalla, I was right in a major construction zone that previously was active but had to be evacuated,” said Kung. “That really brought it home, and, of course, the irony of trying to force through or rush through building an oil pipeline while the territory is burning was not lost on anyone.”

Kung said one reason Trans Mountain has been able to “maintain the illusion of being on schedule is by skirting local laws” or by being excused from conditions that were originally imposed.

“By our count, they've requested relief from the regulator 70 times, and we were only able to find one instance when regulators said no to those requests,” said Kung.

One example flagged in the report was from last year when Trans Mountain re-drilled under the Thompson River without first seeking approval of the regulator and requested relief from that requirement.

“This raises concerns that if there were a failed drilling attempt under the Fraser River, Trans Mountain may continue to ignore the CER requirements in order to meet their in-service date, then subsequently ask for forgiveness,” the WCEL report reads.

The construction delays not only add millions to the total price tag, they also mean Trans Mountain is losing revenue it expected to earn.

In an affidavit from last year, Trans Mountain CEO Ian Anderson said each month the company is delayed from bringing the pipeline into service represents about $100 million in lost revenue. In that same document, he also says construction delays of “several months” would result in “hundreds of millions in excess capital costs.”

Kung highlighted federal Climate Minister and Liberal North Vancouver candidate Jonathan Wilkinson’s comments from last month, where he told the CBC revenue from Trans Mountain would be used for climate action, as short-sighted.

“I hope we're not pinning our energy transition hopes on the profitability of this pipeline because from what I can see, that is very dubious in terms of future profitability. And in fact, it's more likely to be a stranded asset than a profitable enterprise,” he said.

“There has to be a point at which these projects no longer make sense, and I think that's especially true when we're talking about a piece of oil and gas infrastructure in a climate crisis.”

An article published Wednesday in Nature examines what percentage of fossil fuels need to stay in the ground to hold warming to 1.5 C, and found that global oil production needs to fall about three per cent annually to 2050 to stay within the threshold. The study concluded that globally, 60 per cent of oil and fossil methane gas, and 90 per cent of coal, has to remain untouched.

“This implies that most regions must reach peak production now or during the next decade, rendering many operational and planned fossil fuel projects unviable,” the article by Dan Welsby, James Price, Steve Pye, and Paul Ekins says.

Climate advocacy group 350’s Cam Fenton said because Canada is a major oil producer, slashing production would have to be higher than the three per cent global average.

“The longer that we wait to actually start phasing out (and) stopping expansion, and then doing a managed decline of production, the larger that per cent per year decline needs to be to meet these targets,” he said. “The higher the per cent you're declining production per year, the more disruptive (it is) economically … to communities, and to workers.”

The study published in Nature estimates 83 per cent of proven reserves in the oilsands are unextractable to stay within Canada’s share of the 1.5 C carbon budget. Canada’s unextractable resources are the highest out of any region, far above the global average of 58 per cent.

The study “directly relates to Trans Mountain,” said Fenton. “It raises serious questions about why are we using public money to build this project?”

NDP Leader Jagmeet Singh has said despite being against TMX, he would not necessarily cancel it, saying he wants to get a clear handle on the project’s finances first.

The Green Party’s platform says it would cancel all new pipelines, starting with Trans Mountain.

The Liberal and Conservative parties did not return a request for comment.