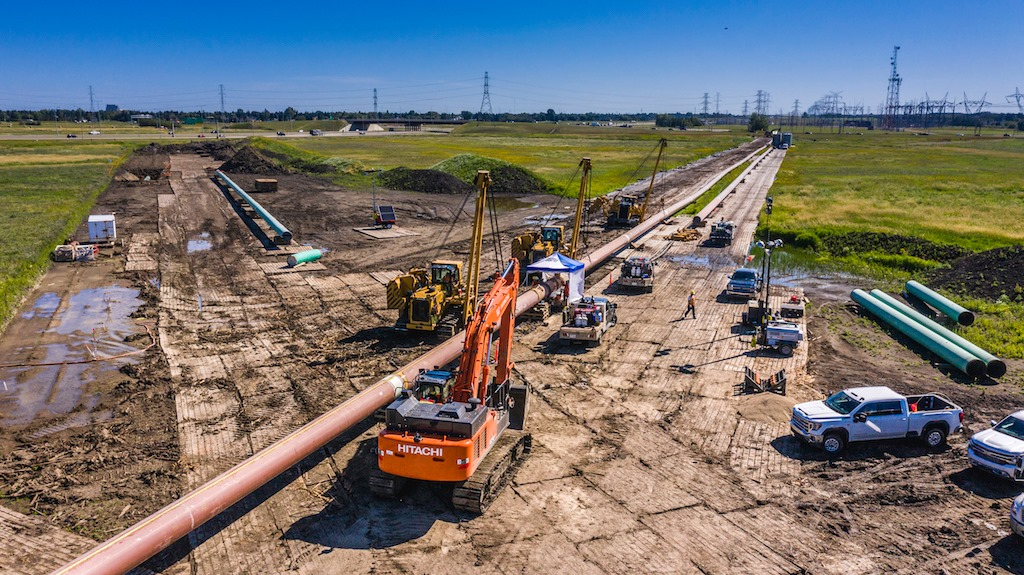 Nearly two dozen environmental and Indigenous organizations have signed an open letter calling on Trans Mountain insurers to drop the pipeline, warning the CEOs of major insurance companies that pressure will continue to mount until they do. Photo by TMX
Previous story
Next story

Nearly two dozen environmental and Indigenous organizations have signed an open letter calling on Trans Mountain insurers to drop the pipeline, warning the CEOs of major insurance companies that pressure will continue to mount until they do.

The letter urges the companies to rule out insuring Trans Mountain, as well as any expansion project for the oilsands, and for the insurance companies to require its clients to obtain free, prior, and informed consent from impacted communities.

It was directed to the CEOs of AIG, Chubb, Energy Insurance Limited, Liberty Mutual, and Lloyd’s of London syndicates, among others.

“​​This limited window for action will close rapidly if we allow expansion of the dirtiest forms of fossil fuels, such as the bitumen that would be carried by the Trans Mountain pipeline expansion project from Alberta to Vancouver, B.C., to proceed,” the letter reads. “This expansion would unleash up to 590,000 barrels per day of tar sands bitumen onto the world market, resulting in the addition of up to 152 million tonnes of CO2 into the atmosphere annually.”

The existing Trans Mountain pipeline, and its expansion, would collectively move up to 890,000 barrels per day.

Insurance companies were intensifying the climate crisis and violating Indigenous rights, said the president of the Union of British Columbia Indian Chiefs, Grand Chief Stewart Phillip, in a statement.

“The Trans Mountain expansion and tanker project would enable a huge expansion of the world’s dirtiest oil despite resistance from Indigenous peoples along its route,” he said. “The pipeline does not have the free, prior and informed consent of all Indigenous communities across whose lands this pipeline passes, and it will continue to face powerful resistance.”

The letter from climate groups also references the Tiny House Warriors, a group of Secwépemc land defenders protesting the pipeline’s construction through its territory, as one example of how Trans Mountain has failed to obtain consent.

“As recent high-profile conflicts over projects such as TC Energy’s Keystone XL and Coastal GasLink pipelines and Enbridge’s Line 3 and Northern Gateway pipelines have demonstrated, proceeding with pipeline construction without (free, prior, and informed consent) represents a serious material risk that must be recognized and addressed,” the letter reads.

The letter goes on to say that if the companies are insuring Trans Mountain, they are “recklessly pursuing profit while ignoring impacts to people and the planet,” and threatened to ramp up action until the organizations’ demands are met.

23 environmental and Indigenous organizations have signed an open letter calling on Trans Mountain insurers to drop the pipeline, warning the CEOs of major insurance companies that pressure will continue to mount until they do. #cdnpoli

Until the companies rule out insuring projects that expand the oilsands sector and require its clients to obtain free, prior, and informed consent, “we will continue spotlighting your failure to publicly disclaim involvement with the Trans Mountain pipeline network and targeting your company for refusing to cut ties with this pipeline, rule out all tar sands expansion, and respect Indigenous rights,” the letter reads.

A recent report from the Indigenous Environmental Network and Oil Change International found that over the past decade, Indigenous resistance to 26 fossil fuel expansion projects in Canada and the United States has, or will if successful, avert 1.8 billion tonnes of greenhouse gases — the equivalent of about 28 per cent of annual Canadian and U.S. emissions.

Argo, one of the companies that previously insured Trans Mountain, recently confirmed it will not cover the pipeline or its expansion project. Since then Scor, Lancashire, and Cincinnati Global have cut ties with Trans Mountain, too.

Trans Mountain is concerned about the dwindling pool of insurers because it means it is paying higher premiums to secure its required coverage. The Canada Energy Regulator gave Trans Mountain the green light to shield its list of insurers from the public for this reason. The company argued if it could not keep its insurers private, “targeting and pressure” could result in a “material loss” to the company and “prejudice the competitive position of its insurers.”

To date, $8.4 billion has been spent on the pipeline expansion, with $2.3 billion spent in the first half of 2021. The company is aiming to have the project finished by the end of 2022.

Both Liberty and AIG declined comment. Chubb and Lloyd’s of London did not return requests for comment by deadline.