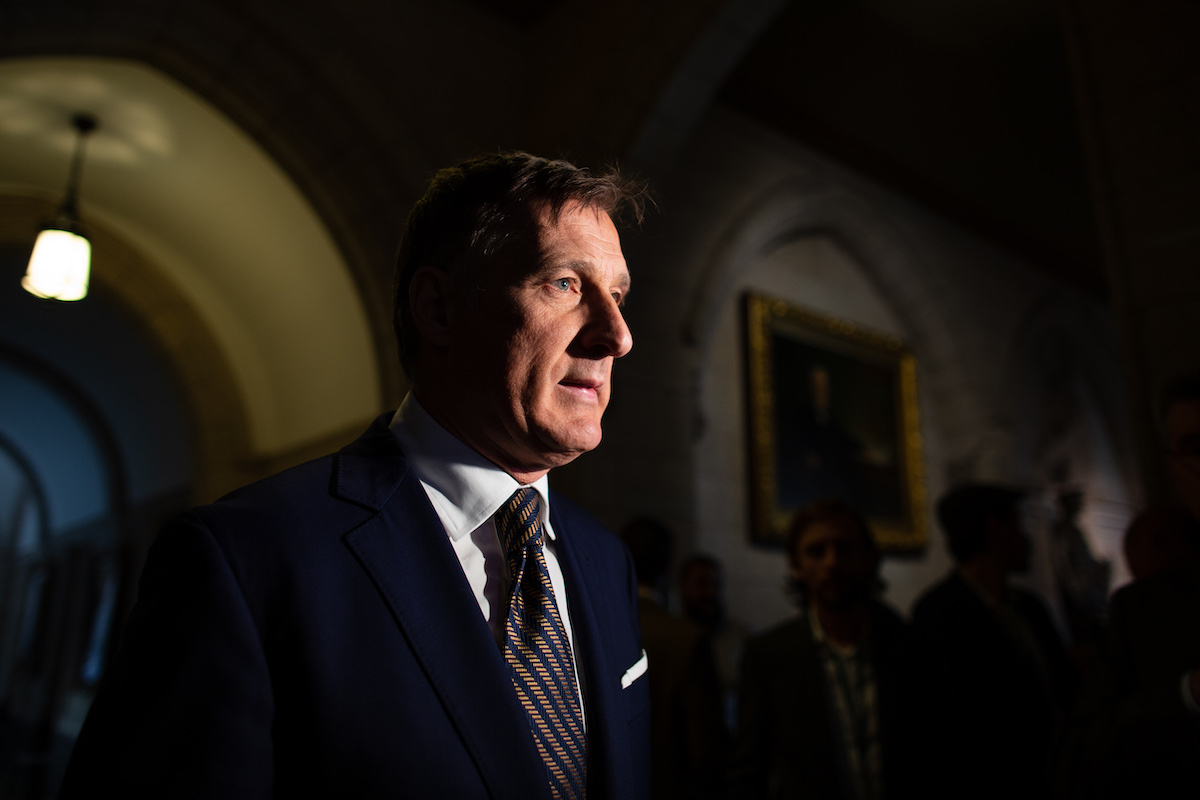 With the federal election looking like a dead heat between the Liberals and Conservatives, this evening’s second of two federal leaders’ debates will certainly play a decisive role in its outcome. But while the five federal leaders with representation in the House of Commons gather at the Canadian Museum of History in Ottawa, the one who won't be there may end up having the biggest impact. Multiple polls put Maxime Bernier’s People’s Party ahead of the Green Party, and some estimate his support as high as nine per cent. It is officially time to take him seriously and start asking some questions about what his rise means for the other five parties.

The venue for tonight’s debate is fitting, given the history of the Conservative Party of Canada looms large over any conversation about the PPC and Bernier. For nearly a decade, Stephen Harper managed to hold together a national conservative coalition that included free market enthusiasts, small government aficionados, gun rights advocates and western populists.

It won him three elections, including a majority government, and seemed to position the party he had forged from the scrap metal of the Progressive Conservatives and the Canadian Alliance for long-term success. Bernier served as a senior minister in Harper’s government and came within an eyelash of becoming party leader in 2017, winning the first 12 rounds of voting before succumbing to Andrew Scheer’s relentless mediocrity on the 13th. But now, he has refashioned himself as the pied piper of paranoid populism in Canada, and he seems poised to blow that conservative coalition wide apart — and with it, perhaps, Canadian politics as we’ve come to understand them.

His party’s policies, such as they are, seem like they’re drawn from the comment threads of a conservative Facebook group. The PPC would “impose pipelines” on provinces, withdraw from the Paris Agreement, cut immigration by more than 50 per cent, reform equalization and completely eliminate capital gains taxes.

But it’s Bernier’s pro-freedom approach to the pandemic that is driving his poll numbers and popularity, and it’s put Erin O’Toole in an obvious bind. While four in five Canadians support vaccine mandates and other pandemic public safety measures, the 20 per cent who don’t are drawn to Bernier and the PPC — and they happen to be otherwise conservative voters. As an Aug. 31 poll from Abacus Data showed, O’Toole’s Conservatives have 44 per cent of the support among vaccine refusers, which puts them 34 points ahead of the Liberals and 19 points ahead of the PPC.

Bernier isn’t about to back down here. In a Leni Riefenstahl-esque video shot at a Sept. 5 rally in Kelowna, Bernier quoted the words of John F. Kennedy in order to justify his crusade against common sense. “In the long history of the world,” he said, “only a few generations have been granted the role of defending freedom in its hour of maximum danger. You are that generation. This is your role. And now is the time.” When Bernier shared the video on Twitter, he raised the rhetorical stakes even higher. “When tyranny becomes law,” he tweeted, “revolution becomes our duty.”

That sort of language is positively tame compared to what some PPCers — including Bernier — have said about Liberal Leader Justin Trudeau. Bernier referred to him as a “fascist psychopath” just last week, while PPC candidate Marc Emery (the erstwhile “prince of pot”) suggested: “He deserves a much worse fate. I’m thinking Mussolini.”

This is exactly what former clerk of the Privy Council Michael Wernick warned about back in 2019 when he said he was “deeply concerned about my country right now, its politics, and where it is headed.” It was “only” gravel being thrown at Trudeau and the journalists around him by a PPC supporter, but it’s not hard to imagine it turning into something much more dangerous — or lethal.

Trudeau and Jagmeet Singh can’t do anything to stop Bernier, given how unpopular they are among his supporters. But O’Toole, his former cabinet and caucus colleague, almost certainly can. After all, his “true blue” leadership campaign was clearly aimed at winning the support of far-right conservatives, and his party has been winking at, and flirting with, these sorts of elements within their coalition for years. They have openly traded in the kind of rhetoric and language about Trudeau that Bernier now wields like a weapon, and have empowered groups like the Yellow Vest movement that now flocks to his rallies in droves.

Now, O’Toole and the Conservative Party of Canada face a choice: stand up to the monster they’ve helped create and risk losing a few seats, or cater to its beliefs in the name of political power. We may find out tonight which path they’re going to take.

When Bernier launched his

When Bernier launched his party the National Post published a sort of manifesto where Bernier said he was a follower of the economic school of thought called Public Choice Theory. I've never seen anyone ask him about that. According to the book "Democracy in Chains" by Professor Nancy Maclean, Public Choice Theory is an economic philosophy developed with the support of the Koch brothers. No wonder they want to force pipelines everywhere and reduce capital gains taxes. The theory also posits that the problem with democracy is the majority can abuse minorities. The victim they care most about is the beleagured minority of the extremely rich who are forced to pay taxes for things they don't want or need. Since a party is unlikely to win any seats openly promoting these ideas stealth is necessary. These ideas I've been remarkably successful south of the border and now they actually have their thumbs on the throat of democracy there. Let's not let that happen here.

Important points.
I've always wondered just how seriously Bernier takes any of this. I mean, he's Quebecois; Quebec barely has any of this kind of culture, and most of the people in the culture he's pandering to are normally pretty rude about Quebec. Back when he was in Harper's cabinet I don't remember hearing anything about him being one of the hard right crazies. It seems like he just got really annoyed when he lost the leadership race to Scheer, and if he wanted to spite Scheer by playing spoiler the available space to grab was the hard right loonies, so that's what he did. Now he's riding the tiger, although he's apparently having fun with it so far.
So, basically, rather than a fanatic ideologue, I read him as a cynical bastard willing to deeply damage the country for his rather petty, nasty ends. In that one respect if in few others he's quite a bit like Trump.

I'm extremely worried about the rise in popularity of the PPC. Thank you JB for your comments linking Maxime Bernier to Public Choice Theory and the book Democracy in Chains (what an ironic and twisted title since their intent seems to be to destroy democracy). Not surprising that the Koch brothers are behind all this. The anti-vaxxers seem to be attracted to this party because of the calls for "freedom," but they don't seem to be aware of the PPC's other dangerous policies.

is it a rise in popularity or

is it a rise in popularity or an opportunity to separate an already pre-existing Reform Party element living in the CPC? I'd rather a spotlight on the Devil than one hiding among a group of persons waving the flag of a self-proclaimed center-right moderate party.

Maxime should not be allowed

Maxime should not be allowed to run for PM. He should not be getting arrested breaking laws to protest while running for the office responsible for drafting laws & enforcing the rule of law. How is he supposed to genuinely and legitimately expect others to do follow laws he is responsible for drafting, promoting, passing, etc? He of all persons is expected to use the process to change laws he does not agree with. He has the finances to challenge laws he believes are unjust unlike average citizen engaging in civil disobedience.

These guys are all like Mark Zuckerberg, who said he "wants to move fast and break things."

To care more about life than

To care more about life than money and power is the only defence humans have.

Quite possibly Bernier is

Quite possibly Bernier is playing out the infamous mid-life crisis. As a politician he sees the walls closing in, relegating him to the lint filled pockets of irrelevance.. Busting out of that fate by aligning himself with the adolescent fantasies of the demagogues and offering up whatever integrity he might still harbor to the likes of the Koch Industrial/Oligarchic complex may seem like an attractive and lucrative alternative. Principles like democracy, freedom, self-determination seem to have been left in the dust of his spinning wheels.

Monsters don't usually recognize themselves as monsters is the thing.

I don't think it is conducive

I don't think it is conducive to call each other names. Let us stick with respectful discussion. By the way, I decided to get vaccinated, but I still support the freedom over one's own body. Call me antivax, but do not conclude that I support the PPC.

Whatever they are called

Whatever they are called "Libertarians", or "Capital Fir$ters" or the remnants of the Deformed Party, the premise that Capital is privileged to vote in addition to Citizens is what the Koch brothers and a substantial rump of the Conservative Party are attempting to quietly promote. Erin is just the Toole in that process.

History teaches us everything

History teaches us everything we need to know to develop an understanding of what is going on with Bernier and his followers. Unfortunately those that "follow" the likes of Bernier have no knowledge of the past horrors created by the likes of him. History also teaches us that there are weaknesses in the Democratic process that allow this rise to occur. This is not going to end well for Canada or it's people as we wander into this trap of ignorance and hatred.

I actually heard the PPC

I actually heard the PPC candidate for Calgary Confederation talk about his response to COVID and it really made me angry. I sent an email and he just revealed his ignorance. I am not surprised that Marc Emery is running although I thought that he would not want to associate with the loony right. It definitely has lowered my opinion of him, which was not to begin with. I actually briefly met Jodie Emery and I was also not very impressed.