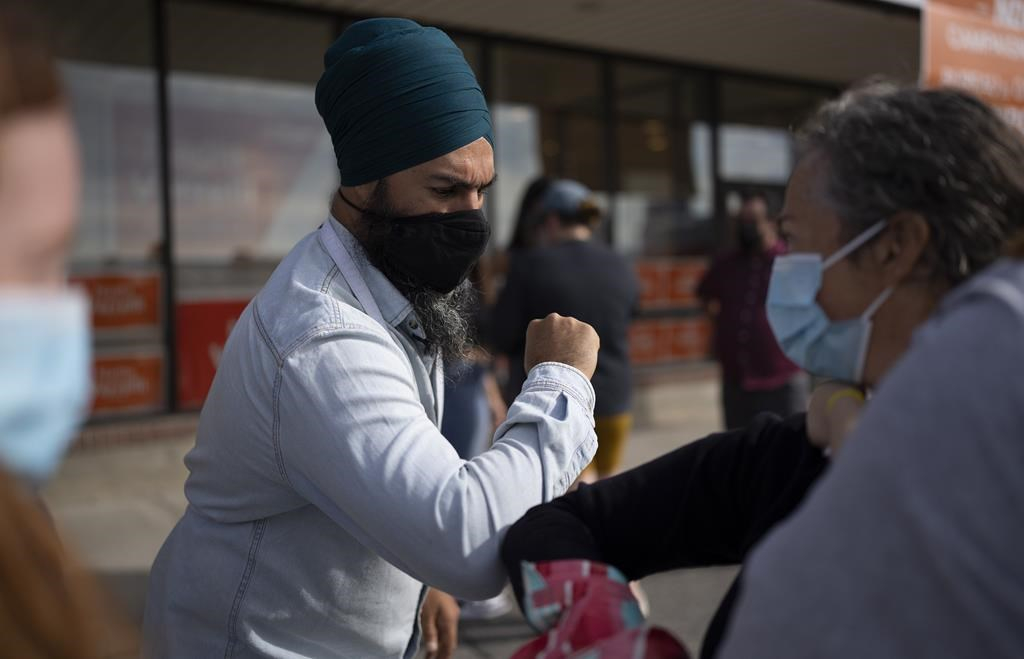 The fifth and final week of the federal election campaign kicked off Sunday with the Liberals and New Democrats each questioning whether their opponent's plan to pay for the billions of campaign spending promises was based in reality.

The New Democrats are promising a far-ranging plan to create social programs like pharmacare and dental care through $214 billion in new spending over five years.

NDP Leader Jagmeet Singh is vowing to pay for some of it by raking in $166 billion in new revenues by taxing the super-rich and ultra-profitable corporations.

The numbers are far higher than those in the Liberal platform, which similarly proposes new taxes like raising the corporate rate levied on bank earnings over $1 billion to help fund programs intended to boost recovery from the COVID-19 pandemic.

Speaking on Montreal's South Shore, Trudeau took aim at the NDP over that party's plans to raise billions in new revenues, suggesting there is a ceiling to how much a government can tax the wealthy.

"We have to make sure that the wealthiest are paying their full and fair share and we've done significant things towards that," Trudeau said.

"But the idea that you can go with unlimited zeal against the successful and wealthy in this country to pay for everything else is an idea that reaches its limits at one point, and I don't think the NDP get that."

During a campaign stop in Sudbury, Ont., He argued Trudeau has given the wealthy a free ride during the Liberal leader's six years as prime minister by not collecting billions in potential revenues.

"I'm not surprised that he said that, 'oh, limit your hopes and aspirations around making sure that billionaires pay their fair share.' I've long been saying he's been defending the super-rich, he's on the side of the billionaires, and that's just more evidence of it," Singh said.

Leaders argue over how to pay for promises as voters head to advance polls. #ItsOurVote #CdnPoli #Elxn44

The parliamentary budget officer has warned there is only so much space to add new spending on federal books before deficits become a problem to rein in. Only Conservative Leader Erin O'Toole is pledging to balance the budget, and that's within a decade.

The Institute of Fiscal Studies and Democracy at the University of Ottawa flagged the Conservative balanced-budget promise in its analysis of the party's spending plans.

Speaking in Vancouver, O'Toole said his party's fiscal plan was "disciplined but fair" and pointed to the current budget officer's evaluation to support the Conservative platform estimates.

"The parliamentary budget officer confirmed our plan. We submitted 30 different policies for his analysis," O'Toole said.

"We will balance the budget within the decade."

The comments marked the start of the final push as each party is looking to both bolster support on the Sept. 20 election day, but also persuade voters heading to advance polls this weekend.

Elections Canada said early estimates show more than 1.3 million voters cast their ballot in-person on the first day of advance polls on Friday, which is more than what was recorded during the 2019 election.

With polls suggesting a tight race, the leaders have elbowed for room and ratcheted up the rhetoric in what's been an emotional campaign that has shown little sign of cooling down.

1/2 Last night, while my family and I were sleeping someone came onto my property to vandalize my car.

This was clearly an attempt to intimidate me and my campaign.

I am disheartened to see this, but I know this isn’t who we are as a community. pic.twitter.com/5UuAv4lc5u

Trudeau looked Sunday to lay blame for tensions at the feet of Maxime Bernier, the leader of the People's Party of Canada, which polls suggest has steadily seen a rise in national support.

Trudeau, like Bloc Leader Yves-Francois Blanchet and O'Toole, dismissed any concerns that Bernier's candidates could siphon support from their parties.

While Singh said he disagreed with many of Bernier's views, the NDP leader added that he understands the general feeling of frustration and cynicism some voters have with federal politics after seeing governments fail to live up to campaign promises.

This report by The Canadian Press was first published Sept. 12, 2021.

How We Think About the

How We Think About the Deficit Is Mostly Wrong
https://www.nytimes.com/2017/10/05/opinion/deficit-tax-cuts-trump.html

"When there’s a deficit, some of that new money can be traded in for a government bond. What’s often missed in the public debate is the fact that the money to buy the bond comes from the deficit spending itself.

***
Of course, there are real limits to what can be done. No country can commit to large-scale infrastructure investment unless it has the available labor, machinery, concrete and steel. Trying to spend too much will cause an inflation problem. The trick is to adjust the budget to make efficient use of the people, factories and raw materials we have."