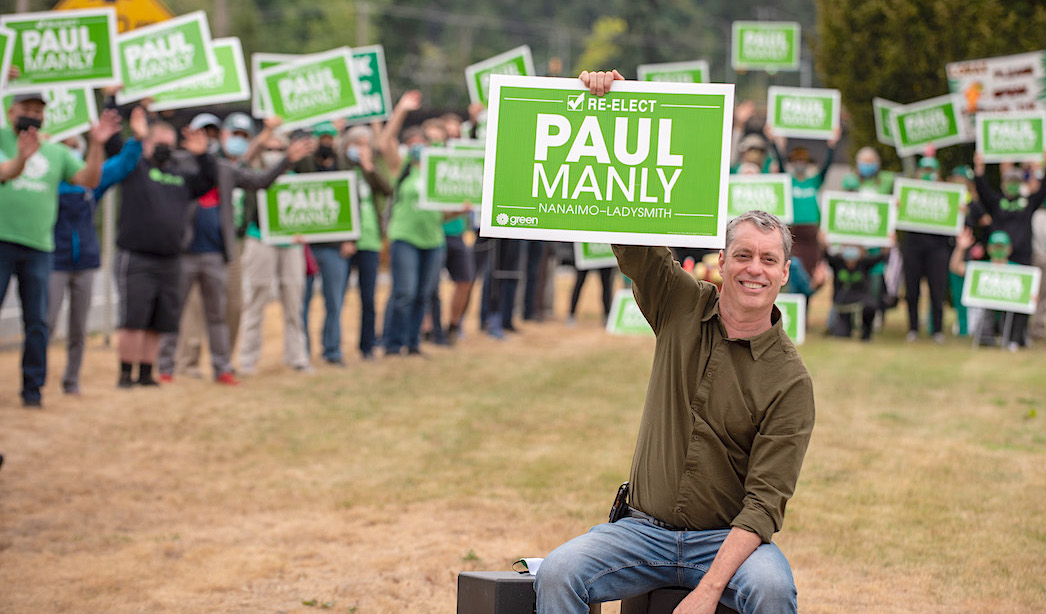 Vancouver Island is a long way from the seat of power in Ottawa, but it's a vital battleground this election for the survival of the federal Green Party.

The party’s only two incumbent candidates, former leader Elizabeth May and Paul Manly, are hoping to retain their toehold on the southeast tip of the island, despite bitter infighting between the party’s leader, Annamie Paul, and some of the party’s brass that dragged on until the eve of the election.

Election observers suggest May’s Saanich-Gulf Islands riding is in the bag, given she has handily won the Greens’ historic first seat three times since securing it in 2011.

However, pundits predict it will be an uphill struggle for Manly, who won the Greens’ second seat in Nanaimo-Ladysmith in a byelection in May 2019. Manly secured it again six months later in the federal election with a healthy margin of 5,000 votes over his nearest Conservative competitor.

Regardless, Manly’s campaign is most likely being hobbled by infighting and acrimony between the party’s executive and Paul, who succeeded May in October 2020, said Kim Speers, a political scientist at the University of Victoria.

Paul escaped facing a non-confidence vote in July. And the month prior, Fredericton MP Jenica Atwin crossed the floor to the Liberals following party disputes over the Israeli-Palestinian conflict — taking the Greens’ third seat and the only one outside B.C. along with her. The internal squabbling so close to the election doesn’t build voter confidence in the party, Speers said.

“People aren't really sure what the Green Party is going to look like after the election,” Speers said Wednesday, noting polls put the party at an all-time low and trailing the People’s Party of Canada.

“So, I can understand why there might be some hesitancy around voting for the Greens right now.”

But Manly is undeterred, insisting what’s happening federally is not being reflected on the ground in the riding, and voters will look at his record independent of the party’s woes.

The former filmmaker and communications specialist says his campaign had a strong start out the door, and momentum is good given he’s a well-known entity in the riding who has successfully advocated across party lines around issues local voters care about.

Pundits predict #GreenParty candidate Paul Manly won't regain his seat due to turmoil at the leadership level, but the Nanaimo-Ladysmith incumbent says voters will back him based on his work in the riding and in Ottawa. #elxn44

“I have lots of support from progressive voters because it’s not just about climate change in this riding,” Manly said, noting he has championed affordable housing, changes to seniors’ long-term care, universal dental and pharmacare, and guaranteed livable income.

“People see that I'm leading the discourse in the House of Commons on a lot of these things,” he said, adding the party has a newly elected federal council, and he wasn’t embroiled in the conflict.

Regardless of Manly’s record, Speers doubts his campaign can overcome the Green Party’s struggles.

“It doesn’t matter how good an MP is, he’s just been affected by those external variables that are kind of beyond his control and that happen in elections all the time,” Speers said.

While Vancouver Island has been a hot spot of Green support, much of that depended on May’s popularity as leader, she said.

May squashed the competition in 2019, winning 49 per cent of the vote, more than doubling the ballots of her nearest Conservative competitor David Busch, who secured 20 per cent and is running again this election.

But May’s mantle of popularity probably won’t benefit Manly — who also can’t count on a bump from Paul given the leader hasn’t left her Toronto Centre riding area to campaign nationally and isn’t likely to, Speers said.

“With the new leader not travelling across Canada, not visiting Vancouver Island which has really strong Green support, I don't think that's helped the Green Party's overall level of support.”

Paul is unlikely to win her seat, or survive the leadership review slated for the fall, which signals further turmoil for the party, Speers added.

Leadership transitions can be bumpy, Manly said, pointing to NDP Leader Jagmeet Singh’s popularity struggle before he won his Burnaby riding in a byelection in 2019 nearly 18 months after becoming party leader.

Now, in terms of leader favourability, Singh is leading the polls, if not in voter intention.

The NDP is likely the Greens’ biggest competitor for the progressive vote on Vancouver Island, and school board trustee Lisa Marie Barron is the party’s candidate for Nanaimo-Ladysmith.

But there’s the possibility the federal NDP may pay a price for the perceived sins of its provincial counterparts, said Kathryn Harrison, a professor of political science at the University of British Columbia.

“What can happen in federal elections is that people's frustration with a provincial government can spill over into the vote,” Harrison said.

“And one of the challenges I suspect for Jagmeet Singh is that there are a lot of Green voters who are unhappy with the John Horgan government right now.”

“(The NDP) rail against the Trans Mountain pipeline, but I can’t even get Jagmeet Singh to say a word in the House of Commons when I ask him if he’ll support a ban on fracking,” Manly said.

Despite the NDP taking every other riding on Vancouver Island save those won by the Greens in the last election, the Conservatives — represented this election by Tamara Kronis — proved to be the closest competition for the Greens in Nanaimo-Ladysmith in the last vote.

Manly’s first foray into federal politics under the Green banner in 2015 resulted in a tight four-way race where he took 20 per cent of the vote for the Greens, and then boosted that by 15 percentage points to win the riding in the next election.

The Conservatives’ performance in the riding has remained more or less steady the last two elections at about 25 per cent of the vote.

Manly said while he’s confident about his chances of re-election, he’s not taking any chances and is making every effort to regain his seat.

“I’ve worked hard before I was an elected official,” he said.

“And as MP, I worked hard for the community and will always work hard.

“I take nothing for granted.”

This election could decide how Canada fights plastic pollution. Here's where the parties stand

Manly is arguably the best

Manly is arguably the best representative for the Nanaimo riding, but he is harmed by Paul's support for Israeli crimes against Palestinians, straying far off base of the Green Party's environmental platform. So Speers is wrong in her opinion that Paul's not visiting Vancouver Island has hampered the Green Party's overall level of support on the Island. Paul's Zionist support would have killed any chance for Manly to have a shot of re-election.

It may well be true that

"But May’s mantle of

"But May’s mantle of popularity probably won’t benefit Manly — who also can’t count on a bump from Paul given the leader hasn’t left her Toronto Centre riding area to campaign nationally and isn’t likely to, Speers said."
I do not appreciate Speers' speculation about Elizabeth May's record not benefiting Manly. They are both well respected on Vancouver Island, and are seen as part of a Green team. Annamie Paul has been a disaster in the Green Party from the start. It's better if she stays away.