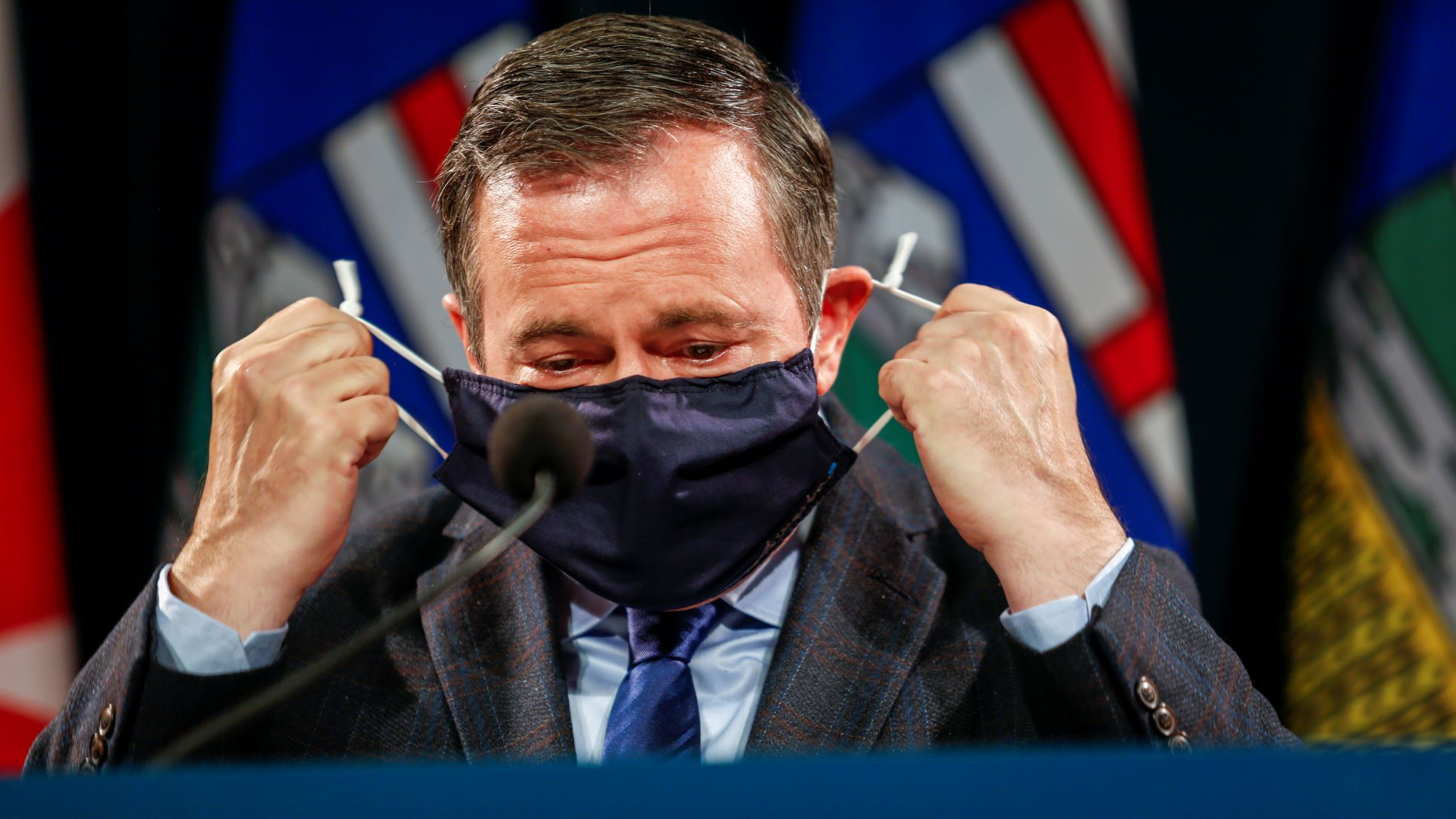 You could tell that Jason Kenney didn’t want to be there. Just five days before a federal election in which he has a clear rooting interest, the premier of Alberta was forced to announce a raft of new restrictions aimed at preventing his province’s healthcare system from collapsing under the weight of COVID-19 — all because he insisted on opening his province up faster than anywhere else in the country. It was a gift to his mortal enemy, Justin Trudeau, and a dagger in the heart to the Conservative leader he’d endorsed and supported from day one. And as if to add insult to these injuries, PPC leader Maxime Bernier accused him of being a “despot” and said he was flying west to campaign against him. After a summer of playing the stupidest game possible, it seems Jason Kenney has won himself a suitably stupid prize.

Time will tell whether the UCP’s new measures, which include a vaccine passport that’s being sold as a “restrictions exemption program” along with a dizzying range of additional restrictions and curtailments, will prevent the province’s healthcare system from buckling. Alberta’s doctors may yet have to use their triage protocols, which determine who they choose to treat and who they choose to ignore under extreme circumstances. But it’s clear Kenney invoked a political triage protocol that involved putting his own partisan interests and political health above that of Erin O’Toole and the Conservative Party of Canada. If the latter has to die so the former can continue living, well, so be it.

Kenney's freedom-first approach to managing COVID has boomeranged Alberta into the position of having the most restrictions in Canada. And nobody in Kenney’s government has actually taken personal responsibility for their failure yet. The inimitable Tyler Shandro still has his job as Health Minister. So too does Deena Hinshaw, the province’s chief medical health officer, whose advice was apparently central to the decision in August to switch from a pandemic to endemic state and stop mandatory testing and isolation. And Kenney, despite being one of the most unpopular premiers in Alberta’s history, remains at the top of the pecking order — for now, anyways.

In the course of his remarks about the need for new measures, Kenney offered up a perfunctory one-line apology for some of his government’s recent choices. It had the sorry-not-sorry sincerity of a kid being forced to apologize to their younger sister for something they didn’t think was actually wrong.During the press conference when Calgary Sun’s Rick Bell invited him to elaborate on his apology, Kenney walked it back instead. “You can’t sustain serious intrusions into people’s lives permanently. So no, I don’t apologize for the decision to relax public health restrictions in the summer.” Earlier this week, Hinshaw disavowed that assessment. In a meeting with Alberta doctors on Monday, she said that "I think that trajectory was set when we removed all the public health restrictions in July.”

But regardless of which policy blunder set Alberta on the course that has resulted in its ICUs and hospitals filling up well past their normal capacity with COVID-19 patients, it’s clear that Kenney doesn’t actually think his government has done a bad job here. He repeatedly cited Alberta’s per-capita death rate as an example of how his government had successfully handled the pandemic, and presented an obvious straw man as proof that it was occupying the moderate middle ground. “If the alternative is just permanent, unmovable, consistent, hard lockdown-style policies,” he said, “I think you’d see even greater anger than the frustration you see today.”

Kenney isn’t the only prominent conservative who’s letting logical fallacies blind them to the unpleasant realities of Alberta’s performance on COVID-19. Rachel Curran, the former director of policy for Stephen Harper and Facebook’s public policy manager for Canada, described the current crisis as “nothing more than the usual Covid problem.” Like Kenney, she cited Alberta’s per-capita death rate as an example of why, in her words, “Albertans are getting through Covid in *relatively* good shape.”

But those death rates are a trailing indicator, and they include the first three waves when we knew far less about the virus and how to contain it than we do today. Right now, Alberta has a per-capita death rate three times higher than Ontario’s and eight times higher than Quebec’s. Those provinces seem to have learned something from the first three waves, and have adjusted their approach accordingly. Alberta’s government, on the other hand, can’t seem to stop making the same mistake over and over again.

You’d think that at some point, Jason Kenney would get tired of being hoisted on his own freedom-shaped petard. But it’s clear to almost everyone now that the “best summer ever” is going to lead to the fall from hell for Albertans, and it may end with Kenney unintentionally helping elect Liberals in Alberta on Sep. 20. The only real question left is whether Kenney himself is going to pay a political price or not — and if so, just how high it will be.

“You can’t sustain serious intrusions into people’s lives permanently. So no, I don’t apologize for the decision to relax public health restrictions in the summer.”

Hmm. I'd think of untimely death as a rather serious intrusion ... and not far behind that would be a month or so on a ventilator ... with severe deconditioning and unlikely return to former levels of well-being.