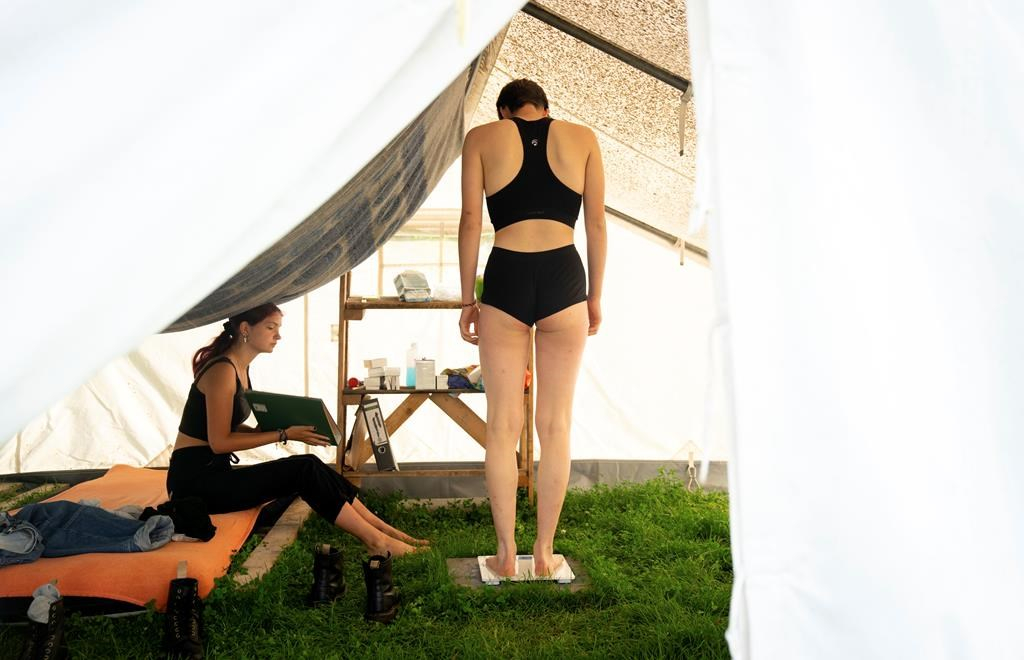 In this Sept. 15, 2021 file photo, Lina Eichler, right, stands next to Mephisto in a tent near the Reichstag building in the morning on a scale in Berlin, Germany. File photo by Kay Nietfeld/dpa via AP
Previous story
Next story

Youth activists are hoping to turn up the heat on governments Friday with the first large-scale international protest against climate change in six months.

Greta Thunberg and fellow activists said Monday they plan to stage demonstrations in cities around the world, weeks before leaders gather for a U.N. summit in Glasgow.

“It has been a very, very strange year and a half with this pandemic, but of course, the climate crisis has not disappeared,” Thunberg told reporters. “It’s the opposite, it’s even more urgent now than it was before.”

Recent scientific reports paint a dire picture of the international effort to curb greenhouse gas emissions, and the U.N. warned this week that more needs to be done if the goals of the 2015 Paris climate accord are to remain within reach.

Vanessa Nakate, a campaigner from Uganda, said the protest on Friday would focus on climate justice, highlighting how those countries that have historically contributed the least to global warming are seeing some of the most brutal impacts, from droughts to floods and famine.

Referring to the upcoming U.N. climate meeting known as COP26, Nakate said “we expect that leaders are going to give talks, speeches and sweet nothings.”

She urged governments that have pledged to sharply reduce their greenhouse gas emissions to follow through by not building new fossil fuel infrastructure such as coal-fired power plants or oil pipelines.

Germany is expected to see some of the biggest protests, two days before the country goes to the polls to elect a new parliament. Many voters have cited climate change as the main issue in Sunday's election, though the environmentalist Green party isn't currently forecast to win.

“The real scandal of this election is that in the year 2021, in the midst of the escalating climate crisis, no single party dares to speak up about what needs to be done,” said German campaigner Luisa Neubauer.

A small group of activists staging a hunger strike outside the chancellery for the past three weeks have threatened that they will stop consuming liquids, too, unless the three leading candidates to succeed Angela Merkel as German chancellor agree to meet them by Thursday evening.

Merkel's spokesman, Steffen Seibert, expressed concern for the activists' health Monday and said the government considers climate change to be “the central issue of our time,” but declined to say whether Germany's long-time leader planned to intervene.

“Democracy is not just on election day,” she said. “We also have to be active democratic citizens and go and go out on the streets and demand action.”