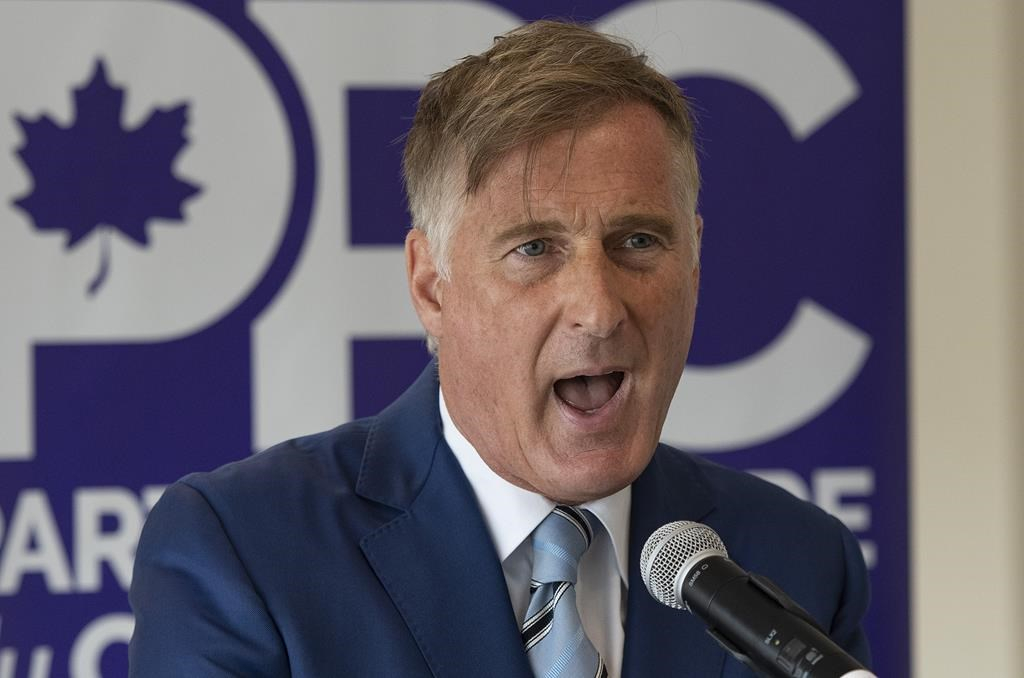 People's Party of Canada Leader Maxime Bernier responds to reporters' questions after launching his campaign during a press conference at a hotel in Saint-Georges, Que., on Aug. 20, 2021. Photo by Jacques Boissinot / The Canadian Press
Previous story
Next story

In a tweet Wednesday, Bernier called three journalists from mainstream news outlets “idiots” and listed their emails, writing: “They want to play dirty, we will play dirty too.”

He encouraged his 160,000 followers to contact the reporters, posting excerpts of their requests for comment after Monday's federal election.

“(T)ell them what you think of their disgusting smear jobs,” Bernier wrote.

The reporters from CTV News, Global News, and the Hill Times had asked about the PPC's endorsement by white nationalist groups, fears among racialized Canadians about what the party represents, and whether it tolerates potential acts of hate by supporters on the campaign trail.

The party did not immediately respond to a request for comment from The Canadian Press.

The Canadian Association of Journalists said journalists have a legal and ethical obligation to send questions to politicians and that going after reporters for doing their job is “unacceptable and dangerous.”

“Mr. Bernier's effort to harass journalists, to sic his followers on journalists for basically just doing their job and asking questions and holding them to account, it is absolutely deplorable,” he said in an interview.

Jolly compared Bernier's tack to some Republicans' efforts at “demonizing the press.”

In a tweet Wednesday, the leader of the #PPC #MaximeBernier called three journalists from mainstream news outlets “idiots” and listed their emails, writing: “They want to play dirty, we will play dirty too.”

“He's channelling, it seems, a lot of the same behaviours that we see from American politicians and their relationships with the media,” he said. “This is what we've seen with Donald Trump and other right-wing politicians.”

Founded by Bernier in 2018 after he narrowly lost the Conservative leadership race to Andrew Scheer, the People's Party of Canada occupies turf to the right of the Tories, advocating drastically reduced immigration levels, withdrawal from the Paris climate accord and opposition to COVID-19 restrictions and vaccine passports.

During the election campaign, some protesters against vaccination measures touted PPC signs. The party booted one of its Ontario riding association presidents after allegations surfaced he threw gravel at Prime Minister Justin Trudeau at a whistle-stop in London, Ont.

Police later charged Shane Marshall in the incident. The suspect shared the name of the former PPC riding association president, but the party did not confirm they were the same person.

Bernier condemned the attack in a tweet, saying that “physical violence is always wrong.”

The former Tory cabinet minister, who self-identifies as a “limited-government conservative,” drew boisterous crowds over the past month as he campaigned against vaccine mandates and pandemic lockdowns amid a surging fourth wave.

Note to readers: This is a corrected story. An earlier version incorrectly reported that Twitter removed Bernier's tweet. In fact, it required him to remove the post.

This article was updated to reflect that Bernier lost the 2018 Conservative leadership race to Andrew Scheer, not Erin O'Toole.