What will Canada's relationship with China be with the two Michaels free? 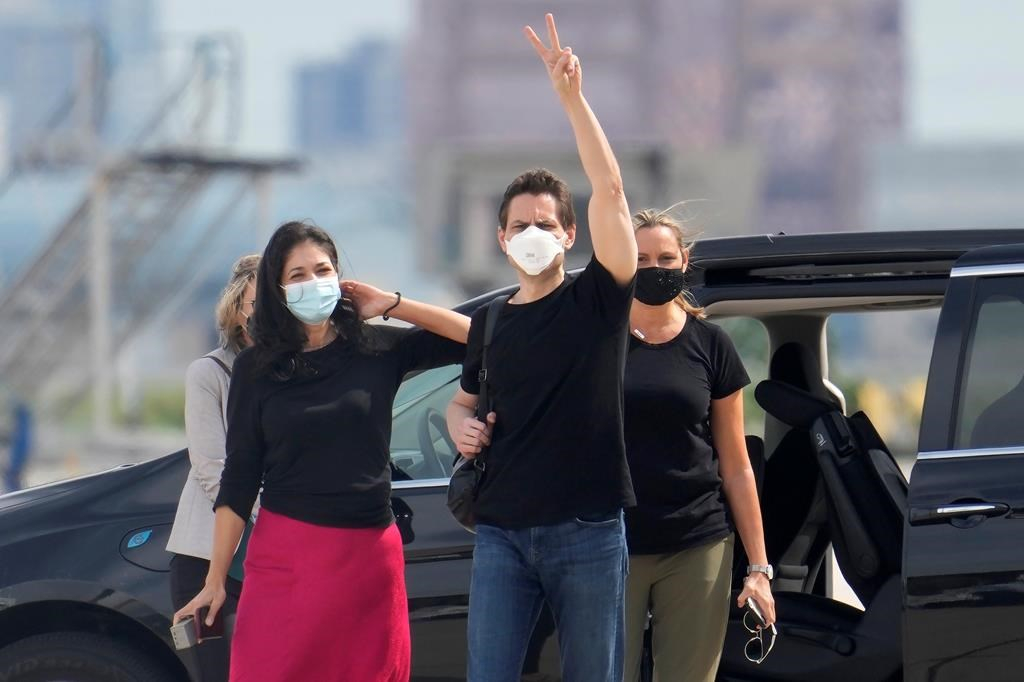 Michael Kovrig, centre right, waves to media as his wife Vina Nadjibulla, centre left, and sister Ariana Botha after his arrival at Pearson International Airport in Toronto on September 25, 2021. File photo by The Canadian Press/Frank Gunn
Previous story
Next story

While the return of two detained Canadians has ended a contentious dispute between Canada and China, experts say Ottawa now faces some hard choices when it comes to Beijing.

University of British Columbia professor Paul Evans, one of Canada’s top experts on China and Asia, expects a number of decisions to be rolled out in the coming weeks and months now that Michael Kovrig and Michael Spavor have been returned home.

Among the decisions Evans is expecting is whether to let Chinese telecom giant Huawei participate in Canada’s 5G wireless network, and the extent to which Canadian universities will be allowed to work with Chinese entities.

The Liberals promised in their election platform that they would develop a comprehensive strategy for the Asia-Pacific region, which Paris says is long overdue and will be needed to navigate what will be a challenging relationship.

Spavor and Kovrig were released after being held in Chinese prison for more than 1,000 days in apparent retaliation for Canada's arrest of Huawei executive Meng Wanzhou.

Wanzhou was released from Canadian custody Friday after reaching a plea deal with authorities from the U.S., where she had faced fraud charges.

So, this makes clear that

So, this makes clear that when it gets serious you need to ignore what Chinese diplomats and such are actually saying. Even now, nobody involved is saying a word of truth--the Chinese are STILL claiming that letting those two guys go on the very same day they got their princess back was a total co-incidence, while the Americans are claiming they never cut any deal it was just all the justice department doing non-political justice department things, while the Canadian politicians have been wittering on about how we put the snatch on her in the first place because of the Rule of Law and not to kidnap a bargaining chip for Trump. If anyone believes any of that from any of the parties I have a bridge to sell them.

So like, maybe we should consider not messing with them. As much as we can get away with, anyway, with the Americans right next to us with a very big stick wanting China messed with.

I'm hoping that Canada will

I'm hoping that Canada will finally not allow Huawei to develop our 5G network because it poses a significant security risk. The other "Five Eyes" countries have already done so. Please see the article by Richard Fadden and Brian Lee Crowley:https://www.macdonaldlaurier.ca/huawei-5g-canada-must-unapologetically-p...
Under China's National Intelligence Law the Chinese government can force Huawei to share Canadians' personal information.

Unfortunately Huawei has made significant inroads into Canadian society, businesses and institutions. They have donated millions to some of our universities (SFU, Univ. of Alberta, Univ. of Waterloo to name a few) for research. They have also offered their technology to internet providers in rural areas at a low price.

I'm no expert on this topic, but I think Canadians and the Canadian government need to wake up to the threat of the Chinese government.