By Jenny Uechi | News | September 28th 2021
#7 of 98 articles from the Special Report: COP26: Uniting the World to Tackle Climate Change 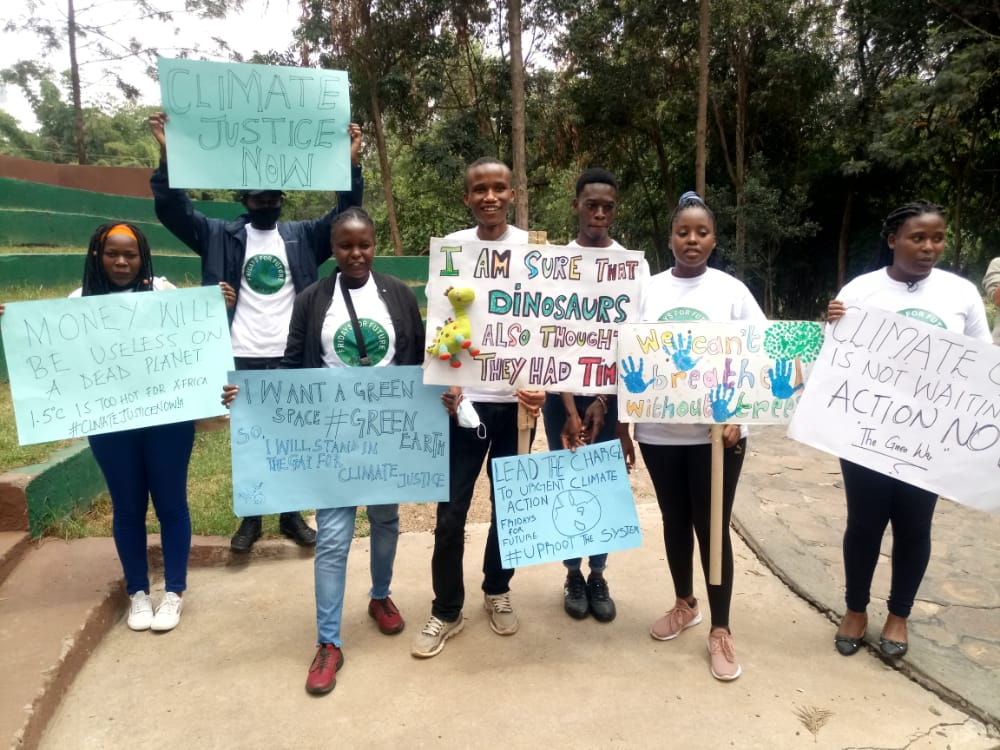 In the lead-up to the United Nations climate talks in Glasgow, climate advocates from across Africa took co-ordinated action to highlight how extreme weather and environmental degradation would affect their lives.

Youth activists in major cities in Ghana, Kenya, Benin, Nigeria, Uganda, Togo, and the Democratic Republic of Congo staged protests, delivered petitions to leaders, and dropped banners protesting climate change. For them, the prospect of a warming planet isn't something that might affect future generations — it already impacts their lives today.

According to the Global Climate Risk Index, some of the most vulnerable countries to climate change are on the African continent, despite the fact its people have among the lowest emissions per capita. In the UN's State of the Climate in Africa 2019 report, key risks to agriculture include reduced crop productivity associated with heat and drought stress and increased pest damage, disease damage, and flood impacts on food system infrastructure, which could result in conflicts and mass migrations. In the worst-case climate change scenario, a reduction in mean yield of 13 per cent is projected in West and Central Africa, 11 per cent in North Africa, and eight per cent in East and Southern Africa.

Colonization at the roots of climate crisis

Landry Ninteretse, Africa regional director of environmental group 350.org, said young people in Africa are speaking up about climate because they know their very lives will be at stake if they don't take action.

“The climate crisis is rooted in the way our political and economic systems have been exploiting and abusing Mother Earth and natural resources since the Industrial revolution,” he said.

He said the climate risk faced by millions of people in Africa, as well as small island nations, are the “consequences of centuries of fossil fuels extractivism, colonialism, exclusion, and systemic violation of basic rights of local communities by rich nations working hand in hand with some elites in the Global South.”

He urged wealthy developed nations to own up to their role in the global climate crisis by assisting countries that don't currently have the wealth or infrastructure necessary to adapt to an extreme climate future.

“While many African countries have committed to transitioning to green energy within a relatively short time frame since 2015, they must be adequately and sustainably supported by the very rich and mega-polluters nations that have historically caused the climate crisis,” he said. “This means supporting adaptation and mitigation plans and projects, facilitating transfer of technology, and honouring commitments made so far.”

Ninteretse expressed disappointment that even in 2021, leaders of the world's richest countries still hadn't fulfilled their pledge from over a decade ago at COP15 in Copenhagen to commit $100 billion a year to poor nations in order to build infrastructure to adapt to climate change. But meanwhile, China has provided cumulative loans of US$150 billion since 2000 to help countries beef up infrastructure — including transport and power projects — to prepare for the changing climate. While some criticize the investments as a bid to distract from its own role in environmental degradation in the region, others say it's better than taking no action.

“The U.K., U.S., Japan, Russia, Australia,and other fossil fuels projects and increasing support in developing green and low-carbon energy that meet the needs and interests of the people and communities first instead of the ones of the corporate sector and extractive industries,” Ninteretse said. “Developing countries want urgent and real action in cutting carbon emissions, effective support to their adaptation and mitigation plans, and reparations of historical emissions and damages caused.”

Ninteretse added that many environmental advocates take on huge personal risks when they protest corporations or government on climate. According to Global Witness, the number of environmental defenders being killed has increased at an alarming rate, with at least four environmental defenders killed somewhere in the world each week. He said activists often face threats and intimidation as major fossil fuel projects tend to be backed by government or powerful corporations that don't hesitate to “silence anyone challenging their ventures.”

“However, today's African youths are bold, ambitious, and action-oriented. Despite the risks, they have decided to speak up and demonstrate their determination to protect Mother Earth, climate, and (the) future.”

Thanks for giving space to

Thanks for giving space to Ninteretse and 350.org. “Reparations” should get mentioned more often. I agree that despite China’s major coal burning, the internationalism of their approach is preferable to anything the West has on offer. It’s sad that we are measuring climate seriousness in billions of dollars rather than in carbon reductions, but money spent is better than money promised.
(Also, at time of this post, there’s something wonky in the opening lines of 3rd para from bottom.)