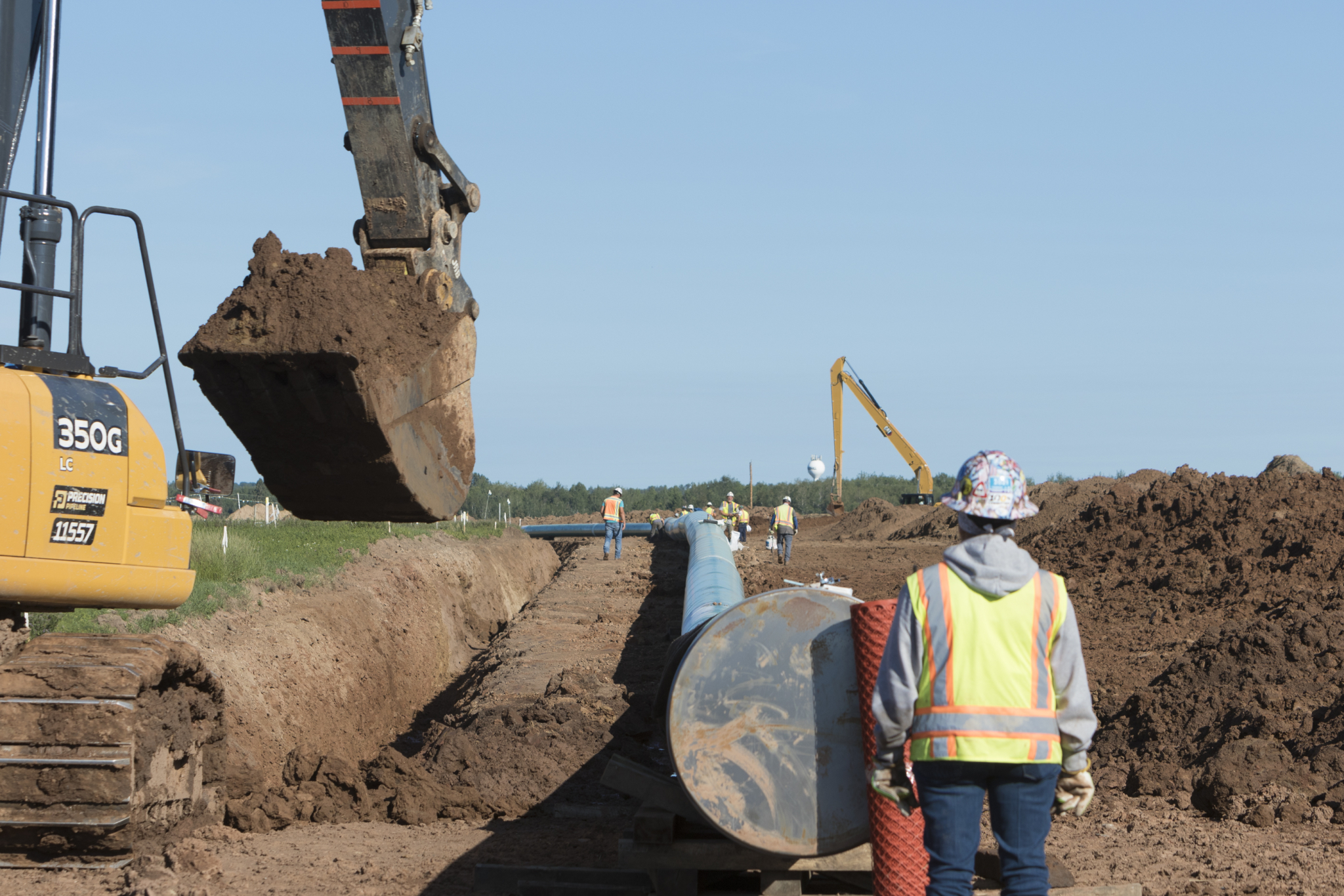 Workers installing a portion of the Line 3 pipeline. Photo via Enbridge
Next story

Canada’s largest banks have signed a new deal to pump $1.5 billion into Enbridge that will help the oil and gas company expand its pipeline network, with the vast majority of that money referred to as “sustainability linked” in the term sheets.

Of the $1.5 billion Enbridge is receiving, $1.1 billion is “sustainability linked,” which means the interest rate changes over time based on whether the company meets its environmental, social, and corporate governance (ESG) goals. These goals include reducing greenhouse gas emission intensity 35 per cent by 2030 compared to its 2018 emissions, and targets to increase racial diversity among its staff and the number of women on its board of directors.

The other $400 million is not linked to these efforts and comes with different terms.

The groups behind the financing are the investment arms of RBC, BMO, TD, CIBC, Scotiabank, National Bank of Canada, Dejardins, HSBC, and ATB Financial, as well as Merrill Lynch Canada, a subsidiary of Bank of America. The exact breakdown of how much money each contributed is not known.

Calgary-based Enbridge says its “sustainable finance strategy,” of which this is a part, plays a key role in its effort to meet its ESG goals because it connects financing costs to ESG disclosures.

“We also have committed to net-zero emissions by 2050, and annual performance towards that and all our ESG goals have been linked to executive and employee compensation,” said spokesperson Tracy Larsson in an email.

Still, the terms of the recent financing make clear Enbridge plans to use the money to pay off debt, and for capital expenses like pipelines.

“The (corporation) does not intend to allocate the net proceeds specifically to projects or business activities meeting environmental or sustainability criteria,” Enbridge says in the risk factor section of the terms in its sustainability-linked financing agreement.

“Money coming into the company, even at the corporate level, is going to go into big capital expenditures, and in this case, it would be all the pipelines that Enbridge is expanding,” he said.

Canada’s largest banks are pumping $1.5 billion into #Enbridge that will help the oil and gas company expand its pipeline network, with the vast majority of that money referred to as “sustainability linked” in the term sheets. #cdnpoli

Enbridge is behind the controversial Line 3 pipeline that climate and Indigenous rights activists have been protesting. Line 3, which stretches from Edmonton to a terminal in Wisconsin, was first built in the 1960s, and Enbridge is now expanding its capacity, thereby locking in oilsands infrastructure.

From May 2020 to April 2021, Enbridge put more than US$500,000 into a fund called the Public Safety Escrow Trust Account that pays for policing expenses related to Line 3, reports the Minnesota Reformer. VICE reports that amount has swollen to nearly $2 million as of late-August owing to the summer’s protests.

“Enbridge does not direct any police response. Community police and sheriff deputies are responsible for public safety,” said Larsson.

Because the financing can be used for general corporate purposes, Brooks said Enbridge could use the money on policing.

“Paying for police is, unfortunately, part of (Enbridge’s) operations, and so in this day and age for a Canadian company to be paying for police to remove Indigenous land defenders from their land in this time of reconciliation I think is disgusting and offensive,” said Brooks.

Brooks also called Enbridge’s commitment to reduce emission intensity as part of its ESG goals a “slap in the face” because the goal only addresses the emissions the company is directly responsible for, without including the emissions created when the fossil fuels are ultimately burned.

The problem is “in the product they are going to be shipping, and facilitating the expanded use of, which in the case of Line 3 is tarsands oil,” he said. “They're building out infrastructure whose lifespan is decades, (and) once we build, we're basically locking in their usage for many years to come.”

Tara Houska with the Giniw Collective, an Indigenous-led organization leading the protests against Line 3, called it greenwashing to say the bank loans are linked to sustainability.

“I don't think there's any way you can try to paint a tarsands company as sustainable,” she said. “The product they're pulling out of the earth is one of the most carbon-intensive processes to create oil in the entire world.”

Houska said in her experience campaigning against North American and European banks, Canada’s stand out for being resistant to change.

“Canada has been one of those places where, because the industry is so deeply entrenched with the government and with the financial sector, it’s been really difficult to gain any traction,” she said.

“But I hope Canadians pay attention to that and think about how their financial sector –– and that their banks –– are just as entrenched with the fossil fuel industry as their government is, which is outright buying pipelines these days.”

Since the Paris Agreement was signed, Canadian banks have given $694 billion to fossil fuel companies in loans, and have also invested $125 billion in them, according to a report from Amsterdam-headquartered research firm Profundo.

RBC was the largest funder, providing $164 billion worth of loans to fossil fuel companies. Next was Scotiabank at $157 billion, TD at $144 billion, BMO at $116 billion, CIBC at $100 billion, and the Desjardins Group at $13 billion.

When it comes to fossil fuel equity investments since Paris was signed, RBC was again at the top with $45 billion. Next was TD at $26 billion tied up in fossil fuels, BMO at $21 billion, Scotiabank at $17 billion, CIBC at $16 billion, and Desjardins Group at $1 billion.

If an individual really cares

If an individual really cares about what appears to be "Green washing" billions of dollars in loans to Enbridge then maybe it is time to move savings to Credit unions? .... or are they also involved in such activities?

Time also for pension funds, universities, etc., to divest their holdings not only in carbon-producing industries, but also in carbon emissions enablers: banks, private equity funds, insurers.
Too bad we as individuals can't "divest our holdings" in government.
The whole show literally gives me a headache and makes me feel ill.
Too bad there's no regulation of banks' profits. And suppliers of essential goods (e.g., grocery store chains, who've profitted extraordinarily from Covid, partly through unjustified higher prices and staff layoffs). Not to mention their profit-taking and deduction-making collection of "donations" of goods from their store to the foodbanks which have seen skyrocketting need amongst those who can't afford to buy groceries, many of whom received no "Covid monies" at all.

Finally convince my financial advisor to dump Enbridge (and other fossil fuel/infarstructure stocks from my paltry portfolio. Re-invested in "green mutual fund. My only regret is how tiny my drop in the bucket is.