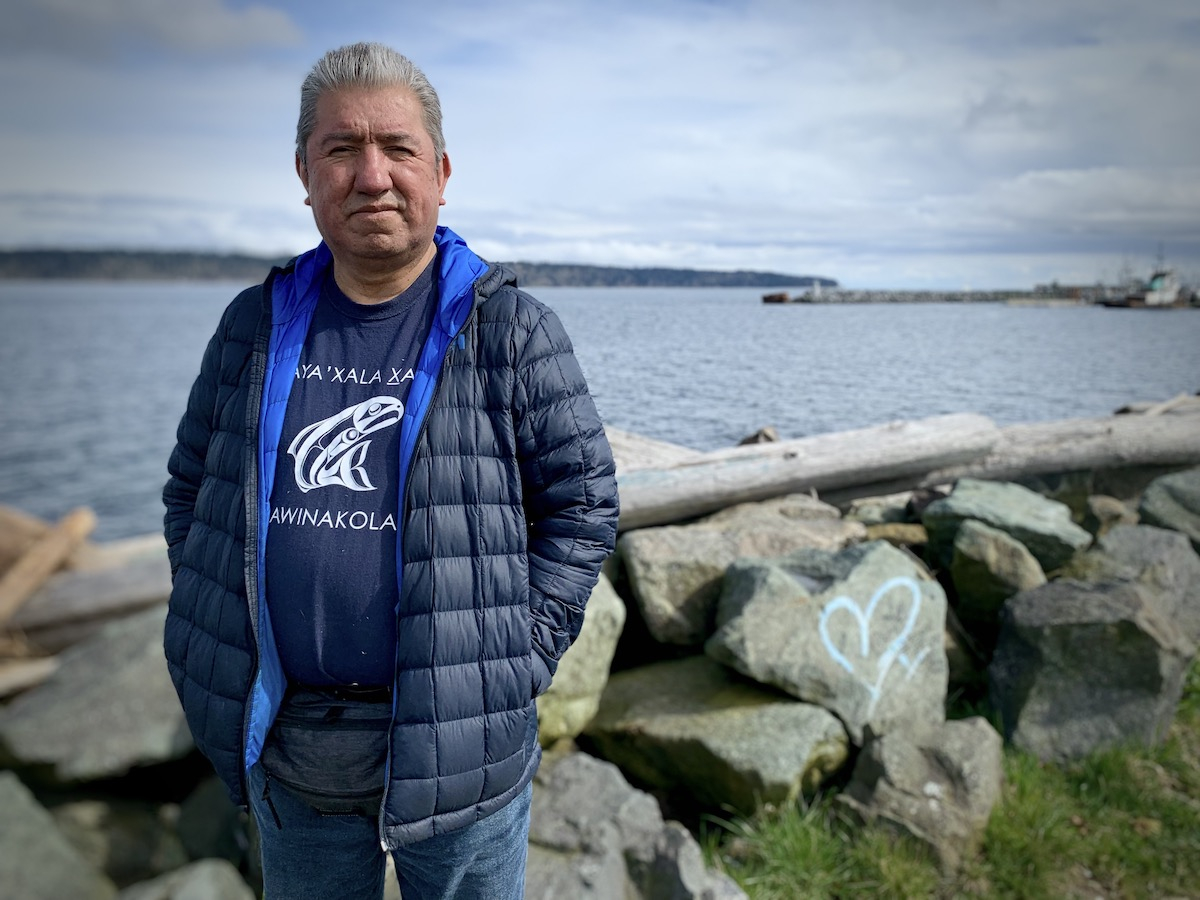 Warning: This story contains details that may provoke distress or trauma in some readers.

Homalco Chief Darren Blaney has the tragic distinction of being a third-generation residential school survivor.

Like his father, and grandfather before him, Blaney was forced from his home, family, and culture in the small community of Church House in Bute Inlet along B.C.’s remote central coast.

“My great-grandfather was the first one from Homalco to go to residential school in 1875,” said Blaney.

Blaney’s ancestor came home 12 years later, a victim to the cycle of violence, disconnection, and trauma associated with residential schools that would also ensnare his relatives and others of the Homalco Nation (named the “people of fast running waters” after the turbulent tides of their inlet).

“There’s been a lot of destruction from residential schools,” Blaney said. “My dad went, my brother went, and I went.”

When he sees archival photos of Indigenous children in dormitories packed with beds, Blaney recalls the isolation he felt in his early teens during his first year at Sechelt Residential School, and the next five years he spent even farther from home at St. Mary’s Residential School in Mission, B.C.

“In Sechelt, my bed ended up being by the windows. I remember looking out the window at night time and I could see the lights of Nanaimo across the water,” said Blaney.

But escape to the Vancouver Island city and possibly home was next to impossible because the only way out of Sechelt was by ferry, he said.

“It was just a lonely place.”

The Sechelt facility, also known as St. Augustine’s, was established in 1904, run by the Catholic Church, and funded by the federal government. Parents withdrew their children from the school in 1923 to protest the poor education, harsh discipline, and inadequate diet. Although funding at the school did increase, the facility did not ultimately close until 1975.

Blaney thinks the first National Day for Truth and Reconciliation today is a good opportunity to educate Canadians about the harms and pain residential schools caused Indigenous children and communities.

But it was confirmation of 215 children buried at a gravesite at a former residential school in Kamloops, B.C., in May that sparked a wider consciousness in Canadians about the issue, Blaney said.

There’s a better understanding of what happened, he said, adding residential schools didn’t only expose children to violence, sexual abuse, malnutrition, and disease, but set out to destroy Indigenous culture and identity.

“Before (Kamloops) … nobody took the genocide seriously,” Blaney said.

But, the new national day of commemoration and findings by the Tk’emlúps te Secwépemc band, followed by subsequent burial sites confirmed by other First Nations, are only an initial step toward reconciliation, he added.

“I take a look at all these investments with the orange flags. Those are fine and bring educational attention to residential schools, but it’s action that’s needed. Nobody in government is dealing with the trauma.”

First Nations governments don’t have and are denied the resources they need to establish long-term treatment and healing for members in their communities, he said.

Indigenous groups are always scrabbling to generate revenue, not solely for the sake of economic development, but to help their communities overcome the legacy of the schools, Blaney said.

“Our economic development will only go as far as our healing,” he said.

“As much as we'd like to move forward, the instruments of residential schools are still tying us down.”

First Nations leadership is left to struggle to rebuild governance and capacity with little support from governments that have long monopolized the wealth of Indigenous people, he said.

“Resources in our territory have been stripped,” Blaney said, citing forestry as an example, an industry where even now, the province is only offering up a slightly bigger piece of a very small and diminishing pie.

“All our opportunities for revenues are gone and poverty is a weapon for the government,” he said.

“First Nations trying to defend their rights in court are easier to defeat if they don't have money.”

Regardless, Indigenous people are overcoming obstacles to provide better lives for their communities, he said.

The Homalco have invested in a number of tourism ventures and a radio station to build capacity and employment.

Funds from the non-profit station will go into cultural programming and healing for the community, especially to ensure youth don’t become intergenerational victims, Blaney said.

“The shadow of residential schools gets longer and longer, and the potential of our people is lost in alcohol and drugs from trauma,” he said.

“But we’re working to shield people and give them a better chance,” Blaney added.

“Everybody wants to be useful, happy and whole.”

The National Indian Residential School Crisis Line provides 24-hour support to former students and those affected by trauma at 1-866-925-4419.