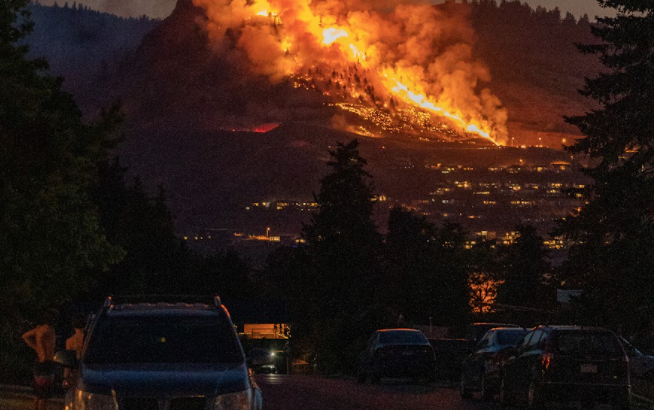 A wildfire rages in Coldstream, B.C., on July 9, 2021. Photo courtesy of @ItsGavP
Previous story
Next story

For Gordon Murray, the loss of his home during this summer’s wildfire in Lytton shows the British Columbia government isn’t doing enough to curb the climate crisis.

“I still taste smoke from the firestorm that erased our house and 90 per cent of Lytton as we fled that unexpected and unstoppable manifestation of the human-caused climate emergency,” said Murray.

“Political leaders need to confront this as an existential crisis, not a PR crisis — the time for non-binding goals and aspirational incentives is passed. We as a society need to mobilize at least on the scale of our COVID response to fight this unseen enemy, and the enemy is us.”

He joins many others in calling for the B.C. government to revitalize its climate plan, CleanBC, which was introduced in 2018. Around 200 organizations put out an open letter Tuesday saying the plan needs serious revisions, and outlining 10 “bold emergency actions” they want John Horgan’s government to take now.

Titled, “An Urgent Call to the BC Government to Confront the Climate Emergency,” the letter’s signatories include the Union of BC Indian Chiefs, Stand.earth, the Canadian Association of Physicians for the Environment, and other faith, labour, youth, senior and community groups.

Grand Chief Stewart Phillip, president of the Union of BC Indian Chiefs, wrote a piece in The Tyee earlier this month explaining leaders who had previously endorsed the province’s plan no longer believed in its effectiveness to reduce emissions.

“Simply put, CleanBC does not sufficiently address the severity of the climate crisis,” said Phillip.

“The allowances for dirty emissions from the fossil fuel sector and forestry will increase the deadly and devastating impacts that communities across the province and the world are experiencing, and are not going to help us pay for a just transition to a clean economy. The (province) must fully accept that they need to come up with an alternative economy because we aren’t going to achieve a clean B.C. with dirty fossil fuels.”

The letter comes in advance of an update to CleanBC, expected to be released sometime before COP26 in November. Campaigns manager of Dogwood B.C., Alexandra Woodsworth, points to August’s Intergovernmental Panel on Climate Change report, which sounded the alarm bells for many by warning the world’s Paris target of limiting global temperature rise to 1.5 C is slipping out of reach, as an especially timely push to get B.C. on the right track.

She explains CleanBC allows for LNG development and falls short on plans to cut emissions — its goal is to reduce them 40 per cent from 2007 levels by 2030, but the signatories call for a 60 per cent reduction by 2030. Even with the current goal, Woodsworth says there isn’t an adequate plan to reach it.

“So, for me, this really comes down to the contradiction between a province that says it has a strong climate plan, and a province that is doubling down on expanding fossil fuel industry in B.C., and doing so with billions of dollars of public money,” she said, referencing the province’s $1.3 billion in subsidies to the oil and gas industry in 2020.

Stopping any new oil and gas projects, and phasing out any existing fossil-fuel endeavours, is one of the calls to action put forward in the piece, which also requests action on a just transition, improved action on food security, and a pathway to net-zero buildings.

The provincial government is set to review its fossil fuel subsidies (an election promise the province says it will start undertaking in “the coming weeks”), which have doubled since Horgan’s NDP took power, according to a yearly analysis released by Stand.earth.

Woodsworth said how the government approaches this review will be an important window into how seriously it takes the climate crisis.

The provincial government spent $1.3 billion on fossil fuel subsidies between 2020 and 2021, and that needs to be cut back significantly, Woodsworth said.

“I think that is a really important and concrete opportunity where they could hit a bunch of these targets,” she said.

“They could show that they're serious about the climate emergency if they listen to what the B.C. public is telling them and really wind down royalties and fossil fuel subsidies through this review.”

Why hasn't this story been on

Why hasn't this story been on mainstream news?! You would think at least our public broadcaster the CBC would cover it. Thanks to the National Observer for this.

"Grand Chief Stewart Phillip, president of the Union of BC Indian Chiefs, wrote a piece in The Tyee earlier this month explaining leaders who had previously endorsed the province’s plan no longer believed in its effectiveness to reduce emissions.
"... [Campaigns manager of Dogwood B.C., Alexandra Woodsworth] explains CleanBC allows for LNG development..."

Why would anyone endorse a climate plan that permits massive LNG development?
A head-scratcher, for sure.