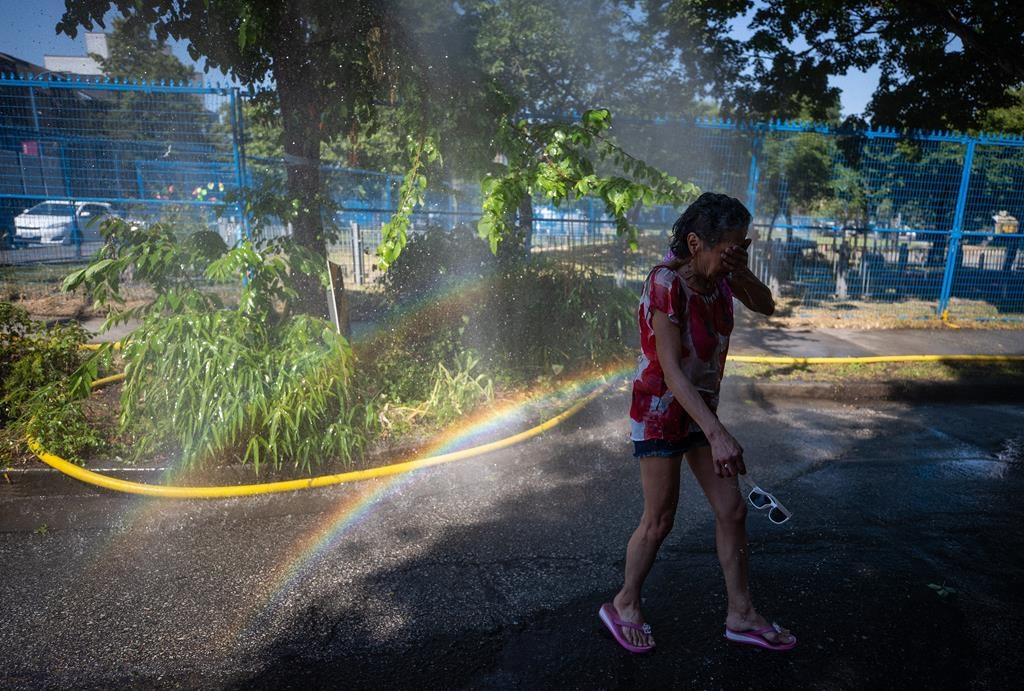 Pinky, who asked to be identified only by her first name, wipes her face after cooling off in the water at a temporary misting station in the Downtown Eastside of Vancouver on June 28, 2021. File photo by The Canadian Press/Darryl Dyck
Previous story
Next story

The British Columbia government's inadequate support during an extreme heat wave this summer "compounded risks" for people with disabilities and those who are older, says an independent international human rights group.

Human Rights Watch says in a report released Tuesday that while those two groups are at greater risk of heat stress, many were left to cope with the dangers of record-high temperatures on their own.

Data released by the BC Coroners Service and the province on July 30 reported 569 "heat-related deaths" in the province from June 20 to July 29. Most of the the fatalities were people 70 years and older.

The report says Canadian governments and authorities must listen to and provide better supports to those with disabilities and older people before the next heat event.

"British Columbia does not have a heat action plan, and lack of access to cooling and targeted support for at-risk populations contributed to unnecessary suffering and possibly deaths," says the report, "Canada: Disastrous Impact of Extreme Heat."

Researchers examined the days from June 25 to July 1 for the report when B.C. "experienced a heat dome, a high pressure weather system that traps heat, with record temperatures of 49.6 Celsius."

The Opposition Liberals and Greens were highly critical of the New Democrat government's response to the heat wave Tuesday in the legislature, pointing to earlier government reports that warned about the risks of heat events.

"He said, and I quote: 'Fatalities are a part of life and there's a level of personal responsibility,' end quote," said Bond in the legislature. "Today, can the premier explain his government's failure to respond effectively to the deadliest weather situation in Canadian history?"

Horgan was not in the legislature during question period, but Health Minister Adrian Dix said the government was faced with a once-in-one-thousand-years weather event, but now that it's happened the government must learn lessons.

"It's no longer one-in-a-thousand years and it requires action to deal with resiliency and to support people," said Dix. "Everyone in this house is gutted by the fact people that we know in our community passed away that weekend. Gutted by it."

The minister acknowledged the people affected by the heat wave were the most vulnerable.

"All of these actions make us more resilient but we need to do more," he said.