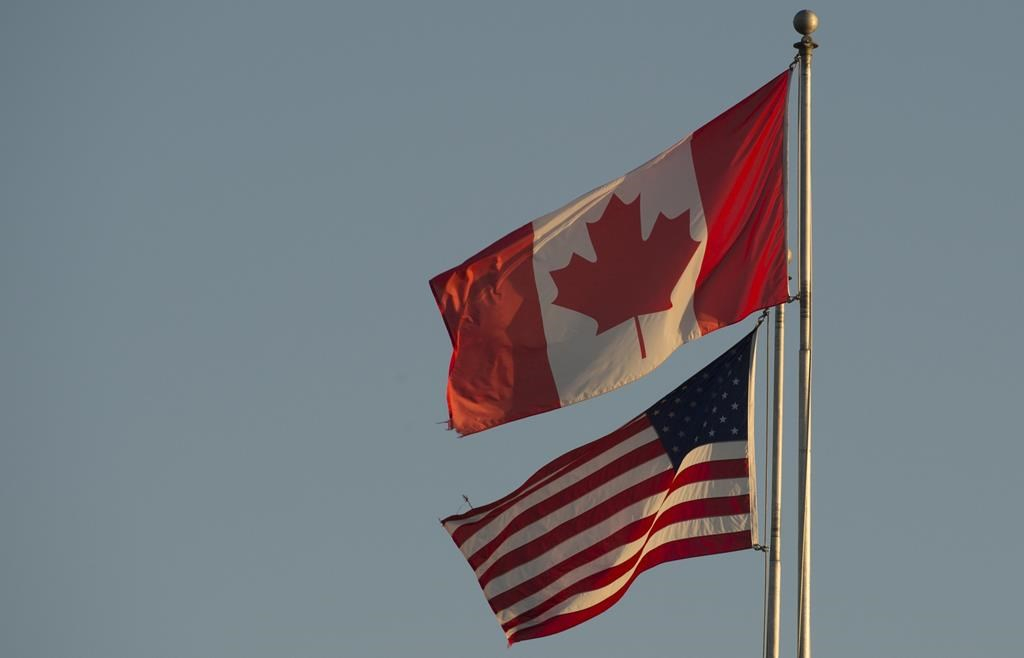 The Canadian and American flags are seen on top of the Peace Arch is at the Canada/USA border in Surrey, B.C. on March 20, 2020. File photo by The Canadian Press
Previous story
Next story

Canada still can't afford to take any chances when it comes to COVID-19, Deputy Prime Minister Chrystia Freeland said Thursday — and that includes requiring travellers to show a negative test result before entering the country.

Freeland happened to be in Washington this week for multilateral meetings with her fellow G7 and G20 finance ministers, as well as officials from the World Bank and International Monetary Fund.

Her visit overlapped with the news from U.S. President Joe Biden's administration that fully vaccinated Canadian travellers would be once again allowed to drive across the border early next month.

The Biden administration's rules don't include requiring a recent COVID-19 test — unlike Canada, which made the sophisticated $200 tests a cornerstone of its strategy for easing its own border restrictions earlier this year.

Critics of the restrictions say requiring Canadians to submit to a costly test every time they return from visiting the U.S. remains a significant and unnecessary hurdle.

But even in the face of evidence that the latest wave of COVID-19 is on the wane, Freeland said the benefits of the test requirement vastly outweigh the risks of doing away with it.

"I had my tests done to go home this afternoon," she told a news conference Thursday at the Canadian Embassy.

"When it comes to finishing the fight against COVID, the Canadian approach — which has been to follow science, to follow the recommendations of public health authorities, to err on the side of caution — has served us really, really well."

Canada has spent more than $280 billion on supporting businesses and supplementing incomes, she added — to say nothing of the personal sacrifices and tragedies Canadians themselves have had to endure over the last 19 months.

Canada can't do away with COVID-19 tests for travellers just yet, Freeland says. #CDNPoli #COVID19 #US

The euphoria that followed Tuesday's news that the U.S. would be easing its land-border restrictions quickly gave way to demands from business groups, tourism associations and ordinary travellers alike, all of them urging Ottawa to rethink the test requirement.

The U.S. Travel Association has estimated the Mexican and Canadian border closures have been costing American businesses $1.5 billion in travel exports — domestic spending by foreign visitors — every month.

Freeland wouldn't rule out the possibility that the requirement is eliminated at some point in the future, provided that such a decision has the blessing of public health officials.

"I am not making predictions about the future," she said.

The federal government has tried to be "thoughtful" and "flexible" when it comes to measures aimed at curbing the spread of the virus, Freeland added, always in consultation with health experts and with the rapidly changing circumstances of the pandemic in mind.

But "the rules are the rules," Freeland said, "and Canadians should expect to follow them."

South of the border, some of those rules are still unclear.

One key issue is whether the U.S. will consider travellers who received doses of two different vaccines — a group that includes upwards of four million Canadians, by most estimates — to be fully vaccinated for the purposes of entering the country.

The Centers for Disease Control and Prevention has already confirmed that vaccines approved by both the U.S. Food and Drug Administration and the World Health Organization are deemed acceptable.

Oxford-AstraZeneca, a WHO-approved vaccine that was deployed extensively in Canada, was never approved for use in the U.S. by the FDA.

The CDC is currently considering the question of mixed-dose vaccinations, armed with a new study — yet to be peer-reviewed — that suggests the mix-and-match strategy is effective for booster shots.

The agency, however, has advised from the outset against mixing vaccines for an initial two-dose regimen, a policy that directly contradicts the Canadian approach.

Researchers in Quebec and B.C. have found preliminary evidence that appears to vindicate Canada's strategy, which included mixing vaccine doses and spacing them out four months apart in hopes of stretching the available supply.