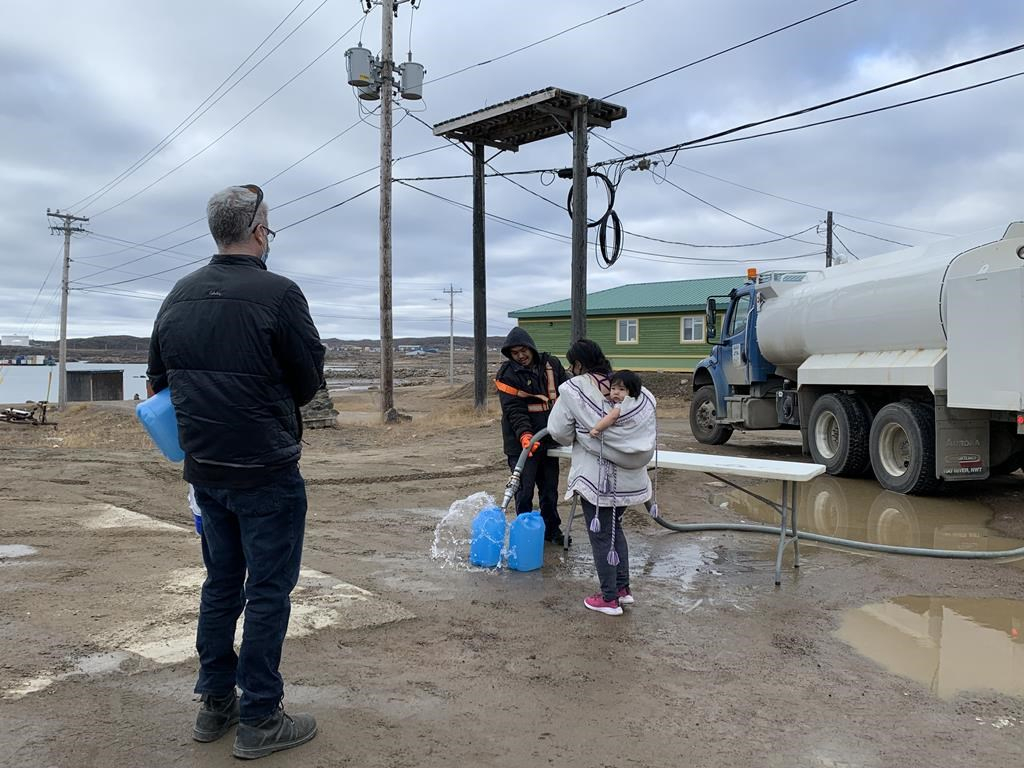 Residents line up to fill containers with potable water in Iqaluit, Nunavut on Thursday, Oct. 14, 2021. Photo by The Canadian Press/Emma Tranter
Previous story
Next story

The Nunavut government has declared a 14-day state of emergency in Iqaluit after water in the capital was deemed undrinkable and potentially tainted with petroleum.

The first shipment of potable water for residents also arrived by plane, with more expected to be delivered in the coming days.

The city has ordered 80,000 litres of water, and four-litre jugs were being handed out in the community of about 8,000 people.

She says the state of emergency doesn't indicate an increased risk to people, but it will help deploy additional resources to the city more quickly.

The state of emergency is to remain in effect until Oct. 27.

"We have been in constant communications with the City of Iqaluit, the Department of Health and the federal government and we are working together to ensure Iqalungmmiut have ongoing access to safe drinking water," Ehaloak said in a statement Thursday.

The city told residents Tuesday not to drink the tap water as a fuel smell was detected at the water treatment plant. It later declared a local state of emergency.

Water samples from Iqaluit were sent to a lab in Southern Canada for testing and are expected back in the coming days.

The city said residents will be given a maximum of four reusable jugs per household and urged people to keep them for future use.

Agnico Eagle, which operates several mines in the territory, also said it was sending 15,000 litres of water to Iqaluit on a cargo flight that is to land Friday.

Meanwhile, some residents have been collecting water at Iqaluit's Sylvia Grinnell River. Volunteers are also getting and delivering water for neighbours, elders and those without vehicles.

A University of Saskatchewan professor who has worked in Iqaluit said any amount of fuel in drinking water is unsafe, but drinking it over the short term isn't necessarily dangerous.

Steven Siciliano, a microbiologist and toxicologist who has done research in the north, said the city did the right thing by telling its residents as soon as it found the smell.

Siciliano said Iqaluit's regular water testing looks for bacteria, not hydrocarbons, and noted the city shouldn't be blamed for the situation.

The human nose is "incredibly sensitive" to hydrocarbons, meaning people can smell it even if there's a very low amount, he said.

He said long-term exposure to compounds found in gasoline could be "very risky" but drinking it for a week or so probably isn't going to do much harm.

"It's not like if you have one cup of water, you're poisoned for the rest of your life," said Siciliano.

Despite that, Siciliano said the situation in Iqaluit is urgent and a solution needs to be found as soon as possible.

"If they drank it before they found there was fuel, I don't think they have grave cause for concern. Going forward, is it OK? Absolutely not."

As a comparison, he said, smoking one or two cigarettes a day won't give a person cancer but smoking a pack a day likely will.

"It's kind of like that with the water. Drinking it every day for a week? Not going to give you cancer," he said.

"We don't know how much fuel there is. They may not be fuel in there — that's the good news."

One temporary solution, Sicilano said, could be to install "air strippers" in the water, which would move air through contaminated water and remove chemicals.

"If you can push a lot of water through it, you can strip it of those volatile contaminants," he said.