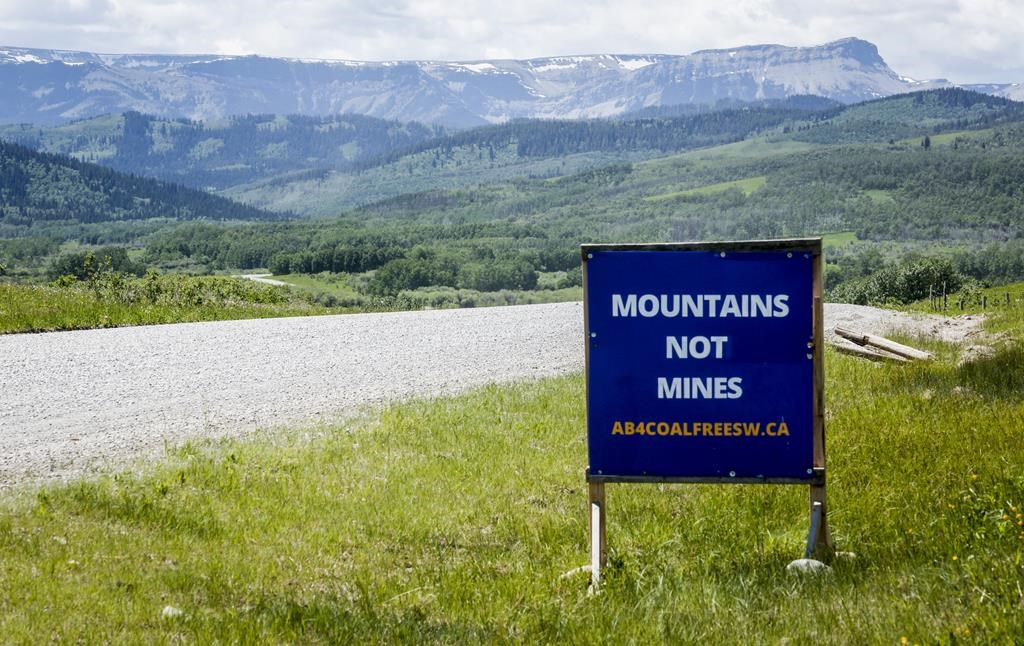 A sign opposing coal development in the eastern slopes of the Livingston range southwest of Longview, Alta., on Wednesday, June 16, 2021. File photo by The Canadian Press/Jeff McIntosh
Previous story
Next story

A report detailing how Albertans feel about open-pit coal mining in the Rockies will be delayed by a month, says the head of the committee preparing the document.

Ron Wallace said the report, the first of two his panel is expected to generate, will now be delivered to Energy Minister Sonya Savage by Nov. 15. That's the same due date as the second report, which is to contain recommendations on coal development.

"It was because of the overwhelming response and the need to accommodate that response with extra time that we had to approach the minister with the request for an extension," Wallace said in an interview Tuesday.

"To ensure we are able to devote the necessary attention to the input received, the committee was granted permission from the Minister of Energy to extend the deadline of the engagement report to match the deadline of our final report," the post said.

The extension comes as American researchers conclude that North America now has so many steelmaking coal proposals in the works that some mines may not meet profit forecasts, raising the danger they might be closed early.

"They're promising lots of job creation," said Ryan Driskell Tate of Global Energy Monitor, a U.S.-based research group. "There are lots of promises made early on that are not necessarily fulfilled."

Wallace's five-member panel has been canvassing the province for what people think about how — or if — coal development should proceed. It was established as a result of a massive public outcry at changes that removed protections for large swaths of the Rocky Mountains and their foothills that resulted in a flood of coal exploration permits being issued on some of Alberta's most cherished landscapes.

The panel was due Friday to deliver a summary of what it heard in a report to the minister. But Wallace said it received too much high-quality information to pull anything together before mid-November.

With submissions still trickling in, Wallace said the panel has received 177 detailed papers from environmental groups, coal companies, municipalities and First Nations. It held 67 meetings and took in 1,028 emails.

Most, he said, were "strongly opposed" to the industry's expansion.

"I would characterize the report as a reflection of an enormous pent-up demand for the public to speak to government," he said.

Meanwhile, Tate said a spike in coal prices has led to 15 steelmaking coal projects across North America that have advanced beyond initial exploration, 11 of them in British Columbia and Alberta.

Tate said if all those projects are built, the amount of coal exported to China and other Asian countries would have to more than double.

"They don't have very obvious consumers," he said. "Prices are one question. I'm not even entirely sure they have a stable market."

Tate said the current price spike is due to a diplomatic spat between China, the world's biggest steelmaking coal consumer, and Australia, its biggest producer. If the differences are resolved and China starts buying Australian coal again, prices could drop, he said.

The outlook for Albertans is risky, Tate said.

"Albertans will be dependent on the net-zero (carbon) targets of other countries."

Worse, he said, is the risk of stranded assets — mines that have made their environmental impact but are shuttered by poor profitability before the promised economic benefits are realized.

"This is a volatile market that is undergoing a lot of changes," said Tate.

Provided with a copy of Tate's report, Alberta Energy spokeswoman Jennifer Henshaw said no decisions on coal will be made until after Wallace's panel delivers its recommendations.

"The report will provide valuable insight and guidance as we determine the next steps to ensure modern coal policy is developed," she said.

The Coal Association of Canada did not respond to a request for comment on the Global Energy Monitor study.