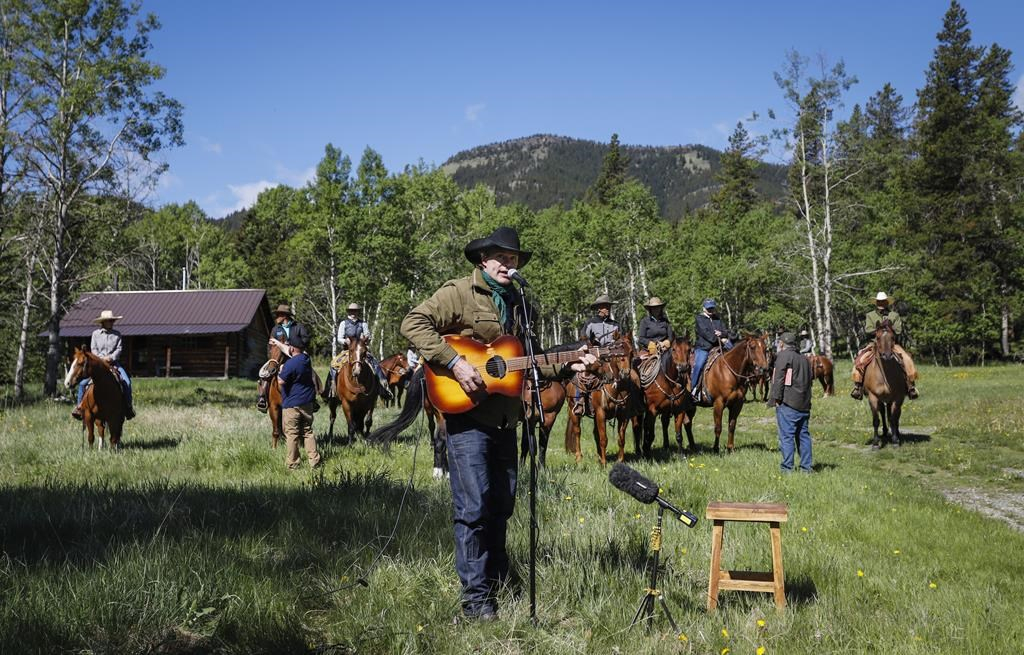 Country music star Corb Lund, centre, sings on land near proposed coal mine development on the eastern slopes of the Rocky Mountains southwest of Longview, Alta., on Wednesday, June 16, 2021. Photo by The Canadian Press/Jeff McIntosh
Previous story
Next story

Two mountain goats stubbornly refused to get up from their resting spot Wednesday in the middle of a gravel road heading into the eastern slopes of Alberta's Rocky Mountains.

Like the two goats, many rural landowners in the region aren't budging from their opposition to the province's plan to allow open-pit coal mines.

About 30 landowners wearing cowboy hats, boots and on horseback rode onto a private property for what was billed as a "Tribute to the Mountains Concert" with musicians, including country star Corb Lund.

Lund, a sixth-generation southern Albertan, has been an outspoken opponent of the Alberta government's plan to allow open-pit coal mines in the region and the concert took on more of the feel of a rally.

"We're a couple of hours south of here in the foothills, but it's the same story ... many generations on the land," he said.

"I don't speak out publicly about a lot of issues, but this is so big and so egregious that I just didn't think it could be left alone."

Lund turned and pointed to a flat mountaintop behind him.

"That ridge up there is called Cabin Ridge and that's where the coal mine's going to be if it goes through. They're going to take that top off the whole ridge and probably ruin these rivers. This whole area will be a disaster," he said.

Lund choked back tears as he recalled the emotion he feels every time he drives home after being on tour.

"Everything changes for me and it gets real magical," he said.

"This is sacred country and that's why I'm doing it ... I don't like doing it, but the government and the coal companies have forced me to."

Peggy Lund, who still lives on the family ranch, shares her son's concerns about the proposed mines.

"I just think what's proposed and what's going on here is just a decimation and just a horrible thing," she said. "This will make a huge footprint, a negative footprint on the area. It comes with a lot of baggage."

Mac Blades's family has owned the property where the Wednesday event was held for 100 years. He remains hopeful that public pressure will put an end to any plan of coal mines on the eastern slopes.

Blades said it's already painful imagining how the view would change.

"I don't think I could come back and look at it. It would be devastating. I can't imagine it really. It would just destroy everything."

Coal mining in Alberta's foothills and mountains has been controversial ever since the United Conservative government revoked a policy in May 2020 that had protected the land since 1976.

Tens of thousands of hectares have been leased for exploration, drawing protests from First Nations, municipalities and many thousands of Albertans.

That outcry caused the government to restore the policy, pause new sales and suspend exploration work on the most sensitive land — although work continues elsewhere.

It also struck a panel to gather input on how Albertans feel about coal mining in the postcard-perfect landscape. It is expected to report in November.

The federal government on Wednesday announced it will step in to do an environmental review of any new coal project that could possibly release the contaminant selenium. The decision will affect any proposals that emerge from eight steelmaking coal exploration projects in the foothills.

Lund had been waiting for the announcement.

"It sounds like excellent news. It feels like the tide's turning a little bit, which is good because it's been a battle," he said.

"If it makes it harder and more stringent for the mines to get started ... that's a great thing."