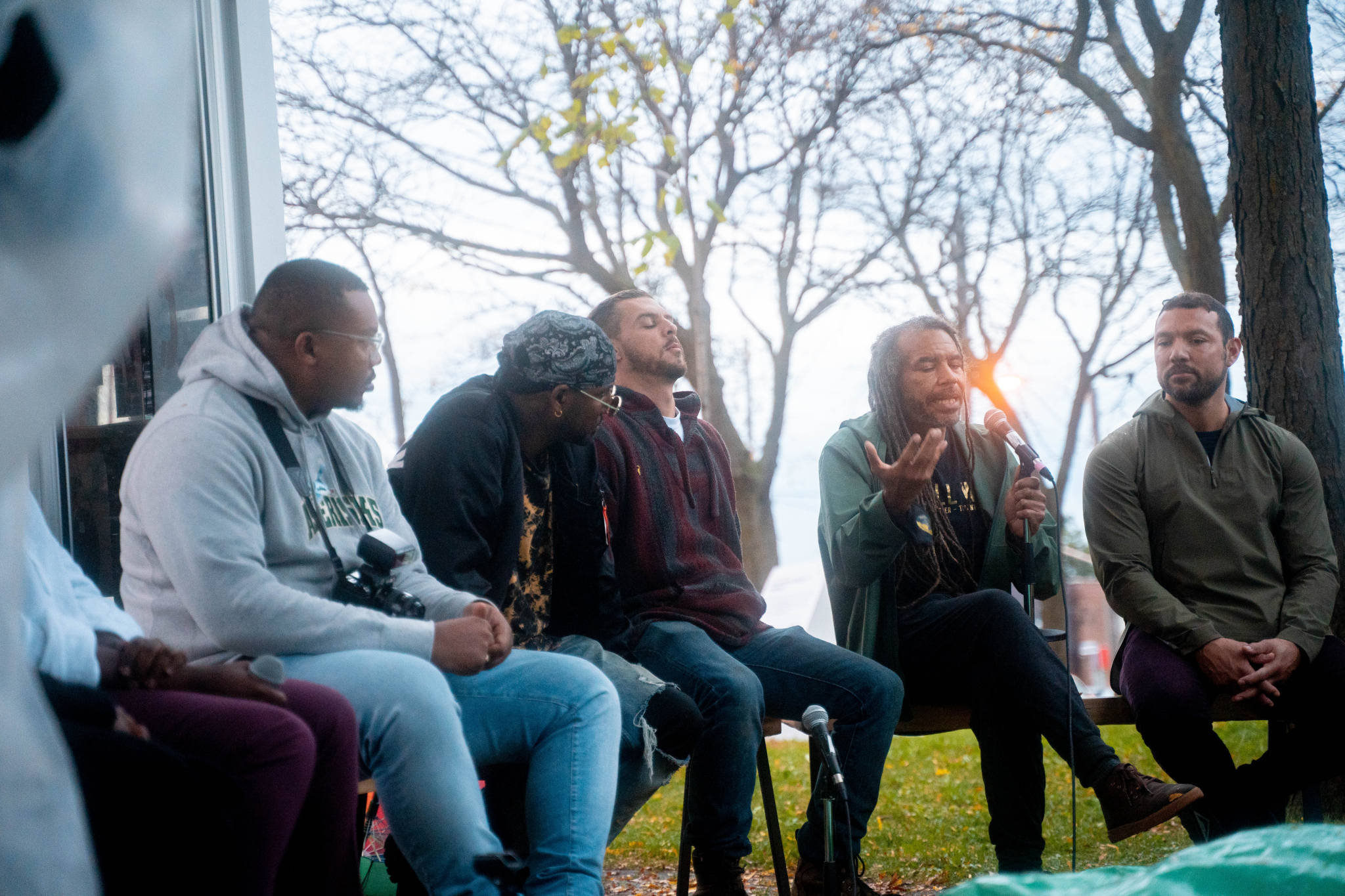 Julien Diego (second from right), creative lead of the My Public Living Room project, speaks at one of its installations. Photo by Jahmal Nugent
Previous story
Next story

In a tiny north Toronto parkette on a crosstown road constantly under construction, drivers might miss the telephone booth newly perched in the middle of four park benches.

Those from the neighbourhood who pass through will likely notice something different this month, though, and if they stop and step inside, they will find the portraiture of Lokey Shots, the 29-year-old photographer otherwise known as Logan Marrast, of some of those from the area who helped raise him.

“I got to capture some of the staples in this Dufferin-Eglinton community, Little Jamaica, just stemming on the idea of mental health and the stigma of that, and more so, just inviting especially young Black and brown men (to) the idea that mental health is real and we care for it,” said the co-creator of the Lokey Care Booth, the repurposed public phone booth set up here from Oct. 15 to 29 as one of the two installations of My Public Living Room.

“I want somebody to come into this booth, be surrounded by pictures that were generated out of love, not be ashamed about that,” said Julien Diego, the creative lead of the project, who created the mental health checkpoint and lit it after dark to be visible from the outside as well.

“It's a gallery for one. The beauty of the telephone booth is that you go in there by yourself, and you have this kind of moment, ideally, where you can just reflect on these spaces and access these resources and think about these thoughts,” said Diego, who is also co-founder of the Good Guise, which has supporting materials available via QR code inside the booth.

They are a collective of racialized men that has since 2017 worked on projects that another member, Moboluwajidide Joseph (who goes by Bo) described as providing “radical loving alternatives to shame, patriarchy, and toxic masculinity.”

They’ve been meeting monthly since the start of the year to create a Care Guide, a PDF document accessible via QR code found inside the booth with pictures, words, and poetry that explain how others might create such care pods in their own life.

The thoughts Diego, Bo, and Lokey want to encourage are about care primarily, and also creativity, economic sustainability, and accountability, the last one particularly complicated.

The latest installations from "Making With Place" create gathering spaces for young racialized men to discuss how to better give and receive care.

“Now for racialized men in this city, that's very fraught because we live in an environment in which we are hyper-criminalized, in which we're perceived as threats,” said Diego. “We’re overcharged, over-sentenced, overmedicated, over-consequenced, over-suspended. So every way that the system or the state measures accountability, it's actually used as a tool against us, and yet we also have to be accountable.

Diego said Lokey did a beautiful job of showing the people who got him through hard times.

“Sometimes it comes from an institution, but more often than not, it’s going to come from the people in your life. But you have to know how to ask, and you have to think to ask, and many of us are not practised in doing that,” Diego said.

Marrast describes one series of photographs of a retired police officer who came from Nigeria and when he started playing basketball in Grade 6, opened up a Friday night and Saturday basketball program at nearby Fairbank Middle School that he ran for 10 or 15 years.

“It was just a space for a lot of us to go to, just to share things with each other, to learn, to grow, to make mistakes and understand how to get better from these mistakes,” Marrast said. “And that space alone was just care, for me personally.”

Marrast wanted his photographs to disrupt an idea prevalent among young Black boys of the need to be tough and strong, that “you've got to hold it in, what's going on, figure it out on your own, and I want to just stop that idea,” he said. “It's OK to open up, it's okay to communicate about your problems.”

The project directs visitors to the Good Guise’s Care Guide, as well as to Across Boundaries, a mental health agency a few blocks from the site that works specifically with racialized men, women, and families; Lifted By Purpose, which works with racialized people experiencing mental health and/or incarcerated or dealing with the criminal justice system; and with SKETCH, the arts initiative that has put together the series “Making With Place” with grant funding as part of ArtworxTO: Toronto's Year of Public Art 2021–2022.