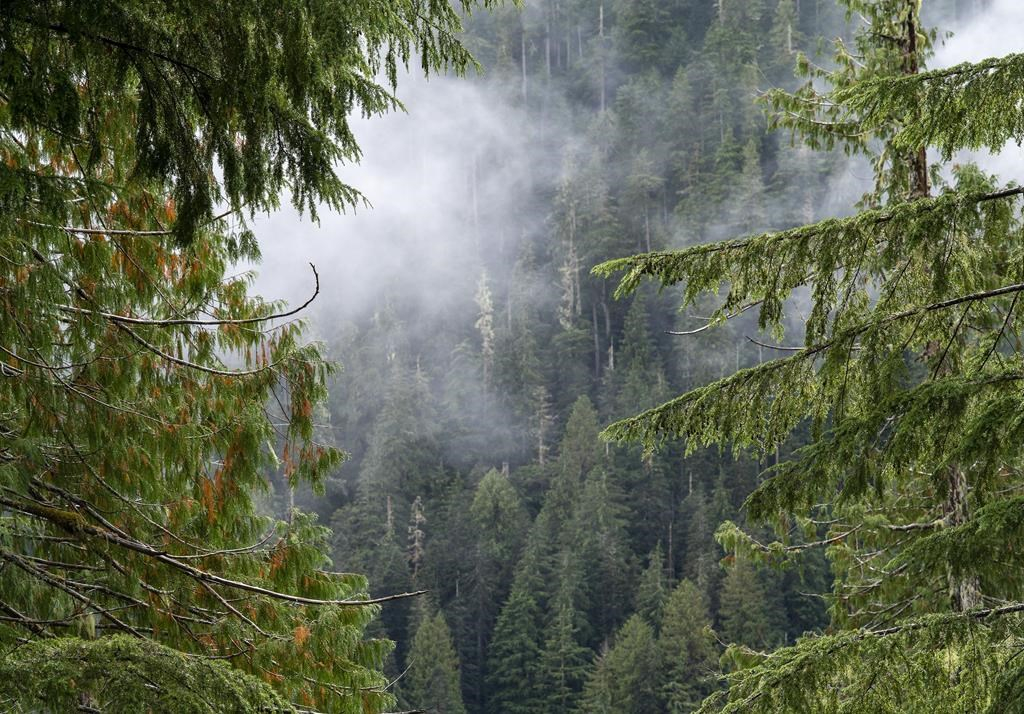 The clouds move among the old growth forest near Port Renfrew, B.C. on Tuesday, Oct. 5, 2021. File photo by The Canadian Press/Jonathan Hayward
Previous story
Next story

British Columbia's forests minister has introduced a bill to amend the Forest and Range Practices Act, saying it would "reshape" forest management in the province.

Katrine Conroy told the legislature on Wednesday the proposed changes align forestry legislation with the Declaration on the Rights of Indigenous Peoples Act passed in late 2019 and introduce "new tools to establish resilient forests."

"The vision is for a forest sector that delivers higher value from our forests, with secure, long-term jobs and healthier ecosystems," she later told a news conference.

Past policies "left too much control of the forest operations in the hands of the private sector" and limited the province's ability to fight climate change, protect old-growth forests and share benefits with Indigenous and local communities, she said.

"We'll put government back in the driver's seat of land-management decisions in partnership with First Nations, including where forest roads are built," Conroy said.

"The ability for the public and communities to view and have input on harvesting plans has been limited. It's time to increase transparency," she added.

A new forest landscape planning framework is expected to be implemented over time, fully replacing the current forest stewardship planning system, she said.

The new system of 10-year forest landscape plans developed in partnership with First Nations, local communities and other stakeholders will prioritize forest health, replacing the stewardship plans developed largely by the forest industry, she said.

With the proposed changes, companies with harvesting licences would be required to develop and submit their operational plans for the minister's approval, and they must meet the requirements of the broader landscape-level plans, Conroy said.

The landscape and operations plans would be posted publicly, she added.

The province has been working with the forest industry on the changes, which are expected to come into effect through regulation over the next year, Conroy said.

The B.C. Council of Forest Industries supports "modernizing and further strengthening forest policy to ensure we have a strong, sustainable, and competitive forest sector," president Susan Yurkovich said in a statement.

"This includes continuously enhancing frameworks for engagement and collaboration with Indigenous Peoples, communities, labour and industry."

John Betts, the executive director of the Western Forestry Contractor's Association, said in the government statement announcing the changes that the legislation will allow the province to better manage forest resources for both climate change and the cumulative effects of resource development.

"For our reforestation sector, it means we will be managing stands and implementing forest practices more sensitive to the complexities and dynamics of how our forest and range ecosystems connect over the landscape and time."

The province previously released a series of far-ranging forest "policy intentions," including diversifying the ownership of harvesting rights and establishing a framework for compensation in the event those rights are redistributed.

About half of B.C.'s forest tenures are held by five major companies, and the plan released in June included the goal to increase the tenures for Indigenous Peoples, local communities and smaller operators.

Conroy said the province has been working to implement recommendations from an independent review of B.C.'s old-growth forest management released last year, including the deferral of logging in ecosystems at risk of irreversible loss.

B.C. announced the temporary deferral of harvesting across 196,000 hectares of old-growth forests in nine different areas in fall 2020. In June, the government approved a request from three Vancouver Island First Nations to defer old-growth logging across about 2,000 hectares of the Fairy Creek and central Walbran areas.

The province is in talks with Indigenous rights and titleholders over old-growth management and additional deferrals are expected soon, Conroy said.

Further changes to the Forest Act are expected later, she added. That act, separate from the Forest and Range Practices Act, governs the annual allowable cut.