New movies: Dune made better, Wes Anderson’s ode to journalism, and what really happened at the Capitol 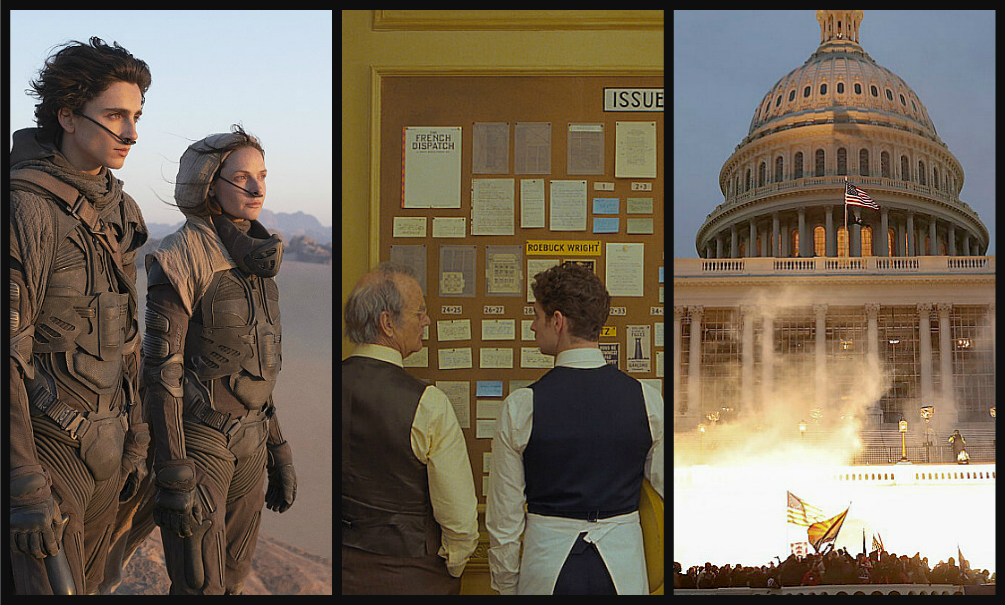 Also: The Old West revised in The Harder They Fall.
Previous story

Movie theatres are allowed back to full capacity starting Monday. For some time now, because of COVID, they've only been allowed to fill 50 per cent of the seats. It'll be interesting to see how the fans respond. In Toronto, where theatres were allowed back to 100 per cent last week, young people flocked in; older people didn't.

The big titles are the draw, of course: Bond last week, Dune and The French Dispatch now, Last Night in Soho next week.

If you're yearning for more indie films you might check out what the New Westminster Film Festival has to offer. It's on this weekend at the Landmark Theatre and there's information on this site.

And elsewhere, we have these ...

Four Hours at the Capitol: 5

The Harder They Fall: 3

DUNE: It looks great, it feels substantial and courageous, but still I felt less involved than I wanted. Denis Villeneuve was enchanted as a teenager by Frank Herbert's famous novel and dreamed of making a movie of it. Maybe too much, because he doesn't get all that enthusiasm out to us. The main story about conflict over resources and colonialism is introduced early but then stays in the background, and before it can get resolved, the movie ends. A character says, “This is not the end. It is only the beginning,” and we'll have to wait for another movie. This one only covers half the novel.

What we do get are grand desert vistas, eruptions churned up by sandworms, spaceships that at times create a Star Wars feel, but little of the lightness and action that suggests. Instead, we get deeply involved in a young man's spiritual journey (Timothée Chalamet, as the son of a noble having to adjust to life on another planet). That's a valid story, but takes up too much of the time and delays the others. And slows the narrative drive.

Oscar Isaac plays his father, who is told to gain control of the spice-mining projects on the planet of Arrakis. That puts him in battle with the Harkonnens (Stellan Skarsgård, plays their leader), who once had control and brutalized the Indigenous people there. Very relevant themes to us on Earth. Too bad they're unfinished, even though the movie is over 2½ hours long. (That's two minutes longer than David Lynch's version from 1984, which did cover it all, but has many detractors.) The new cast is terrific, though, including these names: Rebecca Ferguson, Zendaya, Jason Momoa (one of the highlights), Josh Brolin, Javier Bardem, and Charlotte Rampling. Best see it on the big screen, IMAX if you can. (5th Avenue, Scotiabank, Marine Gateway, and suburban theatres everywhere.) 3½ out of 5

THE FRENCH DISPATCH: It's being called a love letter to journalism, and it got a standing ovation at Cannes. I see it as a typical Wes Anderson film: droll, ironic, and quirky. It has the same feel (and quite a few of the same actors) as The Grand Budapest Hotel and is as enjoyable to watch. But afterward, you do find yourself asking: What is it saying? Mostly it illustrates his love for the kind of long-form reporting in The New Yorker. He's a long-time reader and once tried to buy its archives. Its most famous editors and writers inspired the fictional characters in the film, as they report from France for a Kansas newspaper's Sunday supplement. That feels like a bit of a stretch in itself. Bill Murray is the editor, with advice something like this: “Write it as if you meant to say it that way.” We see three stories they tell in black and white.

Among the writers, Frances McDormand reports on student protests in Paris and ponders “journalistic neutrality” as she gets involved with one of the leaders (Timothée Chalamet). Jeffrey Wright's writer recalls in a TV interview how he covered the kidnapping of a police chief's son and found the story drifting into the subject of “police cooking.” (A typical Wes Anderson byway.) And even more tangled is a story by Tilda Swinton's character about “an artistic genius” (Benicio Del Toro) who is in prison for double-murder and paints nude portraits of a guard (Léa Seydoux). An art dealer (Adrien Brody) considers them abstract masterpieces. The film is stylish and even convincing, up to a point. The actors sell the idiosyncrasies, and the film sells the value of good reporting. (Park Theatre.) 3 ½ out of 5

FOUR HOURS AT THE CAPITOL: I've seen other film summaries of the day the mob swarmed up and into the U.S. Capitol Building, but this one is the best. It takes you right in there with them. You're at the fences when the “insurrectionists” (or as they say, “patriots”) overpower the few police officers; at the doors where they smash the windows and burst in; and then in the rotunda (where one smokes pot), streaming down the halls and into the Senate chamber. You're there because some of this footage was taken by the protesters themselves.

The Proud Boys led the way, while Donald Trump was speaking in a nearby park and members of Congress were meeting, totally unaware of what was coming. Chuck Schumer is one of several we see in new interviews, along with a few journalists, some of the actual invaders (“Guess what? Americans showed up”) (“Trump was anointed by God”), and several police officers, the first that I'm aware of to talk publicly. One remembers “sheer bedlam” and “they were trying to kill us.” One was being injured until he pleaded “I've got kids” and they backed off.

Several times we hear a story recalled and then see film of the actual incident. A young woman aide to Nancy Pelosi almost breaks down describing how terrified she was when somebody started banging on the door to a safe room she was taken to. Then, from out in the hall, we see the man pounding on that door. When the first window is smashed, we see it happening from both outside and inside. The editing is superb and powerfully conveys the tension and chaos that was building. “The mob is the weapon,” someone says. There's no narration and no judgment. Just powerful stories and footage assembled by HBO and the BBC. (Streaming on CRAVE.) 5 out of 5

THE HARDER THEY FALL: The westerns we used to watch missed something. You hardly ever saw a Black person, although it's known there were many in the Old West, the majority by some accounts. So here's the latest of the few films to correct that story. Almost all the characters are Black, and to underline that fact, they wander into an all-white town in one scene and get nothing but stares. It's an elaborate revenge tale, but this time it's Black versus Black. It's rousing, engrossing, and, with a high body count, very violent. There's also a fun mash-up of music styles, with R&B, rap, and reggae on the soundtrack. Jay-Z is one of the producers and the director is an English musician, Jeymes Samuel, who is also the brother of the singer Seal. No wonder there's so much variety.

It's cast with some of the top Black actors working today. Idris Elba is the best known. Regina King, Zazie Beetz, Delroy Lindo, LaKeith Stanfield, and others are strong, and Jonathan Majors is central. As a boy, he saw an intruder kill his mother and father. Now an adult, he's an outlaw named Nat Love (we find out why late in the film). When his enemy (Elba) is released from prison, he goes after him. Both have gangs that will meet in elaborate gun battles, there is a train hijacking, and posturing about who's the fastest draw and best shot. The women get to do just as much shooting as the men. The film is stylized with mobile cameras, odd angles, split screens, and the longest zoom shot I've ever seen ... down a long street right to a close-up on a face. It's modern and playful, vague at times about who's with who and why, but tough and vital. (International Village and suburban theatres now, Netflix soon.) 3 out of 5