Jim Carr is out of cabinet, ending Liberal's special envoy to Prairies 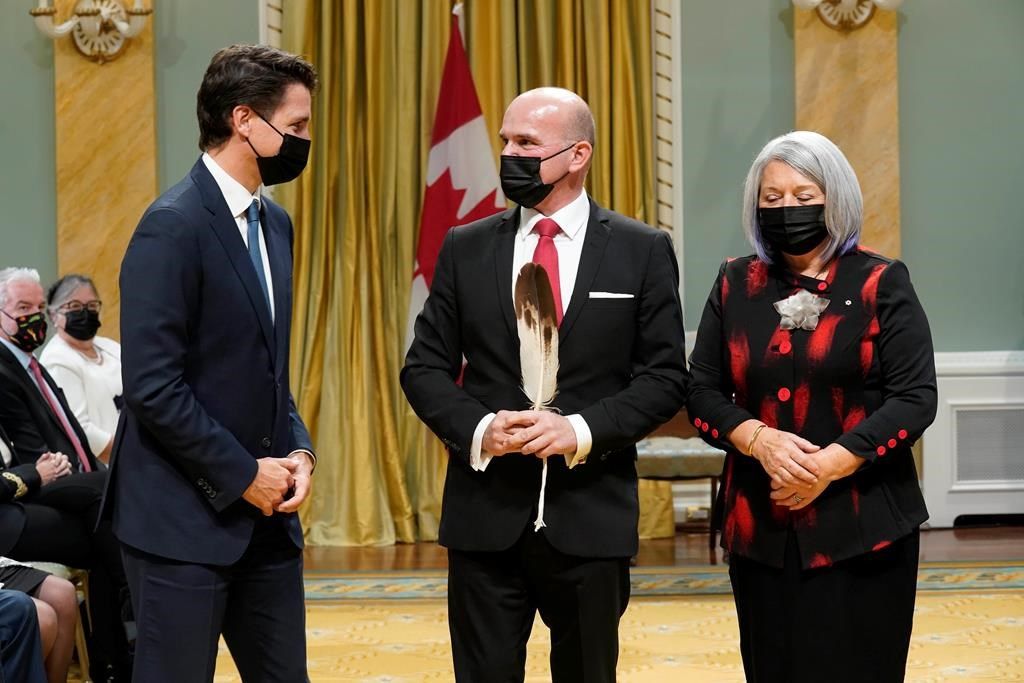 Prime Minister Justin Trudeau and G.G. Mary May Simon pose with Randy Boissonnault, minister of tourism and associate minister of finance, at a cabinet swearing-in ceremony at Rideau Hall in Ottawa, on Oct.26, 2021. Photo by The Canadian Press/Adrian Wyld
Previous story
Next story

Prime Minister Justin Trudeau cut his special representative for the Prairies from cabinet, signalling the Liberal government will take a different approach to its relationship with the West.

That appeared to get off to a rocky start on Tuesday, with the Alberta premier reacting strongly to another move by Trudeau — naming a former anti-pipeline activist as environment minister.

The result of the 2019 federal election prompted hand-wringing over national unity, as the Liberals were shut out of Alberta and Saskatchewan, where even longtime Regina cabinet minister Ralph Goodale went down to defeat. Those results came after months of pushback from conservative premiers in the Prairies over the Liberal government's energy policies.

That fall, Trudeau named Manitoba MP Jim Carr as his special representative to the region. Chrystia Freeland, who holds a Toronto riding but was born in Alberta, also became intergovernmental affairs minister at that time, tapped with responding to western alienation.

Last month, the Liberals elected two MPs in Alberta. Edmonton MP Randy Boissonnault was named minister for sport. Dan Vandal, who represents a Manitoba riding, kept his post as minister of northern affairs and is also assuming responsibility for economic development in the Prairies.

Carr's post, and his place in cabinet, was not renewed on Tuesday. He said on Twitter that he would be "continuing to promote the interests of Prairie Canada."

Another move that's raised eyebrows in the West is the appointment of Quebec environmentalist Steven Guilbeault to lead Environment and Climate Change. Before running for the Liberals, he founded Equiterre, a well-known environmental advocacy group, and was a known pipeline opponent who also worked Greenpeace.

On Tuesday, Conservative MP Blake Richards responded to the news on Twitter by calling Guilbeault an "anti-Alberta oil activist."

With this & appointing an anti-AB oil activist as environment minister Trudeau has made it clear he’s going to continue to vilify Canada’s energy sector instead of unleashing this industry during a critical time of economic recovery. Demand respect for AB https://t.co/GJfACGKZcb https://t.co/JNs7tHqyLt

#JimCarr out of cabinet, no more special envoy to #Prairies for Liberal government. #Cdnpoli

"Given Mr. Guilbeault's background, I think it's important for him to send a signal that he doesn't see the government of Canada as a special-interest group to impose a radical agenda that would lead to mass unemployment," said Kenney.

"I hope that he will send a signal that he is willing to work constructively and co-operatively with us as partners in reducing greenhouse gas emissions while growing the economy."

Guilbeault, in his role as an environmental activist, was also mentioned several times in Alberta's recently released final report of a public inquiry, struck in July 2019, to look into allegations that environmentalists were accepting foreign money to fund campaigns aimed at impeding expansion of Alberta’s oilsands, a major source of greenhouse gases. The report concluded Canadian environmental groups were exercising their democratic rights of free speech.

On Tuesday, Trudeau said the debate over whether climate change is real is over.

"There are some corners of the public sphere where you still see that debate, but for most Canadians and indeed most Albertans, we know that we need to look towards the future," he said at a news conference in Ottawa.

"We need to bring people along, support them in the jobs they need to have but also lower our emissions so we get to net zero."

Guilbeault takes over as environment minister at a time when many supporters of the oil and gas industry want to see more enthusiasm for it from Ottawa, not less, and are concerned about what a transition away from fossil fuel consumption means for the economy and jobs.

In taking on his new role, Guilbeault replaces Jonathan Wilkinson, a North Vancouver MP who hails from Saskatchewan and at one point worked for an NDP government in the province.

Kenney said that despite concerns around the Liberals' "ever more ambitious federal targets and prejudicial policies," he felt his government enjoyed a constructive working relationship with Wilkinson, who is moving to Natural Resources.

Wilkinson takes over natural resources from Seamus O'Regan, of Newfoundland and Labrador, who like Wilkinson was appointed to the role in 2019. Then, he touted how he also was from an oil-and-gas producing province.

On Tuesday, Vandal rejected any notion the cabinet is lacking more representation from his province, saying he's proud of the Liberals' four-person caucus in Manitoba.

— With files from Bob Weber in Edmonton.