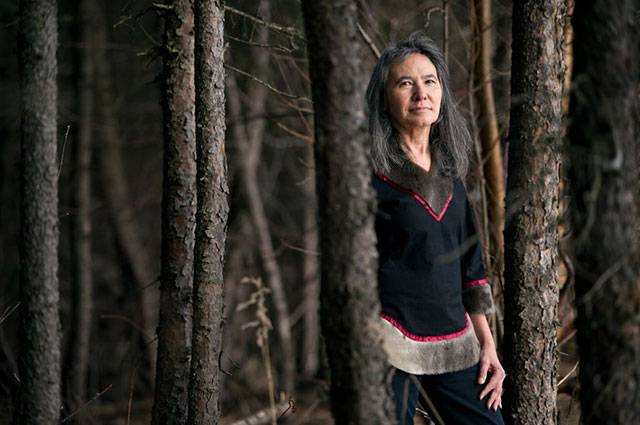 Dalee Sambo Dorough, who is the chair of the ICC, is headed to COP26. Photo by Marc Lester
Previous story
Next story

In the city of Anchorage, in the state of Alaska, Dalee Sambo Dorough sits in her book-lined office ready to travel more than 4,000 miles to Scotland to put forward a message she has been highlighting for decades.

Since the United Nations’ yearly climate change conference started in 1995, the Inuit Circumpolar Council (ICC) has attended to advocate for climate action from an Arctic perspective. Dorough, who is chair of the council, said that's why ahead of COP26 in Glasgow, the council has put forward a position paper where it calls on world leaders attending the conference to take action, noting they “take no satisfaction that we were among the first to sound the alarm bell as we observed our homelands beginning to change.”

The document goes further into detail, with more asks under each action, such as requesting leaders to contribute to a fund that Indigenous peoples can access, with a consideration that Inuit communities experience climate change similarly to non-G20 nations, and investment in Inuit-led renewable energy in the Arctic, while respecting Inuit sovereignty.

Dorough, who has chaired the ICC since 2018, has been involved in the non-governmental council in some form since its conception in the late 1970s. She said although COP26 comes at a unique time, in many ways, it feels like déjà vu.

Because the ICC is bringing a message it has stood by for decades — at COP15 in 2009, Inuit advocate Sheila Watt-Cloutier urged climate leaders to take the climate change already underway in the Arctic seriously, saying, “If we protect the Arctic, we protect the planet.”

Protecting means listening to Inuit people, those who know the land best, Dorough said. She harkens back to the words of ICC founder Eben Hopson, who noted over 40 years ago that Inuit have a deep and complex knowledge of the sea ice that no others have demonstrated.

Both those sentiments still ring true for Dorough, as does the need for more meaningful participation and inclusion of Inuit voices.

The ICC has put forward a paper, where they call on world leaders attending #COP26 to take action, noting they “take no satisfaction that we were among the first to sound the alarm bell as we observed our homelands beginning to change.” #Inuit

“Living with climate change has been our reality for many years. In mid-October, I was in my home community, Puvirnituq, in northern Quebec. There was no snow, no frost yet, not even ice forming. There are usually blizzards and plenty of snow and Inuit eagerly waiting to travel on the ice,” said Koperqualuk.

“The rest of the world is now experiencing what it means to live with climate change. This year, people were hit by floods in Europe and Asia, fires in Canada, Russia, and the United States, and droughts in Brazil and Madagascar.”

The conference — also known as COP, short for Conference of the Parties — has brought the world together since 1995 to hammer out agreements to reduce global warming. The talks gather policymakers, scientists, environmental activists, climate experts, and news media from the 197 member countries of the United Nations Framework Convention on Climate Change (UNFCCC) to set and work towards global climate change goals. This year, COP26 will take place at the Scottish Event Campus in Glasgow, Scotland, from Oct. 31 to Nov. 12.

The ICC, which represents around 180,000 Inuit from Alaska, Canada, Greenland, and Chukotka (Russia), has always been focused on climate, and the ways it impacts Inuit. In the Arctic, the total amount of sea ice has shrunk to less than half of what it was in the 1980s — it’s the area most deeply impacted by climate change, worldwide, and is warming at three times the rate of the rest of the world.

It means the safety of those who live in the Arctic is constantly under threat, as is Inuit way of life.

“Like all other species, we’re another species within the respective ecosystems of the Arctic environment and that profound relationship between our people and the environment ... it's become really an issue of how are we going to survive as a distinct people that have adapted to the cryosphere, that have adapted to the Arctic region,” said Dorough.

Although Dorough looks forward to the ICC side events, she remains disenchanted with the lack of inclusion of Indigenous peoples by the UNFCCC at climate conferences. The ICC was granted observer badges to COP26, which allows them to enter the official event space, but Dorough says only for three days out of the two-week conference.

Dorough said that doesn’t allow for enough time for Inuit to address their thoughts and stressed limiting the participation of Indigenous people is inherently inequitable.

The council is set to participate in the Local Communities and Indigenous Peoples Platform (LCIPP) Facilitative Working Group and the Arctic Council’s Conservation of Arctic Flora and Fauna (CAFF) Working Group, and Dorough wonders how their small time frame will allow them to impart what comes out of them.

“How are we supposed to advance the objectives and the mandate of the facilitated working groups in the area of knowledge? Of capacity building? And the opportunity to influence policy and policy development? If we're just confined to talk amongst (ourselves),” she said.

“If (that’s our) mandate ... and we're not then accredited to attend other meetings where policy capacity-building and knowledge are discussed, it's clearly a limitation.

When thinking of this year's COP and what note Dorough wants to focus on, she again references Eben Hopson's hopeful remarks from an ICC gathering in 1977 about how much valuable knowledge Inuit have on the climate.

"We're going to be the first response (to climate change), but we're also the first to be impacted," she said.

"... We have something to contribute to this issue, and we can assist in terms of the coherence and co-ordination ... through the knowledge that we have and what we can share. We just need the intellectual space in place to do it."

Can the leaders of Cop26

Can the leaders of Cop26 explain to the public why
"The ICC was granted observer badges to COP26, which allows them to enter the official event space, but Dorough says only for three days out of the two-week conference."
It is inconceivable that the people living in the Arctic should be left out of full access, consultation and recommendation status - when "politicians" with knowledge of politics - have full access and power to recommend. What is the point of this charade Cop 26?