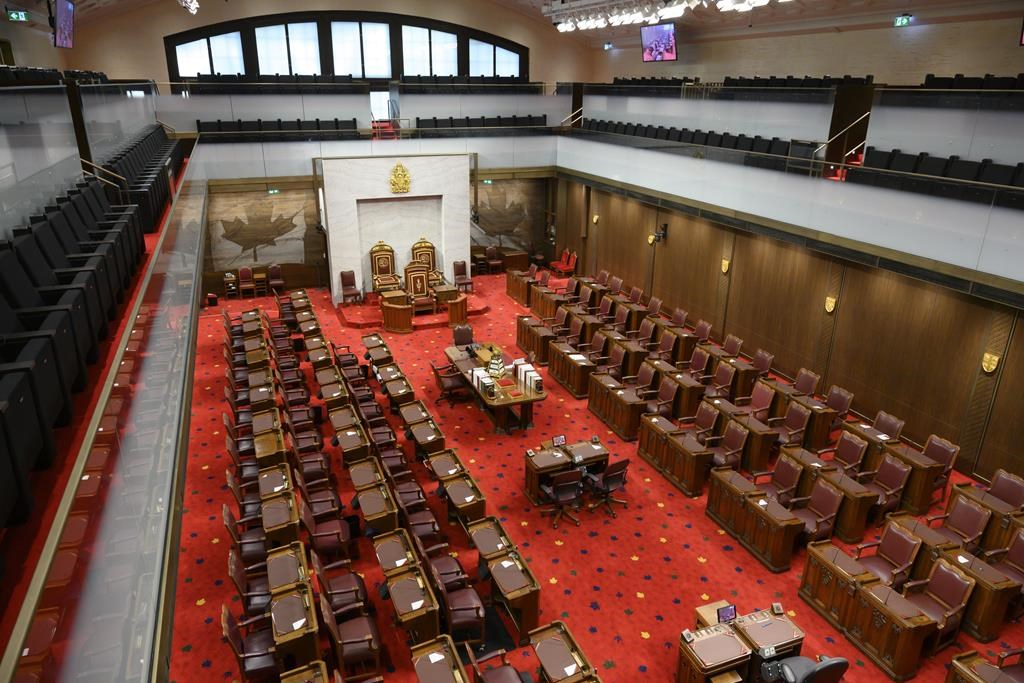 The Senate of Canada building and Senate Chamber are pictured in Ottawa on February 18, 2019. File photo by The Canadian Press/Sean Kilpatrick
Previous story
Next story

Senators will have to be fully vaccinated against COVID-19 if they want to participate in person in Senate proceedings.

Senate Speaker George Furey announced the new policy Thursday following consultations with the leaders of the various groups in the upper house.

But although Conservative Senate leader Don Plett was among those consulted on the policy, his office refused to say how many of his 18-member caucus have been immunized.

"Sen. Plett took part in the discussion and the agreement amongst Senate leaders. We have no further comments," said his spokeswoman, Karine Leroux.

Conservatives in the House of Commons have objected to a similar policy adopted last week for elected members of Parliament. Leader Erin O'Toole has refused to disclose the vaccination status of his 118 MPs.

A spokesman for Furey said the Senate's mandatory vaccination rule will apply to senators attending proceedings in the Senate chamber itself and also to Senate committee meetings — with an option for those with a valid medical exemption to show proof of a recent negative COVID-19 test.

The Senate's internal economy committee is to meet soon to determine whether immunization will also be mandatory for staffers in senators' offices and other employees of the upper house.

Last week, the governing body of the House of Commons decided that anyone wishing to enter the Commons precinct will have to be double vaccinated.

The decision of the multi-party board of internal economy applies to MPs, their staff, employees of the House of Commons administration, journalists and anyone else who wishes to enter the Commons chamber. The policy also applies to a host of other buildings that house MPs' offices, committee rooms and other offices related to the operation of the House, including a number of buildings far removed from Parliament Hill.

A memo circulated to employees of the House earlier this week from the administration's chief information officer, Stephan Aube, indicated that working from home will not be an option for those who refuse to get vaccinated without a valid medical exemption.

#Senators will need to be fully vaccinated to set foot in Senate chamber. #CDNPoli #COVID19

"Although it may affect different employees at different times, this new requirement will apply to virtual and on-site employees alike," Aube wrote.

"The House of Commons is currently working on a COVID-19 vaccination policy (for) employees, which will determine how this new requirement is applied."

That sets up a potential scenario in which unvaccinated Conservative MPs may be able to participate in proceedings remotely while their staffers cannot.

The governing Liberals and the NDP have indicated they're in favour of continuing with a hybrid format for the Commons, adopted during the pandemic to allow MPs to participate in proceedings virtually from their homes or offices while keeping the number physically present in the chamber to a minimum.

The Conservatives and Bloc Quebecois want the House to resume normal, in-person operations.

While O'Toole is opposed to resuming hybrid sittings, it is the only way the unknown number of his MPs who've refused to be vaccinated or who refuse to disclose their immunization status would be able to participate in proceedings, under the board of internal economy's policy.

O'Toole has said all Conservative MPs will abide by the board's decision on mandatory vaccinations but he has also served notice that his party will challenge the board's authority to ban unvaccinated MPs from the Commons precinct.

However, even if they succeed in forcing a vote on the matter in the House, the policy is unlikely to change since all other parties favour mandatory vaccination.

The other parties also say all their members are fully vaccinated, save for one Liberal MP with a medical exemption.

On the Senate side, a spokeswoman for the largest group, the Independent Senators Group, said all 43 of its members have had two shots of an approved vaccine.

The same is true for the 13 members of the Canadian Senators Group, according to leader Sen. Scott Tannas' office.

Sen. Jane Cordy's office did not immediately respond to a request for comment on the immunization status of the 14-member Progressive Senate Group, which she leads.

House of Commons precinct limits entry to only those fully vaxxed