A ‘sleeping giant’ awakens for COP26 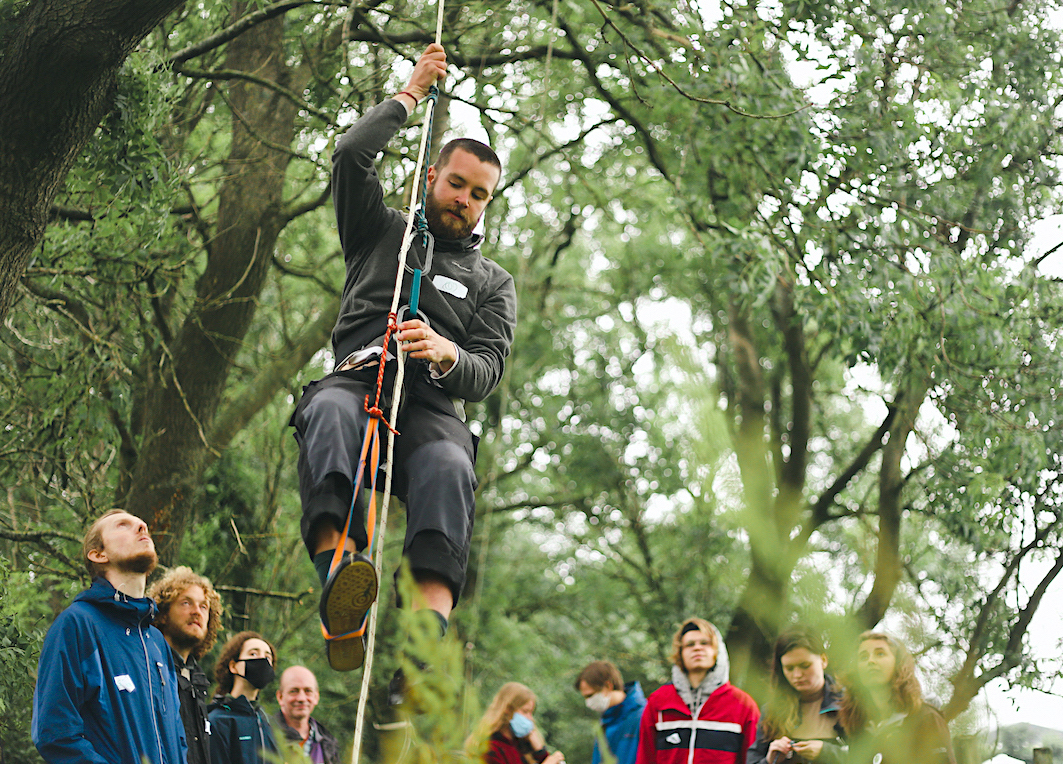 A multitude of civil society stakeholders and action groups — in the U.K. and around the world — are mobilizing to push for transformational change to tackle the global emergency, said Marco Tenconi, an organizer with the COP26 Coalition, one of the largest umbrella groups fighting for climate justice at the conference.

The coalition has been organizing for 18 months with trade unions, NGOs, community campaigns, migrant and racial justice networks, direct action and faith groups, Indigenous peoples, and climate leaders to stage a “counter COP,” featuring a Global Day of Action on Nov. 6 and the ensuing People’s Summit, he said.

Despite a healthy dose of skepticism about the U.K. government’s commitment to inclusivity at COP26 and whether world leaders will take the drastic action the climate emergency demands, the mood on the ground in Glasgow and within the global climate movement is one of growing energy and anticipation, Tenconi said.

“It’s like a sleeping giant has been woken after two years of the pandemic,” he said.

“We can’t not be filled with real excitement and the adrenalin and hope you get from knowing the strength you have in numbers.

"The thing about grassroots organizing is that against all odds, you just feel the power and strength of solidarity."

However, there’s also dismay that many fellow activists and climate leaders, particularly from the Global South, can’t be at COP26, Tenconi said.

“There’s also a huge sense of regret because we know if it wasn’t for the incompetency of our governments, a lot more of our sisters and brothers would be with us.”

Aside from the logistical challenges typically associated with the ambitious scale of events being planned by the coalition — and in a pandemic — organizers have also assumed the responsibilities of the U.K. government in securing visas and accommodations for members of civil society, particularly those from red-listed countries in the Global South, he said.

“It’s like a sleeping giant has been woken after two years of the pandemic,” says @COP26_Coalition organizer Marco Tenconi about the momentum of the grassroots movement aiming to hold world leaders accountable at #COP26. #ClimateEmergency

The U.K. government’s utter failure to ensure some of the world’s most important voices attend COP26 is no accident and benefits private and government interests, he said.

“It’s a pretence of incompetence,” Tenconi said, adding there are instances where countries have waived visas in the past so people can attend international football matches, yet Indigenous leaders from the countries most affected by climate change can’t attend a conference of global importance.

“We have a host government that seems hell-bent on doing everything it can not to facilitate an inclusive and genuinely fair COP,” he said, “much less whether it is going to facilitate transformational geopolitical change.

“They haven’t even dealt with the basic housekeeping, like making sure people can even arrive.”

But the obstacles won’t deter the coalition from advancing the movement’s primary objective.

“How can we get justice at the centre of the agenda? That's really our main concern,” Tenconi said.

The coalition and its partners are focusing on three demands. The first is to dissemble false solutions, such as carbon capture and net-zero, he said.

“For the past 30 years, the model has been to ask the perpetrators of the crime how we can stop them from repeat-offending,” Tenconi said.

“Which means that we end up with all these false solutions and all this dodgy accounting that allows them to continue to pollute while making it seem like they're not.”

The only real net-zero solution involves no more fossil fuel investments and holding the companies culpable for some many harms accountable, he added.

The second focus is on a just transition for workers — in Scotland and worldwide.

Oil and gas extraction is one of the largest and last industrial employers in Scotland, he said.

“We want governments really prioritizing and shifting away from fossil fuel (interests) to focus on workers and their rights and their livelihoods first.”

What’s more, the Global North is infamous for shuttering dirty, polluting industries at home and setting them up in southern countries where northern countries exploit labour with impunity, he said.

“So, how will we build a just transition with all the workers in the world in mind?”

Global North countries — currently and historically responsible for the lion’s share of emissions, and enriched at the expense of the Global South — continue to balk at paying for those countries’ climate adaptation, he said.

Movement is already afoot at COP26 to water down or bypass discussion of redistribution or reparations to nations or communities that deserve them, he said.

“We want to mainstream the idea that it's not enough for the Global North countries to just sort of do their bit,” Tenconi said.

“Fundamentally, in the most basic moral sense, they owe it to the Global South to help them with debt cancellation, with grants and technology transfers, and really, any means possible to accelerate their transitions.”

Although many activists are unable to attend COP26 in person, much of the coalition’s Day of Action and People's Summit will be virtual, so people around the world can tune in, participate, and be inspired by climate heavy-hitters at the rally, such as activist Greta Thunberg, and U.S. congresswoman Ilhan Omar who will attend digitally, he said.

Thousands upon thousands will be marching in downtown Glasgow on Nov. 6, Tenconi said.

“We are going to be out there in huge numbers,” he said, adding 18 different activist blocs are attending.

“Many different communities and people are turning out in huge force.”

Demonstrations on the streets of Glasgow have already begun.

The Glasgow Actions Team (GAT) staged an art installation on Thursday, symbolically setting Glasgow’s iconic George Square “on fire” as a welcome for world leaders arriving for the conference, and to remind them of their obligations at the upcoming climate negotiations

Protesters unfurled a huge banner calling for the end of the climate emergency in tandem with mockups of enormous fire extinguishers, massive cardboard flames, dry ice, and smoke.

The atmosphere couldn’t be ignored, said GAT director Andrew Nazdin, adding the flames and smoke at the protest are a graphic reminder of the impending calamity the climate crisis holds.

“Unless world leaders step up their ambition and deliver on the promise of the Paris climate agreement and take it further, we're going to see mass devastation around the world,” Nazdin said.

“And different people from across the movement are showing up in different ways, and art can be a powerful way to make sure those people's voices are heard.”

Much of the grassroots movement at COP26 will involve building solidarity and engaging in dialogue — but direct action is also definitely on the agenda, said Tenconi, who is uncharacteristically desk-bound following his involvement in an occupation of Shell oil rig moored for repairs in the city of Dundee’s harbour last year.

“I’m usually involved in a direct action role, but I’m on bail right now … rather than something more interesting,” he said.

The people of Glasgow, and Scotland as a whole, are renowned for their spirit and tenacity, and any real commitment from political leaders at COP26 will be the result of pressure by civil society, Tenconi said.

“The emphasis for change never comes from them, but from the ground up and from grassroots holding their feet to the fire,” he said.

“There’s going to be a heck of a lot of direct action and disruption and really powerful symbolic acts to grab the attention of those world leaders by people trying to change the narrative. “

This story was updated to clarify that "some governments", not specifically the UK government, have waived visas to allow international visitors to more easily attend important football matches.