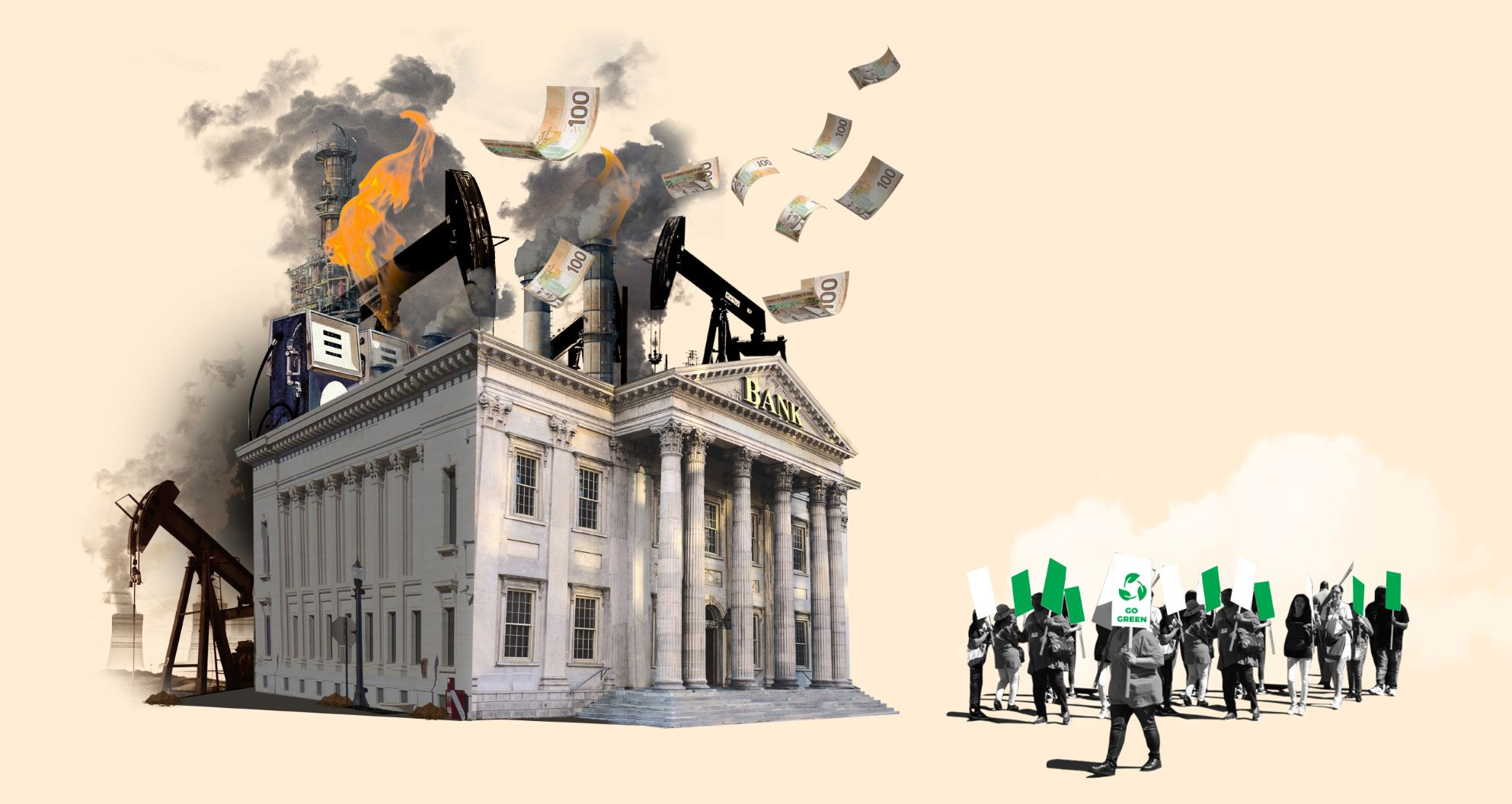 In Canada, the Big Six banks are among the country’s largest and most influential institutions. They also intersect with fossil fuel companies in many ways. Illustration by: Matthew Billington
Previous story
Next story

Antonia Ramirez was finishing her bachelor of fine arts program at Simon Fraser University in Burnaby, B.C., and enduring her second COVID-19 lockdown.

So, she figured she’d use the time to get caught up on some reading, especially material about the environment, which she describes as a “passion.”

She recalls “stumbling” onto a report called Banking on Climate Change, “which compelled me into a five-day deep dive … that led me to the realization that RBC, the bank that I had been with at the time (and) the bank that my family banked with, was pumping billions of dollars into fossil fuel expansion projects.

“I was angry and I felt betrayed ... and so I turned to my closest group of friends, who I have known since I was a kid, we went to middle school together … they all happened to be involved in the environmental sector to some capacity … ”

Last August, the group of friends designed an Instagram campaign called BankSwitch, which urged people to withdraw their accounts from five of the Big Six banks — National Bank of Canada, Royal Bank of Canada, Bank of Montreal (BMO), Canadian Imperial Bank of Commerce (CIBC), Scotiabank, and Toronto Dominion Bank (TD) — and move their money to more environmentally friendly institutions such as credit unions.

Ramirez created a slideshow for each bank, with information about their fossil fuel investments. The final slide urged her followers to take further action once they had made the switch.

“It was important for us to target that demographic of people because we understood that this cohort of young people would one day have mortgages that banks would profit off of, or have big loans that they would have to take out,” said Ramirez.

Ramirez explains how her group's Instagram campaign was received.

In the 2021 report Banking on Climate Chaos, RBC, TD, Scotiabank, and CIBC, were identified as being among the top 25 funders of fossil fuel companies between 2016 and 2020. #Divestment #ClimateFinance #SustainableFinance

Ramirez and her bank-switchers are not alone. Discontented voices are also emerging from within the financial sectors of the world’s richest countries, including Canada.

Calls for action began after the 2015 United Nations climate summit in Paris, which saw countries commit to reducing their greenhouse gas emissions to keep global warming under 1.5 C. No easy feat, given the reliance on fossil fuels — which emit greenhouse gases when burned and are the primary contributor to climate change — to power vehicles, heat buildings, put money into government coffers and reward investors.

Back then, there was a realization that financial institutions needed to change the way they did business. But decreasing fossil fuel investments wouldn’t happen overnight. The institutions needed to decarbonize their portfolios, which meant divesting from fossil fuels without incurring too much risk, and then finding cleaner energy options, such as wind, hydrogen and solar.

A task force composed of leaders and central bankers from G20 countries concluded that financial institutions such as banks needed to do more if they wanted to honour their commitments.

“There’s a growing demand for decision-useful, climate-related information by a range of participants in the financial markets,” concluded the 2017 task force report, which recommended ways to tell investors about the risks associated with their fossil fuel investments and how the institutions intended to transition to a lower-carbon economy.

But the recommendations were just that: voluntary calls for action.

While they concede banks say all the right things, activists argue the time for voluntary, incremental action is over. They’re demanding immediate moves: divest from fossil fuels, stop lending to people and institutions that refuse to reduce their carbon footprint and put more money into renewable sources of energy, to name a few.

The demands were reflected in a recent international campaign that amounted to what the activists dubbed a “global call on banks,” including Canada’s Big Six.

Maaike Beenes, the co-ordinator of the climate team with the Netherlands-based group BankTrack, was one of more than 200 advocacy groups across the globe that signed on to the pressure tactics aimed at banks, including those in Canada.

Their list of demands is also detailed: stop financing the coal industry, stop pumping money into shale and fracked gas in Canada, and consider the human rights impacts of projects on Indigenous peoples.

Beenes concedes immediate divestment is tricky and can’t be phased out “tomorrow.” However, “(banks) should be demanding from their clients that they have a transition plan in line with Paris. So, that means short-term goals, intermediate goals for 2025 and 2030 … that is very possible,” said Beenes in an interview with Canada’s National Observer.

In the lead-up to COP26, this year's UN climate conference, Beenes, Ramirez and other experts and activists who we interviewed are hoping the international spotlight will increase the pressure on banks.

Canada’s National Observer sought interviews to discuss the movement with all Big Six banks. National Bank, Scotiabank and the Royal Bank of Canada responded with written statements reiterating their publicly stated net-zero commitments that have been made in recent financial filings and news releases.

“... Our climate strategy … will support efforts to define how we achieve our goals as we work in close partnership with our clients to meet their sustainability goals,” wrote RBC director of corporate communications Rafael Ruffolo.

“As the world is still largely dependent on fossil fuels, we have begun the delicate work of helping clients in the energy business to transition to low carbon, while also working to help drive down demand within certain sectors of the economy with high energy use,” wrote Scotiabank’s senior manager of ESG (environmental, social, and governance) communications Fiona Johnston.

As far as Beenes is concerned, these commitments are a good start, but only that.

“I also want to believe that they are trying to do their best, but it seems like these (semantics) are used to make things look better than they are.”

Why are banks being targeted?

In Canada, the Big Six banks are among the country’s largest and most influential institutions. They intersect with fossil fuel companies in many ways.

As Donald Gutstein explains in his report for the Canadian Centre for Policy Alternatives, Fossilized Finance: How Canada’s banks still enable oil and gas production, when oil and gas companies don’t have enough cash to cover their expenses, they look to banks to borrow, raise capital, advise or invest.

Their size and reach also make them key players in the country’s bid to pivot to a greener economy.

“They could be playing a crucial role in helping Canada achieve its Paris Agreement commitments to reduce greenhouse gas emissions … below 2005 levels by 2030,” writes Gutstein in his report.

As far as activists are concerned, key investment numbers tell a different story of a banking sector that says one thing publicly, but continues to invest in fossil fuels away from the spotlight.

Though they diminished in 2020, largely because of the pandemic, the fossil fuel investments of many of the world’s largest banks steadily increased between 2016 and 2019.

In the 2021 report called Banking on Climate Chaos, RBC, TD, Scotiabank, Bank of Montreal, and CIBC were identified as being among the top 25 funders of fossil fuel companies between 2016 and 2020, as you can see in the graphic below.

(Click on the tabs to see the numbers for each year.)

Canada’s National Observer once again attempted to contact the banks on the Rainforest Action Network’s list for their reaction. At the time of publication, only RBC responded.

Spokesperson Ruffolo wrote: “The methodology used for the .... report is not in line with our own accounting practices, which presents challenges in commenting on the figures.”

Canada’s Big Six banks are pushing back against suggestions they are laggards. On Oct. 15, they issued a joint news release announcing something they had been criticized for avoiding up to that point: joining the Net-Zero Banking Alliance.

Initiated by Mark Carney, former governor of the Bank of Canada and the Bank of England, the alliance is designed to help banks move towards net-zero by “financing the climate transition and (supporting) collaborative approaches between the public and private sectors to reach the goal of net-zero by 2050.”

And once again, the criticism from advocates has been the same. Vague words that do little to address their demands, which call for more immediate and concrete action.

There’s also a debate between banks and advocates about the kinds of emissions being targeted, in large part because not all emissions are created equal.

They fall into three broad categories: Scope 1, Scope 2 and Scope 3. The first two are emissions caused by the direct activities of a bank, such as the energy used to heat the building.

As my colleague John Woodside explained in his recent article about Canada’s dirtiest emitters, “because the majority of emissions from the oil and gas industry arise when the product is burned, Scope 3 emissions are the most critical from a global perspective — and they are typically left out of the industry’s net-zero plans ... Scope 3 emissions don’t only apply to fossil fuel companies, but to a broader range of clients who borrow from banks.”

While RBC’s Ruffolo says in his written statement the bank is “accelerating (its) efforts to calculate and disclose Scope 3 clients' emissions and the setting of interim goals,” advocates express doubts.

“We see a lot of problems with the net-zero commitments and the fact that they may not cover underwriting, for example. If as a bank you say, ‘We have a net-zero commitment for 2050’ and it only covers your Scope 1 and 2 emissions, then nobody will really take you seriously.”

If banks are going to have to someday provide more details about Scope 3 emissions from clients, a number of questions arise.

For instance, should you lend money to a small business that has no plans to reduce carbon emissions, or that has no desire to retrofit its energy-inefficient building?

These are the kinds of questions Canada’s largest credit union grapples with every day.

“Just because we don't fund fossil fuels doesn’t mean we don’t have work to do in front of us. We’re at a different starting point,” says Jonathan Fowlie, Vancity’s chief external relations officer.

“Scope 3 can cover many things. When a bank or credit union loans money to an individual or organization, what are the emissions emerging that are resulting from that loan?”

Fowlie says before financial institutions were seized with concerns about climate change, typical questions included: “Do you have a good business plan? What access to capital do you have? Is this going to be a viable business?”

Now those questions Vancity poses have expanded to climate-related issues: “What is your emissions profile? How are you looking to play a part in creating a clean and fair world?”

Where do we go from here?

The road ahead for banks will be difficult as they try to navigate the expectations to decarbonize with concerns about divesting too quickly, especially at a time when oil prices are rising.

For their part, advocates say their pressure will only intensify because while banks may be too big to fail, they are too important to ignore. That means more annual report cards on fossil fuel investments, more rallies in front of bank branches and head offices, and more campaigns on social media platforms such as Instagram.

Ramirez has no plans to let up. She and her young colleagues will continue to press their case because as they see it, there’s no time to lose.

The thing is that in general,

The thing is that in general, on pretty much every issue that comes up, big banks will turn out to be on the wrong side of it. I'm happy to be using a credit union.