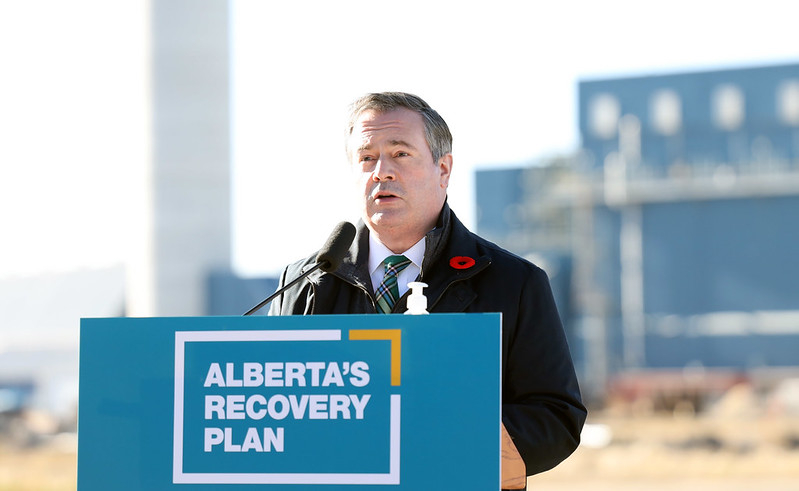 For months now, Canada’s oil and gas companies have been talking a good game about their commitment to reaching net-zero emissions by 2050. In Glasgow, at the COP26 climate conference, Prime Minister Justin Trudeau just called their bluff.

By announcing that his government will implement a cap on oil and gas sector emissions, effective immediately, the federal government will put its regulatory muscle behind promises the industry has been making. Now, we will find out if they actually have the cards or not.

Even if it only formalizes the fine words that have been uttered by industry, Canada’s decision to implement a cap on oil and gas sector greenhouse gas emissions is significant."That's no small task for a major oil and gas producing country,” Trudeau said. “It's a big step that's absolutely necessary."

Indeed, it is. In 2019, those emissions totaled 191 megatonnes, which was 26 per cent of the country's total emissions (transportation came in a close second at 186 megatonnes).

Already a plan to cut emissions

The Pathways Alliance, which includes the five largest oilsands producers in Canada, had already laid out a roadmap that would see it cut its emissions by 22 megatonnes over the next decade, and a further 25 MT in the decade ending in 2040. They did this because they understand they need to attract capital in a world where big investors care about climate risk.

They also did it because they understand a cap on emissions isn’t necessarily a cap on production, nor a constraint on their ability to sell oil and gas. Instead, it’s a challenge: If the oil and gas industry wants to grow its top and bottom lines, it needs to drive emissions down to zero as quickly as possible.

But if you were expecting Alberta’s current political leadership or the phalanx of Postmedia columnists that enable it to respond maturely here, you haven’t been paying attention. Calgary Herald columnist Don Braid was first out of the gate with a column suggesting the cap on oil and gas industry emissions represented “a spectacular case of regional unfairness” given that transportation sector emissions (and, by extension, Ontario and Quebec) weren’t restricted.

Transportation sector faces a cap, too

This ignores the obvious reality that a steadily rising carbon tax, one that will reach $170 per tonne by 2030, is a de-facto cap. When combined with the government’s new zero-emissions vehicle mandate, one that replaced a voluntary target and will require all new cars and light trucks to be fossil fuel-free by 2035, the resulting cap on those emissions are effectively more stringent than the one on the oil and gas industry.

"This temper tantrum coming from certain parts of Alberta is much ado about not very much," writes @natobserver columnist @maxfawcett about Alberta's response to oil and gas emission cap. #abpoli #emissions #COP26 #cdnpoli

Alberta Premier Jason Kenney, meanwhile, used the announcement as an opportunity to churn up more alienation and anger towards Ottawa, the political colours with which he prefers to paint. “Our message to them is simply this: the government of Canada has zero chance of achieving its greenhouse gas emission reduction targets without Alberta ... We need to be partners in this. Let’s sit down and figure it out together,” he said. “Instead, we seem to constantly deal with improvised targets of ever-increasing ambition from a federal government that’s never come close to meeting its targets.”

This is a colourful bit of revisionist history from the premier, who is clearly hoping people don’t remember the letter former federal environment minister and new Natural Resources Minister Jonathan Wilkinson wrote to Alberta’s environment minister back in 2020. "We continue to encourage Alberta to follow through and fully implement its legislation to limit emissions to 100 million tonnes from the oilsands," Wilkinson wrote, referring to legislation introduced by the NDP government led by Rachel Notley in 2016.

In other words, this temper tantrum coming from certain parts of Alberta is much ado about not very much. Alberta’s oil and gas industry is welcome to follow through on its own promises, and more aggressively decarbonize its oil and gas production than it has to date. The federal government, for its part, will probably throw more money at those efforts than climate activists would like to see — not the $32 billion that Kenney demanded in his Monday press conference, surely, but more than the zero they’re calling for.

If there’s a misstep here on Ottawa’s part, it’s in not tying the net-zero commitments from industry more visibly to their own. In 2016, when then-premier Notley announced the Climate Leadership Plan, she made sure that CEOs like Canadian Natural Resources’ Murray Edwards and Suncor’s Steve Williams were on the same stage with her. But maybe, after watching the way the industry proceeded to stick sharp objects in Notley’s back over the ensuing three years, Trudeau decided it isn’t worth the risk — or the effort. And that, more than anything, should be what keeps the oil and gas industry’s leaders up at night.

Well, he's saying it for self

Well, he's saying it for self-serving, counterproductive reasons, but this: "we seem to constantly deal with improvised targets of ever-increasing ambition from a federal government that’s never come close to meeting its targets" Well. Even a stopped clock etc etc.

As to the cap on emissions, it sounds lovely, but it probably doesn't mean much. First, it doesn't mean much because the really important thing is how much the stuff emits when it gets burned, and making less emissions dragging it out of the ground doesn't change that; Mr. Fawcett himself points out--as if it was a good thing, yet!--that it is in no way a cap on production. Second, it doesn't mean much because I don't see any figures about what the cap is and whether it's at a level which will actually require any changes in oil company behaviour.
Is it even an annual cap? For all I know it's a sort of "lifetime" cap, where there's a maximum on the amount they're allowed to emit, like, EVER--which would seem more stringent but means it would be pointless and unenforceable because they won't blow through the lifetime cap this year, or next, no matter what they do, and if they just go sailing merrily along and in ten years come up against the cap it'll just be oh dear, blew through the cap, what are you gonna do about it? And the government of the day will nod sagely along with a coterie of oil company lobbyists and say "Oh dear. I suppose that cap was unrealistic. We'll have to set a new cap, twice as high."

The solution to the emissions

The solution to the emissions problem in Alberta bitumen production is simple: Reduce demand for bitumen. Without gas tanks the oil companies are doomed to direct serious investments into renewables or clean tech at home, while withering with decreasing demand for exported bitumen to the US. Maturing carbon taxes and higher market prices for oil will grease the slide.

Reducing bitumen demand leads directly to the electrification of the transport sector. It will be impossible to replace the entire car fleet with electric vehicles because there isn't enough lithium in the world or zero emission generation capacity at present to do so. Ergo transit expansion, better zoning and engineering practices to upgrade our distinctly last century urbanism, and more direct investment into clean energy.

The solution to "alienation" in Alberta is to stop overestimating and fearing it. It's been sounding off for 50 years. In the age of climate change it's time to all the "separatists" to put up or shut up. Hold another referendum already, and challenge the Yes side to produce a workable plan under the hard negotiations of the Clarity Act and to prove that it truly understands the consequences of divorce, including the loss of a half million people and hundreds of businesses as much greater instability settles in.

And in Ontario, there'll be

And in Ontario, there'll be more use of "natural" gas to produce hydro ...

Several provinces were on track to meet their 2030 goals ... unfortunately, their emissions savings were cancelled out by the ever-growing emissions of Alberta and Saskatchewan, together amounting to some 15% of the population, while Ontario and Quebec, together comprising some 60% of the national population, were on track to meet their "share" of the target. Not only did Alberta and Saskatchewan not meet their own 15% of emissions reductions, but increased emissions enough to wipe out those gains of not only Ontario and Quebec, but virtually all the gains made by all the provinces, combined.

I'm concerned about weasel wording in even the announcements of targets that fall far short of where they need to be set. "Emissions" has been in the past tacitly agreed between the PM's office and the OilCo lobbies, to mean "cap on emissions density."

Another one is "unabated coal." Very curious terminology that some of us would like to think means, "decreasing production," though it might well mean as long as it keeps coming out of the ground at least as fast as it's done to date.