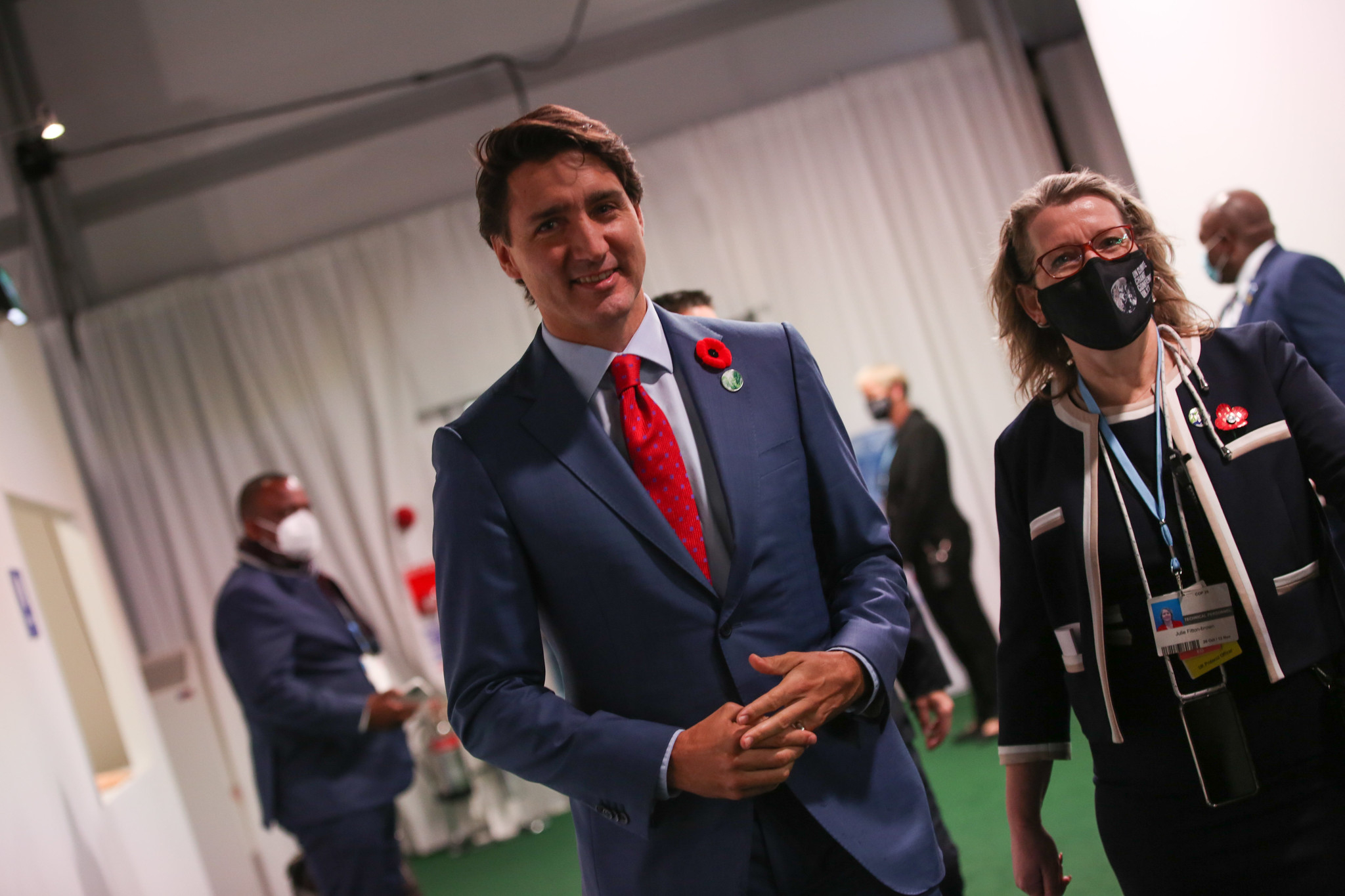 “The day before, the temperature had hit 49.6 C, the hottest ever recorded in our country,” he said.

“What happened in Lytton can, and has, and will happen anywhere. How many more signs do we need? This is our time to step up, and step up together,” he said.

Canada is warming on average twice as quickly as the rest of the world, and the pace in the Arctic is even higher, Trudeau noted.

Trudeau’s remarks added to a mountain of dire warnings issued by other global leaders Monday at the international climate negotiations.

Boris Johnson, prime minister of the United Kingdom and host of COP26, called climate change a “doomsday device” strapped to humanity, while UN secretary-general António Guterres said people are “digging our own graves.”

U.S. President Joe Biden, who is trying to redefine the United States after former-president Donald Trump formally withdrew the U.S. from the Paris Agreement, said COP26 must kick-start a “decade of ambition and innovation to preserve our shared future.”

“We will demonstrate to the world the United States is not only back at the table but hopefully leading by the power of our example,” Biden said.

There was shame cast from leaders of more vulnerable nations, like Barbados Prime Minister Mia Mottley, who urged leaders of richer countries not to “allow the path of greed and selfishness to sow the seeds of our common destruction.”

Some new promises were made, but lobbed far into the future. Indian Prime Minister Narendra Modi said his country will aim to reach net-zero by 2070. That would be 20 years later than the U.S. and at least a decade later than China.

“Trudeau has identified the problem correctly, which is oil and gas, but has come up with the wrong solution, which is looking at emissions and not production," says @CCDale with @envirodefence. #COP26 #cdnpoli

During his brief speech, Trudeau called for a global price on pollution and reiterated a campaign promise to cap oil and gas emissions.

Trudeau said a carbon price is “key” to getting emissions down by creating a market incentive to move off fossil fuels, calling Canada’s escalating carbon price one of the most “globally ambitious,” and urging other countries to follow suit.

“Just as globally we’ve agreed to a minimum corporate tax, we must work together to ensure it’s no longer free to pollute anywhere in the world,” Trudeau said.

“That means establishing a shared minimum standard for pricing pollution.”

Environmental Defence national program manager Dale Marshall said he’s in favour of a global price on pollution, but before Canada calls on other countries to do more, it should step up climate action at home, citing Canada’s emissions rising more than any other G7 country, Canada providing more public financing for fossil fuels than any G20 country, and not spending $5 billion annually (Canada’s calculated fair share) for international climate financing.

Earlier this year, Canada announced it would double its international climate financing from $2.65 billion to $5.3 billion over the next five years, or just over $1 billion a year.

Moreover, while an important tool in the fight against climate change, “there are actually more important ones that are being discussed here that I'd love Canada to join,” Marshall said.

Marshall said Canada should join the U.K.’s alliance to phase out public financing for fossil fuels, as well as the Beyond Oil and Gas Alliance being launched by Costa Rica and Denmark.

Trudeau called the expected emissions cap “no small task” for an oil and gas producing country like Canada, but said it was “absolutely necessary” to bring down emissions from that sector, which is by far the most polluting in Canada.

“We’ll cap oil and gas sector emissions today, and ensure they decrease tomorrow at a pace and scale needed to reach net-zero by 2050,” he said.

“Trudeau has identified the problem correctly, which is oil and gas, but has come up with the wrong solution, which is looking at emissions and not production,” Marshall said.

“Looking at production emissions solves 20 to 30 per cent of the problem,” he added.

Because 70 to 80 per cent of emissions from the oil and gas industry come when the product is burned, Scope 3 emissions are the most critical from a global perspective.

In other words, even if Canada could bring emissions from the production of oil and gas to zero, it would still miss the majority of emissions that ultimately come from the sector, limiting how effective that policy promise is.

Marshall said by not focussing on production, it gives oil and gas companies room to delay meaningful climate action by pushing “false solutions like carbon capture and storage, and fossil based hydrogen” that allow production of oil and gas to expand.

There are political challenges to regulating oil and gas production; namely that provinces have jurisdiction over natural resource development. Still, Marshall said there are ways for Canada to assert jurisdiction to keep provinces onside with the country’s climate commitments.

“Right now, in the Impact Assessment Act, there is a hook in there that says there has to be some kind of climate test that has to be met in order for projects to get the go-ahead,” he said. “Why don’t we not make that a robust climate test?”

That’s effectively what was done earlier this year with thermal coal, when Canada announced a new policy that then-environment minister Jonathan Wilkinson explained was adopted to signal to developers it would be “extremely unlikely” for new thermal coal projects to get approved because of “unacceptable environmental impacts.”

Similarly, Marshall said Canada has jurisdiction over exports, which is essentially Canada’s oil and gas problem given the country exports more oil than it consumes.

Yes, it’s all about Scope 3

Yes, it’s all about Scope 3 emissions.

But... what IS the proposed

But... what IS the proposed cap on Oil &Gas emissions? Alberta already has a legislated O&G emissions cap of 100 megatonnes introduced by the Notley Government, but that allows a huge expansion from the present 70 megatonnes it spews in the air. Until a number is specified, this is meaningless - just more pretty words hiding the on-the-ground truth of dilbit pipeline and LNG expansions.