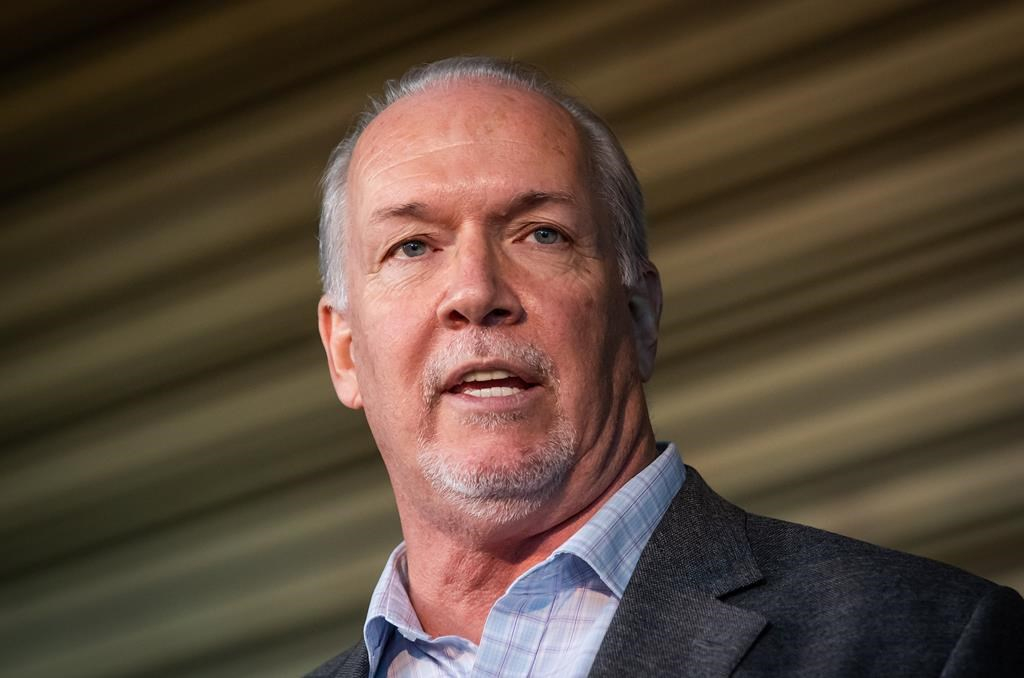 British Columbia Premier John Horgan says a biopsy has shown a growth in his throat was cancerous, but his prognosis is good and he expects to make a full recovery.

He will begin radiation treatment in the next couple of weeks, which he said will end in late December.

"The surgery and biopsy that were done last week were successful and I am grateful to the health-care team for all the support I've received," Horgan said in a statement on Thursday.

The premier received get-well wishes from across the country, including one from Prime Minister Justin Trudeau and his wife, Sophie.

"I'm sorry to hear this — but I know you'll approach this challenge with courage and resolve," Trudeau posted on social media. "Canadians across the country are pulling for you — and so are Sophie and I."

I’m sending strength and support to Premier @JJHorgan today. John, I’m sorry to hear this news - but I know you’ll approach this challenge with courage and resolve. Canadians across the country are pulling for you - and so are Sophie and I. https://t.co/nMvqq6hrCS

"Sending you lots of love and strength," Singh posted on behalf of himself and his wife, Gurkiran.

Sending you lots of love and strength, my friend.

Gurkiran and I are wishing you a quick and speedy recovery.🧡 https://t.co/xsCsi2fzvU

Ontario Premier Doug Ford said on social media: "John, you're a fighter. We're cheering you on here in Ontario."

I want to send my heartfelt wishes for a full and speedy recovery to Premier @jjhorgan. John, you are a fighter. We’re cheering you on here in Ontario. https://t.co/9QPstb3kXm

Horgan said he plans to participate virtually in briefings, cabinet meetings, and other important meetings like the Council of the Federation set for next month.

Solicitor General Mike Farnworth, whom Horgan appointed deputy premier last month after he announced the biopsy surgery, said he will fulfil whatever duties the premier requires of him.

"My role is to support him in any way I can," Farnworth said Thursday.

"He's eager to get back here as soon as he can," he said.

"It's the news that nobody wants to hear," he said. "It's very concerning when you hear the word 'cancer.'"

Horgan, 62, was diagnosed with bladder cancer in his 40s, but underwent successful treatment.

He said last month he noticed a lump on his neck, which required a biopsy last Friday.

Farnworth, the NDP's house leader, said he expected to attend briefings and meetings on the premier's behalf, and will assist in whatever way is required.

Horgan said when he appointed Farnworth deputy premier he wanted the public to be confident in the guidance the veteran minister will provide in his absence.

B.C. Premier John Horgan booked for biopsy surgery for growth in his throat