By Cloe Logan | News | November 4th 2021
#60 of 99 articles from the Special Report: COP26: Uniting the World to Tackle Climate Change 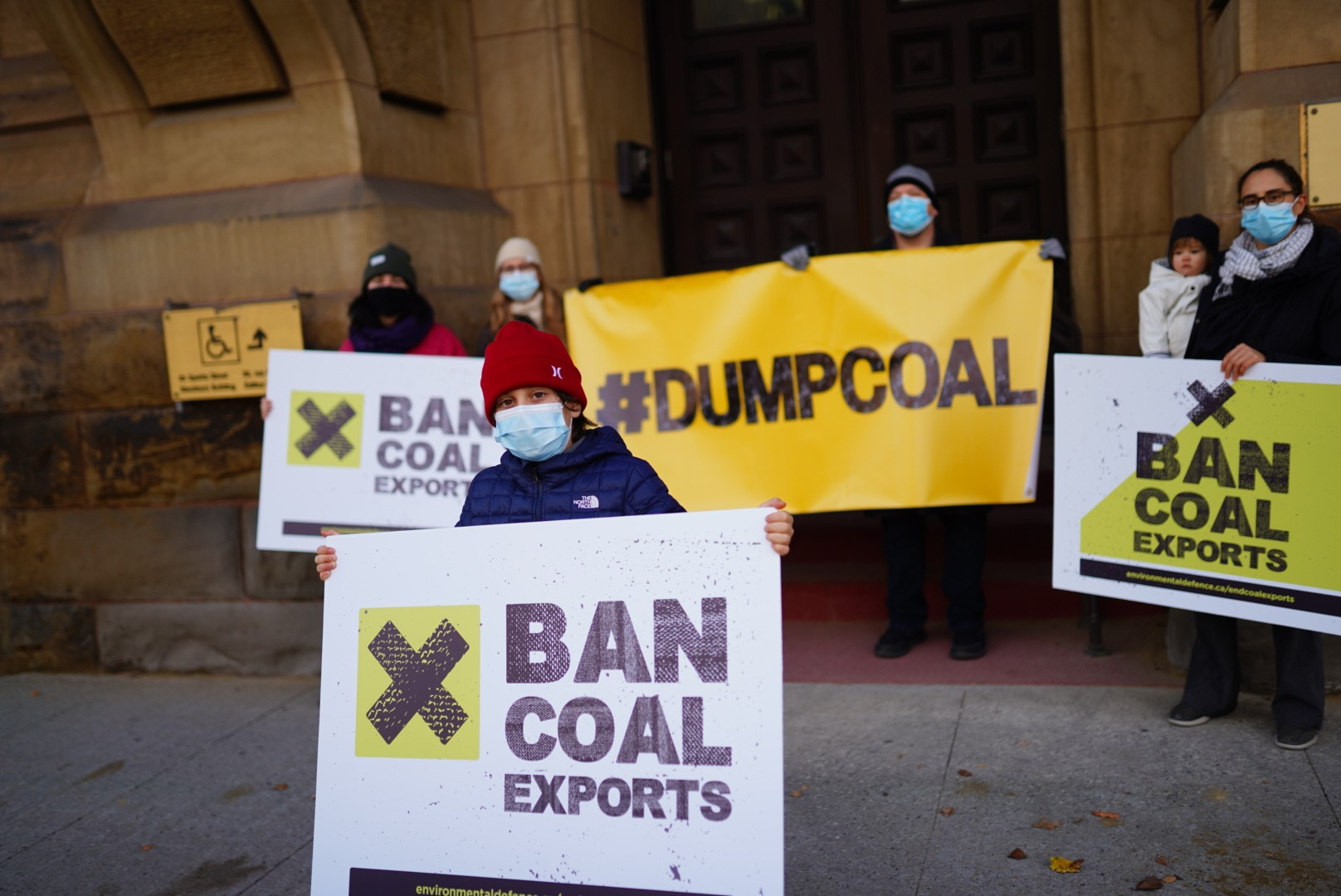 Opponents of coal exports delivered petitions to the Prime Minister’s Office in Ottawa on Nov. 2. Photo by Eagleclaw Thom
Previous story
Next story

Thursday was a big day for Canada at COP26 — the country pledged to end foreign fossil fuel finance by 2022 and Quebec signed on to the Beyond Oil and Gas Alliance — but observers are disappointed the country isn’t moving faster to ditch the planet’s dirtiest fossil fuel: coal.

Earlier in the week, numerous environmental, health and other groups delivered petitions with more than 30,000 signatures to Prime Minister Justin Trudeau, calling on his government to ban the export of thermal coal by 2023, rather than 2030.

Groups awaited an updated commitment from Canada, but at a Powering Past Coal Alliance (PPCA) event, which Canada co-founded, no new promises were made.

Environment and Climate Change Minister Steven Guilbeault was in Glasgow at the PPCA event, and restated the Liberal’s election promise to phase out coal-fired electricity by 2030. Julia Levin, senior climate and energy program manager at Environmental Defence, said although she was hoping for news on thermal coal exports, it is significant that Canada reiterates that promise at COP26.

Thermal coal, the type used to generate electricity, has been used in Canada longer than any other fossil fuel. Canada exports 15 to 18 million tonnes of thermal coal each year, an amount that has the potential to produce 33 to 40 million tonnes of carbon dioxide each year. That equates to the emissions from eight million passenger vehicles.

Steven Guilbeault in Glasgow restated the Liberal’s election promise to phase out coal-fired electricity by 2030, but some were hoping for an updating timeline on stopping thermal coal exports. #COP26 #cdnpoli #COP26xCNO

Guilbeault took the stage and emphasized that phasing out coal is essential and inevitable, and that notable progress has been achieved by the PPCA so far. The group announced 28 new members on Thursday for a total of 165.

“The phase-out is underway in Canada, we are committed to ending export of coal, thermal coal and phasing out conventional coal-fired electricity no later than 2030 while supporting coal workers and their communities through the transition to cleaner energy,” said Guilbeault.

“And Canada is pleased to help others plan their transition. We have our work cut out for us. It won't be easy, but it is necessary.”

“The 2030 date is the same date that almost every other country that's part of the [PPCA] has actually committed to. So it's aligned with both our international and our domestic commitments on coal,” he told Canada’s National Observer.

For Levin, who said phasing out thermal coal exports earlier is “low-hanging fruit,” the PPCA event was a missed opportunity for Canada to step up. Between now and 2030, millions of tonnes of thermal coal will be exported from the country.

“Not to take away from that really good work, but the elephant in the room in that conversation was on the mining and production side.

“... We have to move past coal for power, but we also have to talk about ending mining of thermal coal and ending supply, and that means countries like Canada, as co-founder of the PPCA, have to be first movers. 2030 is not a timeline of the first mover.”

With files from Morgan Sharp