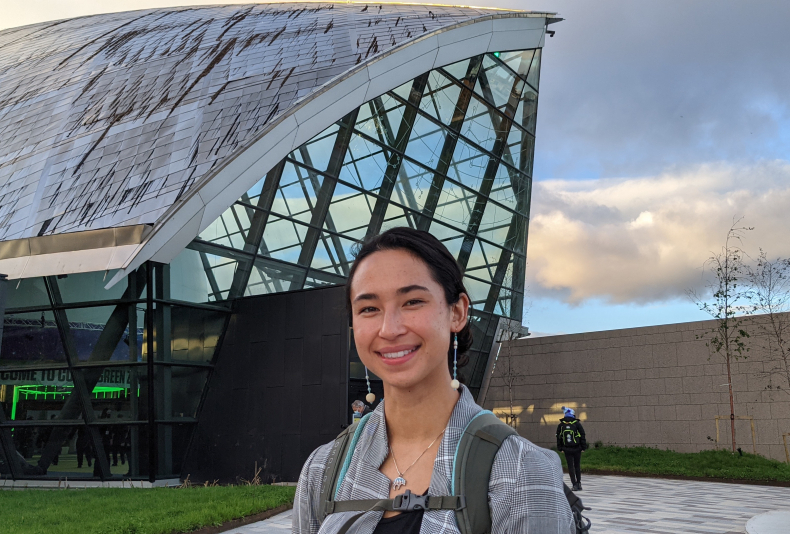 Addy Aklaasiaq Ahmasuk says it is best to address the problems of climate change at their roots, capitalism and colonialism. Photo by Morgan Sharp
Previous story
Next story

Young Inuit expect to play an active and meaningful role in developing climate resiliency across their Arctic region homeland, where climate change is having a profound negative impact on the environment and cultural knowledge of their people.

Brian Pottle, the 29-year-old president of Canada’s National Inuit Youth Council, said extended family living up north tell him they have six to eight weeks less time to traverse the land in winter than they did a decade or two ago. Shorter windows of sea ice formation have upset the patterns they relied on to know when it was safe to use snowmobiles.

“What’s happening now is historical knowledge is becoming obsolete, it’s becoming more risky to rely on that,” said Pottle, from Nunatsiavut in the north of Labrador. “And it’s terrible because along with the erosion of the physical landscape is the erosion of the applicability of ancient knowledge.”

Indigenous youth from the far north face a double climate hit; as young people they are likely to experience many more years of the global climate chaos already unfolding. The Arctic is warming at least twice as fast as the rest of the planet.

The relevance of the polar region to the scientific study of climate change has meant more researchers travelling to work in and around their communities, often only for a couple of weeks in the summer.

Victoria Qutuuq Buschman, a young wildlife biologist from far north Alaska who now lives in Greenland, says the communities themselves could be full-time researchers and that visitors should ensure they work in a meaningful and equitable way with residents of remote lands.

Buschman said it can be challenging for Indigenous students to study science, a system of thought somewhat in conflict with native ways of seeing the world. But she believes it is a worthwhile pursuit since once they join the field they can help improve and redefine it.

“A big part of changing those systems is continually to have these conversations about how we partner science and Indigenous knowledge,” she said. “We don’t like to say incorporate because it has this connotation that we’re going to take Indigenous knowledge and somehow crunch it down into numbers that can be fed into models and have some kind of scientific output, and that’s not how it works.”

The melting of pack ice due to global warming has recently opened up the Northwest Passage as a more viable trade route, with Canada and other countries jostling for advantage.

With more shipping comes a greater risk of accidents across the vast expanses, where minimal infrastructure means remote Inuit communities are often the closest people able to help.

“We are your first responders in the event of something that happens in the far north,” said Buschman.

She said melting permafrost has shifted the two-metre stilts her family home sits on and likely created an expiry date on the dwelling, while some 10 metres of soil erosion a year has created a need to recover the remains of ancestors at risk of being washed into the sea.

For Addy Aklaasiaq Ahmasuk from Nome in the west of Alaska, the immediate physical challenges of climate change in the north are less relevant than the underlying causes of that change.

“It’s not so much about erosion, tundra collapse or ice levels, but the signs of how we live in society that contribute to climate change,” she said, naming capitalism and colonialism as the primary culprits. “What’s happening to us was not done by us.”

She points out that this process is ongoing, noting the push for a port expansion in her hometown that will involve the U.S. military.

“We have the right to have peace in our homelands, peace in our marine environments,” she said, pointing out the emphasis on demilitarization in the United Nations Declaration on the Rights of Indigenous Peoples.

“Don’t develop for the sake of development.”

The young people were participating in a COP26 panel put on by the Inuit Circumpolar Council about building climate resilient infrastructure.

The ICC represents around 180,000 Inuit from Alaska, Canada, Greenland, and Chukotka (Russia), and just ahead of the conference they called on the global community to make the unprecedented and massive efforts needed to cap global temperature rise, including protecting the oceans and cryosphere through partnership with Inuit.

COP, short for Conference of the Parties, has brought the world together since 1995 to hammer out agreements to reduce global warming.

The talks gather policymakers, scientists, environmental activists, climate experts, and news media from the 197 member countries of the United Nations Framework Convention on Climate Change (UNFCCC), is this year taking place in Glasgow, Scotland, from Oct. 31 to Nov. 12.

The National Inuit Youth Council’s Pottle said he felt Inuit concerns were being heard at the conference.

“It’s clear that space is being made, as it should, for Inuit to be heard at these big venues at an international level because we are being disproportionately affected by climate change,” he said.

The moderator of the panel, Pottle’s immediate predecessor as head of the council Crystal Martin-Lapenskie, said part of that is thanks to the efforts of young Inuit themselves.

“We’re seeing a shift in the youth, not just taking back space, but making the space bigger for inclusion and for proper representation and to ensure that policies that are going to affect our future, that are affecting us now but are going to affect our kids and grandkids, we want to make sure they’re in a system that doesn't fail them like it has failed us,” she said.