By John Woodside | News | November 4th 2021
#52 of 99 articles from the Special Report: COP26: Uniting the World to Tackle Climate Change 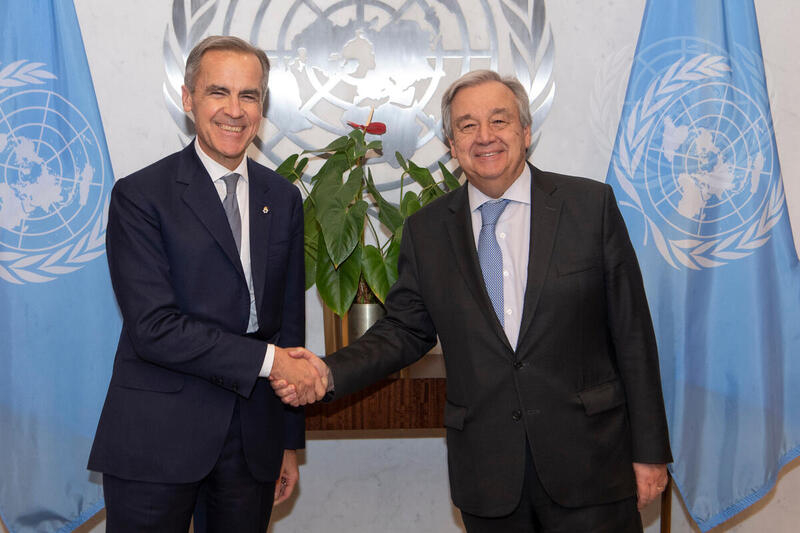 Mark Carney, left, when he was named special envoy to the UN on climate action and finance by Secretary-General António Guterres. Photo supplied by UN
Previous story
Next story

Taking centre stage at COP26 Wednesday was the Glasgow Financial Alliance for Net Zero (GFANZ), a gargantuan collection of private financial organizations that aims to make trillions of dollars available for a global transition to net-zero greenhouse gas emissions.

The alliance was launched earlier this year by Canadian Mark Carney, the former head of the Bank of Canada and the Bank of England and the current UN special envoy on climate action and finance.

It includes 450 firms, from 45 countries, representing assets worth over $130 trillion. The group includes banks, asset managers, insurers, and other financial organizations. As of late October, Royal Bank of Canada, Bank of Montreal, Toronto-Dominion Bank, Canadian Imperial Bank of Commerce, Scotiabank and the National Bank of Canada have all signed on. Vancity signed on when the alliance was first launched in April.

At its core, the stated goal of the alliance is to align capital with a net-zero world, or as Carney describes it, the new “plumbing” for the world’s financial system to ensure green investments flow.

"Up until today there was not enough money in the world to fund the transition, [and] this is a watershed,” Carney said during a panel discussion Monday, flanked by president of the World Bank David Malpass, International Monetary Fund managing director Kristalina Georgieva, and Kenyan cabinet secretary for Treasury Ukur Yatani.

Looking for projects to fund

“The money is here, but that money needs net-zero aligned projects,” Carney said, adding that he wants to see that become a focus of the G20 in the coming year.

Calculating the cost of a global transition to net-zero greenhouse gas emissions by 2050 is difficult. But BloombergNEF’s New Energy Outlook, said the cost is likely to be in the range of $92 trillion to $173 trillion. Other estimates peg the cost at around $4 trillion per year, working out to about $120 trillion from 2020 to 2050.

In a net-zero world, any greenhouse gases added to the atmosphere would be offset by the removal of the same amount of the gases that cause climate change, including carbon dioxide.

Carney spoke to the need for “blended finance,” that would see public dollars used to spark greater private sector investment. For the private sector, the returns could be enormous.

An international group of banks called the Glasgow Financial Alliance for Net Zero (GFANZ) says it has assets of $130 trillion to back a global transition to net-zero greenhouse gas emissions. Critics are skeptical. #COP26 #COP26xCNO

“Blended finance as Mark Carney and others spoke about this morning is about the merging of cash from multilateral development banks, [International Monetary Fund, World Bank] national development banks and private finance to support projects,” explained Richard Brooks, director of climate finance with Stand.earth.

“It can lead to public monies supporting private profits.”

Brooks called the GFANZ announcement closer to “smoke and mirrors” than real climate action, because it failed to mention fossil fuels.

“Many of these banks, pension funds and insurers are part of the problem and reluctant, based on the new deals they signed with fossil fuel companies, to change their ways and become part of the solution,” he said.

“I'd much rather see $50 trillion mobilized to phase out financing of coal, oil and gas starting in 2021, than a much bigger number with weaker commitments to address the elephant in the room," Brooks said.

International climate diplomacy manager with Climate Action Network Canada, Eddy Pérez, told Canada’s National Observer that GFANZ doesn't necessarily represent the financial system at large, and without rules to prevent members from financing fossil fuel projects, the alliance is limited in how effective it could be to address climate change.

“What needs to be assessed is how will this commitment help deliver emission cuts within this decade,” he said.

The goal is “not about net-zero [by 2050], it’s actually about 1.5 C and the integrity to do it as soon as possible,” he added, in recognition that without immediate and steep emission reductions, the Paris Agreement’s goal of holding global warming to 1.5 C will be out of reach.

For Canada, which has committed $5.3 billion over five years in international climate financing, Environment and Climate Change spokesperson Samantha Bayard said the government believes public finance will not be enough to address the scale of the problem.

“The private sector plays a key role in reaching the investment levels required to shift the world towards a low-carbon and climate-resilient path,” she said.

“This is why a key priority of Canada’s climate finance support is to mobilize private sector investors to drive the kinds of investments Canada needs to achieve the Paris commitments. In doing so, Canada is taking an innovative approach of partnering with multilateral development banks (MDBs) to leverage private sector financing by removing barriers to private investment in developing countries.”

NDP Leader Jagmeet Singh said he is “deeply concerned” by climate financing strategies that introduce a profit motive from the private sector into the supposed solution.

“Anytime you've got a profit motive, the priorities aren't 'is it as accessible as possible? Does it provide the best access to as many people as possible? Is it universal?’ The goal is does it make me money? Is it a return on my investment?” he said.

Singh pointed to the Canada Infrastructure Bank set up in 2017, with a mandate to invest billions on infrastructure to attract private capital. The problem with these types of public-private partnerships is they are essentially public subsidies for private profit, that end up costing the public more, Singh said.

“Publicly funded projects are far superior, the benefits flow to the people, and we’re not just siphoning public resources into private pockets which is what these arrangements do,” he said.

“How is [GFANZ] a good announcement? You're going to have trillions of dollars of private money going into public infrastructure that people need.”

Singh used public transit infrastructure as an example, saying if the goal is to fight the climate crisis, “We want as many people as possible using public transit.”

“If public transit is privatized, the goal of the private entities is to make as much money off of it, not to make sure as many people as possible use it,” Singh said. “That’s the wrong motive, the motive should be as many people use it as possible so that it reduces the reliance on cars, and we reduce our emissions.”

In a recent interview with Planet B: Everything Must Change, former Greek finance minister and one of the founding members of Progressive International, Yanis Varoufakis, said the way to pull off a transition to a climate-safe future is with a global green new deal modelled on the New Deal implemented in the U.S. during the Great Depression.

He said that while many progressives want to tax the rich to pay for a green transition, there isn’t enough time to raise enough money from taxation to address climate breakdown.

“This is why I think Roosevelt’s [NewDeal] idea is so important. We need to use public financial instruments to mobilize existing resources, existing liquidity, existing money immediately,” Varoufakis said.

Thank you for this analysis.

Thank you for this analysis.