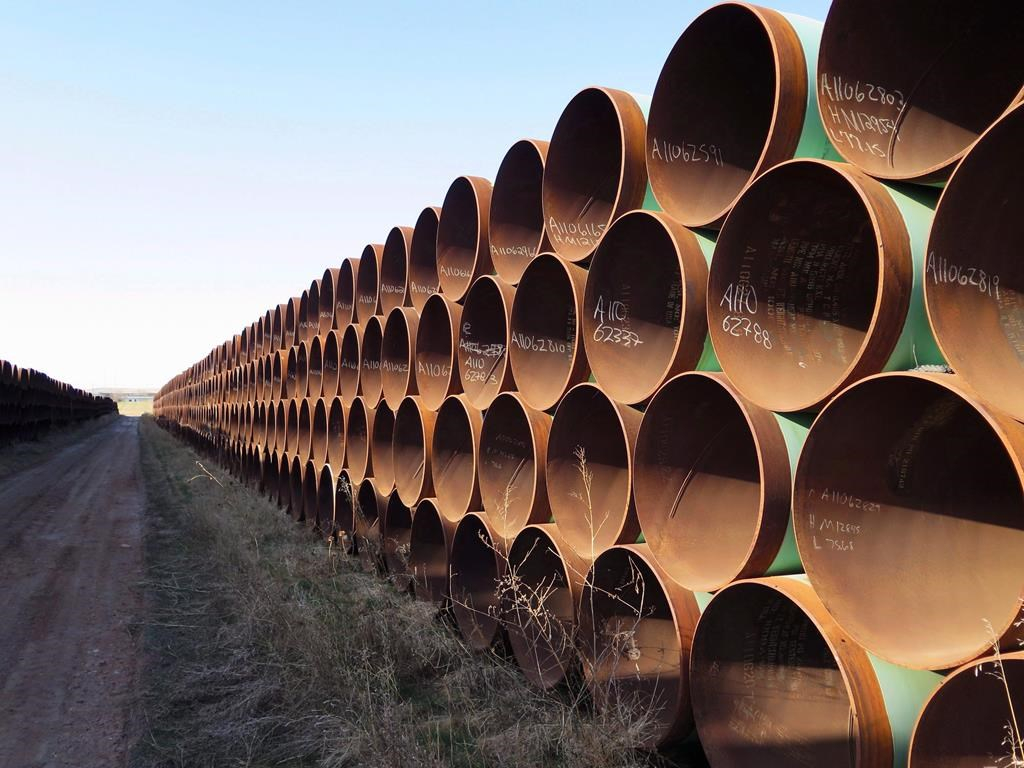 Pipes intended for construction of the Keystone XL pipeline are shown in Gascoyne, N.D. on April 22, 2015. TC Energy Corp. reported a third-quarter profit of $779 million, down from $904 million a year ago. File photo by The Canadian Press/Alex Panetta
Previous story
Next story

TC Energy Corp. has committed to providing up to $3.3-billion in additional temporary bridge financing to cover cost overruns related to the Coastal GasLink pipeline project.

The Calgary-based company said Friday it is still involved in a dispute with LNG Canada over projected cost increases and their potential affects on schedule. But TC Energy said construction on the project continues, and is now more than 50 per cent complete.

"We can't, of course, discuss the details of any discussions on cost and schedule and the issues between us because they're confidential," said Tracy Robinson, executive vice-president with TC Energy and president of Coastal GasLink, on a conference call with analysts. "But what I can say is that we're very hopeful that ultimately, we're going to reach an agreement between us on those issues."

TC Energy was selected by LNG Canada in 2011 to design, build, own and operate Coastal Gaslink. The 670-kilometre pipeline is intended to move 2.1 billion cubic feet per day (bcf/d) of natural gas to LNG Canada's terminal, where it will be converted into a liquefied state for export to global markets.

Preliminary construction began in 2019, with an anticipated completion date of 2023. However, TC Energy indicated earlier this year that permit delays and the impacts of COVID-19 — including a British Columbia provincial health order that temporarily halted construction — have led to "significantly" increased cost projections as well as a potentially delayed project completion.

TC Energy said Friday that it has already provided a short-term credit facility to the project, on which $840 million was drawn on Sept. 30, 2021. In October, this amount was fully repaid and further draws were made, which resulted in an outstanding balance of $175-million as of Oct. 29. As a further interim measure, the company said, it has committed to providing additional temporary financing if necessary of up to $3.3-billion.

The exact amount of additional financing that will be required will be dependent on an agreement with LNG Canada, though TC Energy emphasized that cost increases will ultimately be included in the final pipeline tolls, once Coastal GasLink is operational.

"I think it's important to note, though, if that ($3.3 billion) were required that we would earn a return on that investment," said Joel Hunter, TC Energy's chief financial officer. "It would be viewed as temporary."

In an emailed statement, LNG Canada director of corporate affairs Denita McKnight said the company remains concerned with TC Energy's proposed cost increases and schedule delays, which she said are well beyond what LNG Canada agreed to when it made its final investment decision in 2018.

"We are working toward a commercial solution with respect to how increased costs are addressed moving forward. We have not seen evidence that supports the forecasted cost increases," McKnight said.

#TCEnergy Corp. commits to up to $3.3B to cover #CoastalGasLink cost increases.

LNG Canada remains committed to ensuring the pipeline is ready for its first LNG cargo by the "middle of this decade," McKnight said.

On Friday, TC Energy reported a third-quarter profit of $779 million, down from $904 million a year ago.

Chief executive Francois Poirier said the company is in the midst of an "unprecedented" energy transition opportunity, and has a number of clean energy projects in the pipeline including partnerships with Pembina Pipeline Corporation to jointly develop a carbon transportation and sequestration system in Alberta, and Irving Oil to jointly develop clean energy projects in Eastern Canada.

It has also formed a partnership with electric vehicle manufacturer Nikola Corporation to co-develop large-scale hydrogen production facilities in the United States and Canada.

“We expect to sanction approximately $7 billion of new projects in 2021," Poirier said in a news release.