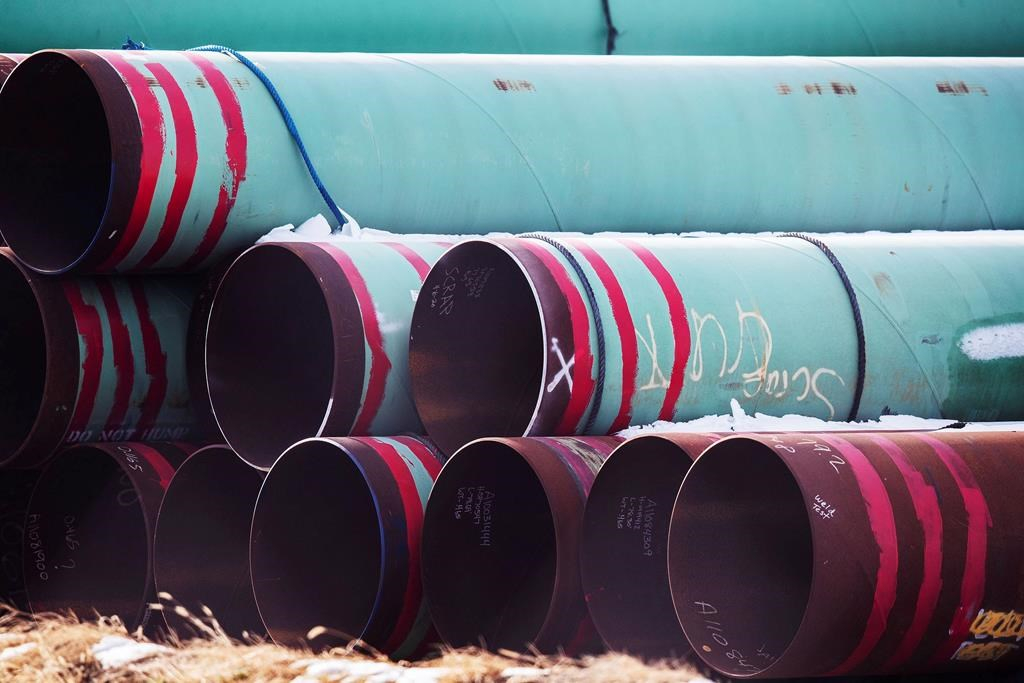 Pipes to be used for the Keystone XL pipeline are stored in a field near Dorchester, Neb., in this Dec. 18, 2020 photo. THE CANADIAN PRESS/AP-Chris Machian /Omaha World-Herald via AP
Previous story
Next story

CALGARY — Another Canadian oil pipeline has bitten the dust after TC Energy Corp. said it was walking away from the Keystone XL pipeline project, ending a decade-plus battle that pitted the energy industry against environmentalists as oilsands producers sought to export Canadian crude.

Construction on the pipeline was suspended earlier this year after newly elected U.S. President Joe Biden fulfilled a campaign promise to cancel its presidential permit in January.

TC Energy last month took a $2.2-billion writedown on the cancelled project, which pushed the company to a loss in its most recent quarterly earnings.

It approved spending US$8 billion in March 2020 to complete the pipeline after the Alberta government agreed to take a $1.5-billion equity stake in Keystone and provide a $6-billion loan guarantee to ensure work started immediately.

The Calgary-based company on Wednesday confirmed its decision to terminate the pipeline after conducting a comprehensive review of its options and consulting with the Alberta government.

The government said its final costs are expected to be $1.3 billion.

“We remain disappointed and frustrated with the circumstances surrounding the Keystone XL project," Alberta Premier Jason Kenney said in a statement, "including the cancellation of the presidential permit for the pipeline’s border crossing."

Kenney, who in January called the permit revocation a "gut punch," said his province has an important, continued role in the North American energy system.

Keystone's demise follows cancellations of Northern Gateway and Enbridge Inc.'s Energy East and a delay in Trans Mountain, which the Canadian government bought in 2019 for $4.5 billion from Kinder Morgan.

Alberta will work with U.S. partners to meet the country's energy demands "through the responsible development and transportation of our resources," Kenney said.

The Alberta government said Wednesday its final costs on #KeystoneXL are expected to be $1.3 billion. #ableg

The government said the pipeline's completion would have led to higher prices and increase volumes of crude production, generating at least $30 billion in increased royalties over 20 years.

"Through the process, we developed meaningful Indigenous equity opportunities and a first-of-its-kind, industry-leading plan to operate the pipeline with net-zero emissions throughout its lifecycle," said TC Energy president and chief executive officer François Poirier in a statement.

"We will continue to identify opportunities to apply this level of ingenuity across our business going forward, including our current evaluation of the potential to power existing U.S. assets with renewable energy.

The 1,947-kilometre pipeline was designed to carry 830,000 barrels a day of crude oil from Hardisty, Alta., to Steele City, Neb. From there it would connect with the company's existing facilities to reach the U.S. Gulf Coast — one of the world's biggest oil refining hubs.

Some 200 kilometres of pipeline have already been laid, including across the Canada-U.S. border. The Keystone XL project was first approved by the National Energy Board in 2007.

“This victory is thanks to Indigenous land defenders who fought the Keystone XL pipeline for over a decade," stated Clayton Thomas Muller, Canada senior campaigns specialist at 350.org.

"With Keystone XL cancelled, it’s time to turn our attention to the Indigenous-led resistance to the Line 3 and the Trans Mountain tar sands pipelines.”

The organization named after the safe concentration of carbon dioxide in the atmosphere said its efforts were never about just one pipeline.

Jared Margolis of the Arizona-based Center for Biological Diversity called the pipeline's termination a landmark moment in the fight against the climate crisis.

“We need to keep moving away from dirty, dangerous pipelines that lock us into an unsustainable future," he said in a statement. "Good riddance to Keystone XL.”

While some Indigenous groups opposed the pipeline, a group participated in oil and gas development as a solution to poverty on reserves.

Dale Swampy, president of the National Coalition of Chiefs had complained in January that its cancellation would mean fewer jobs for Indigenous people in constructing the people and supplying goods and services for it.

— By Ross Marowits in Toronto