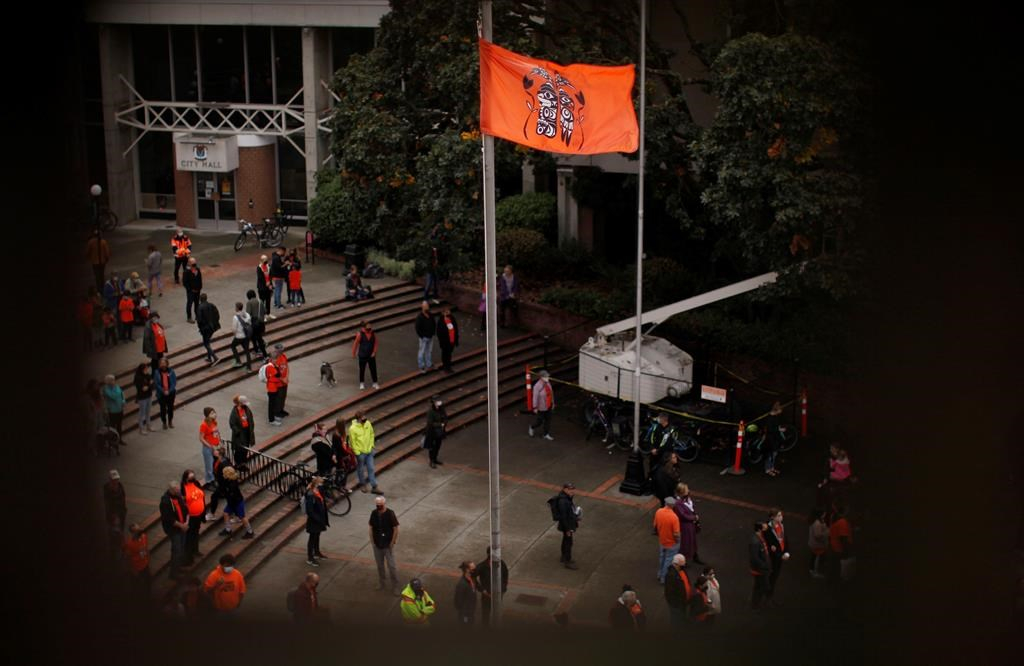 The national flag is set to be hoisted Sunday at federal buildings across Canada and the Peace Tower in Ottawa following the longest period in the country's history that it has flown at half-mast.

The federal government announced Friday its decision to raise the flag after talks with Indigenous groups. It was lowered in May in honour of Indigenous children who suffered and died at residential schools.

The flag will be hoisted at sunset on Sunday in time for Remembrance Day next week, when it is traditionally lowered to honour Canada's veterans and war dead.

It will also be lowered at sunrise on Monday to mark Indigenous Veterans Day and raised again that evening at sunset.

A joint statement from Canadian Heritage, Crown-Indigenous Relations and Northern Affairs Canada Friday said the flags have "remained at half-mast in memory of the Indigenous children who were sent to residential schools, for those who never returned home and in honour of the families whose lives were forever changed."

"As the paramount symbol of our nation, the act of flying the national flag of Canada at half-mast for the longest period of time in Canada's history speaks to the extraordinary sense of loss."

It added that raising the flag "will allow us to honour and remember important moments in Canada’s history."

In the future, the flag will be lowered to half-mast to mark the National Day for Truth and Reconciliation every Sept. 30, the statement said.

The government said it would also fly the orange National Centre for Truth and Reconciliation’s survivors' flag on the parliamentary precinct.

Canadian flag to be raised on Sunday, November 7, 2021, on federal buildings, in time for #RemembranceDay. #CDNPoli #ResidentialSchools

It is preparing to build a national monument in Ottawa to honour residential school survivors and "all the children who never returned home."

The Assembly of First Nations said earlier Friday, before the government made its announcement, that it wants an orange "every child matters" flag to be raised on federal buildings alongside the national flag.

National Chief RoseAnne Archibald said the orange flag should fly alongside the Canadian flag until all children who died at residential schools are recovered, named and returned to their homelands — physically or symbolically — with proper ceremony.

The assembly's executive passed a motion on Thursday calling for the flag to be raised on all federal buildings on Sunday alongside the "every child matters" flag.

In a statement, the assembly said it recognized the need to honour veterans by lowering the flag on Nov. 11. It also supported the flag being lowered on Monday to recognize Indigenous Veterans Day.

Speaking after the government announcement, Archibald said she was glad that the survivors' flag, which is also orange, would fly on Parliament Hill. She said the assembly would hold discussions about whether to fly it at half-mast or full-mast after consulting its knowledge-keepers.

"We are happy there will be a place for the orange flag on Parliament Hill and so that is certainly a positive step," she said.

She also welcomed the government's decision to lower the national flag on Indigenous Veterans Day, which she said was proposed by the assembly.

She warned that the assembly would be holding the government to its promise to take further action on truth and reconciliation. She said she wanted to see "a report card annually" measuring progress.

Grand Chief Stewart Phillip, president of the Union of B.C. Chiefs, said he supported raising the orange flag alongside the national flag, as proposed by the assembly.

Cowessess First Nation Chief Cadmus Delorme said "with the flags down, it reminded us how real this was."

"When Kamloops and the Cowessess told their stories, this country was in shock and disbelief," he said. "We inherited this and if we don't address it, we are telling our children, and children's children, to deal with this. We must take aggressive action."

"Moving forward we must ensure that all Indigenous voices are heard on this issue and that First Nations, Inuit, and Métis voices are all contributing to the healing process," she said.

But Conservative Leader Erin O'Toole said "symbolic acts are not a substitute for concrete action on reconciliation."

“Canada’s flag is our most important national symbol, which represents not only our dream for a better country, but our past. That’s why Canada’s Conservatives have been calling for the flag to be raised today, with the start of Remembrance Week," O'Toole said in a statement.

“It was appropriate to lower the flag to recognize our tragic history of residential schools and the unspeakable trauma it has caused for generations of Indigenous Peoples in Canada. What was not appropriate was Justin Trudeau’s decision to lower the flag without some form of protocol or plan to restore Canada’s flag back to its rightful place."

The flag will be lowered at the National War Memorial on Nov. 11 by the Royal Canadian Legion, which is in charge of the site on Remembrance Day. It has recommended that legion branches throughout Canada also lower the flag to honour the country's war dead.

It said legion branches across Canada had the choice to continue flying their flags at half-mast "in tribute and remembrance."

The legion said "our First Nations friends" will "always be in our hearts."