By Kairn Carrington | Opinion | November 8th 2021
#72 of 99 articles from the Special Report: COP26: Uniting the World to Tackle Climate Change 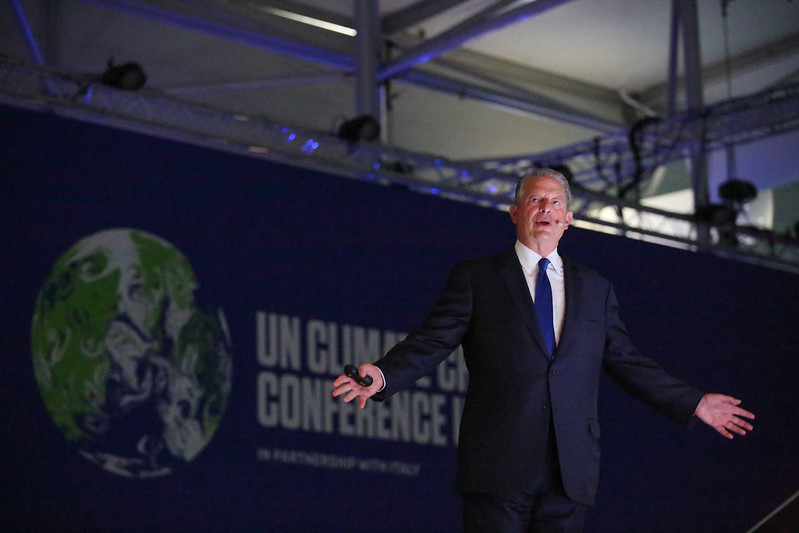 Heading into our second week of the United Nations climate summit in Glasgow, I am, oddly, ebullient.

Every corner of the Scottish city seems lit up with conversations about climate change.

After listening to former U.S. vice-president Al Gore make his case last Friday for the extreme urgency of the moment in the gigantic UN assembly room, I made my way out to the street. Passing three layers of security barricades and rows and rows of yellow-vested police, I found myself in a crowd of tens of thousands attending the massive youth-led protest outside.

Squeezed shoulder to shoulder, COVID be damned, the crowd in the square was vibrating with intensity. They listened intently to young leaders from Nigeria and the Amazon give testimony to the devastation they have witnessed in their homelands. A young woman from Mexico read aloud the names of a dozen organizers who have been killed because of their work for change asking the crowd to raise their fists and yell “Justice” after each one.

The message was clear: climate change kills in many ways.

Having heard as much as I felt I could take in, I started to climb down from the platform of the statue that I, and about 50 other people, had climbed up to see over the massive crowd. The woman in front of me stopped me, “Oh don’t go, she is going to be on soon.” There was no need to say her name. Soon I heard people yelling, “She is coming out of the white van,” and “I can see her face!” I felt like I had travelled back in time and the Beatles were about to emerge.

When tiny Greta Thunberg finally took the stage, she spoke with the bluntness and sincerity that we have come to know her for. She stressed the incredible urgency of the moment and encouraged us all to refuse to accept any more “blah, blah, blah.” She was brilliant as she spoke of her anger, this time directing it at the leaders inside COP26 — short for the 26th conference of parties — demanding that world leaders at the meeting do better. Finally, she declared that the COP was already a failure.

Opinion: The amazing thing is that if cut to the core message, Al Gore and Greta Thunberg are pretty much saying the same thing: The hour is late and we are very far from where we need to be, writes Kairn Carrington. #COP26 #COP26xCNO

The amazing thing is that if you strip away the settings and the specific language, cutting to the core message, Al and Greta are pretty much saying the same thing. The hour is late, danger is everywhere, and we are very far from where we need to be.

The night before I stood beside American environmentalist Bill McKibben in a tiny third floor bar where he told a room full of activists, “We've almost got them. We've almost built up enough power to make real change. We’re not there yet, but we are close.”

We are at a tipping point.

While Gore warned us of the nine ecological tipping points we are approaching, any one of which could trigger cataclysmic consequences, we may be equally close to the socio-political tipping point where the world finally understands the existential imperative of the moment and starts to act accordingly. We are indeed in a race. What will happen first? Will it be the melting of ice sheets or will it be the point where continuing to burn fossil fuels becomes unsanctionable?

I am beginning to feel the tiniest bit of relief, that maybe, just maybe, we are going to beat this thing.

Listening to the guy from Italy explain the incredible potential of green hydrogen was inspiring. When I somehow ended up in a castle at a dinner with a group of writers and Hollywood film producers discussing the narratives we need to spur real change, I could see that they truly understood the severity and urgency of the crisis and were committed to bring their resources to bear on the question.

At the same time there are stories of heartbreak everywhere. In a workshop entitled Legal Solutions to protect the future of life on Earth: Criminalizing Ecocide and expanding the Rights of Nature, I watched a film of a group of Masai youth performing a dance about a little boy who drowned in a flash flood on the river they live near.

On the street corner on the way home last night, I stopped to hear an incredibly impassioned woman from Mali talking to a crowd of a few hundred people about her determination to make the rich countries pay for the damages their climate pollution has done to her home.

Effects felt around the globe

As I write this, there are hundreds if not thousands of conversations going on simultaneously. Bureaucrats trying to find agreement on how to bring down methane emissions as their political leaders promised, activists strategizing about how to end corporate greenwashing and Indigenous people offering their traditional ecological knowledge to show us the way forward.

No matter who is speaking, on the street, in the grassroots organized workshops, in the private dining rooms or in the UN plenary sessions, they are all saying the same thing: This crisis threatens our survival and we need radical action now.

Finally, we are having the conversations we need to have, with people engaged with all levels of society from all across the globe.

COP wasn't meant to solve everything

I can’t say that I agree with Greta, however, that this COP is a failure. It won’t solve everything by itself, it was never going to. This struggle will continue for decades and what I have witnessed here gives me more hope than I have had in years.

My entire family is from Glasgow. When I arrived my 94-year-old Auntie Irene was playing I belong to Glasgow through her Alexa speaker. She gave me a giant hug, “Welcome home, hen.”

There is an expression Glaswegians use to describe the difficulty of swinging a feline by the tail in a space that is crowded with something, as in “You cannae swing a cat in this town without hitting a wee pub”.

Well, let me tell you, at this global climate confab, you cannot swing a cat without hitting a person that is on fire with passion, or grief-fueled determination. Each and every one of them committed to do whatever is theirs to do to get us to a safe and livable future by wrestling the beast of climate change to the ground. This moment is alive with possibility.

Thank you for this perspective and reporting on COP 26.