By David Tindall | Opinion | November 9th 2021
#78 of 99 articles from the Special Report: COP26: Uniting the World to Tackle Climate Change 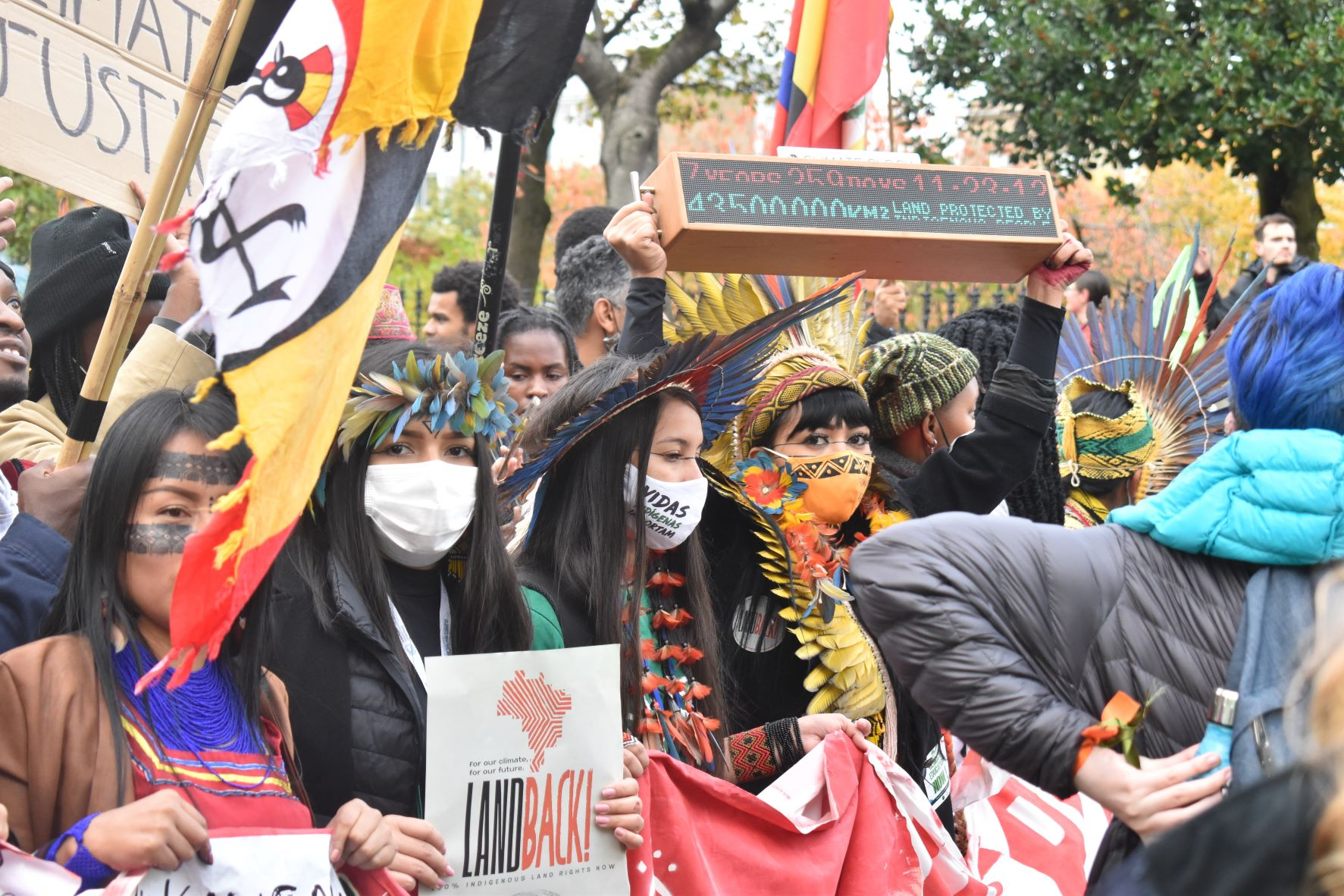 A youth-focused climate strike march and rally drew at least 25,000 people to the streets of Glasgow on Nov. 5. Hundreds of events in other cities were also held that day. Fridays for Future states the strikes occurred in 81 countries, spread across 379 cities and involved more than 270,000 participants. Greta Thunberg, who is now 18 and arguably the highest-profile climate activist in the world, “headlined” the Glasgow event.

In Glasgow, participants carried signs that read: “We want to die of old age”; “Leave No One Behind, Climate Justice, Hear Our Voices!”; “System Change NOT Climate Change”; “Losing Nemo”; “There’s no economy on a dead planet”; “There is no Planet B”; and of course, “Blah, Blah, Blah”.

The following day, at the Global Day of Action march and rally in Glasgow (attended by 250,000 people, according to organizers), there was also a very strong youth contingent, and many of the rally speakers were global youth, mostly Indigenous and from developing countries. One stage participant was 20-year-old Ta'Kaiya Blaney from the Tla A'min Nation in British Columbia, who has been an environmental activist since she was a pre-teen.

Young people are one of the loudest groups in climate change politics. Questions arise from this, including: Why are youth getting mobilized about climate change? What role are they playing? Isn’t this just a fad?

Climate justice is a useful frame to draw on when thinking about the role of youth in climate politics. Youth have contributed much less to climate change, but will disproportionately bear the brunt of its effects. This is sometimes referred to as an issue of intergenerational inequity. There is also an intersection between the economic development and age structures of nations: developing countries in the Global South tend to have disproportionately larger youth populations than countries in the Global North. Thus, some youth will be doubly disadvantaged by climate change.

Former U.S. president Barack Obama gave a speech to COP26 on Nov. 9. He noted that: "The most important energy in this movement is coming from young people. And the reason is simple — they have more stake in this fight than anyone else." He urged youth to channel their anxiety and anger to help change the system and urged them to become engaged in politics because that is how change happens.

Youth who are involved in the climate movement tend to be well-informed about the issues, more so than many adult cohorts. Climate change is salient to youth; they have had greater educational opportunities to learn about it at school, and are more immersed in media information about climate change. Yet, while youth have the most to lose from climate change, most are too young to vote yet. Conversely, it is generally older, less-knowledgeable cohorts who are primarily responsible for electing governments with insufficient climate ambition. And they are failing to adequately deal with the climate crisis.

Climate movement groups vary on several dimensions: some are locally focused, some are regionally oriented, some are national, others international. Some groups focus on particular topics (endangered species, water, forests), and some are more general. Some favour co-operative engagements with governments and corporations, while others primarily take a protest stance. This latter distinction is sometimes described as the difference between insider and outside strategies.

I spoke in Glasgow with a veteran of past COP conferences, and she said youth have had significantly more involvement in COP26 than in earlier conferences. There are a number of youth-oriented sessions, and in fact, the dedicated theme of the COP26 Presidency Program on Nov. 5 was “Youth and Public Empowerment.” On this note, UN secretary general António Guterres invoked Thunberg in his opening remarks. Nevertheless, the main role played by youth in climate change politics is the outsider protest role.

A frequent question raised about youth activism is: What is the role of adults in such movements? Also, is it appropriate for youth to be involved in protests about contentious topics? In thinking about these issues, it is useful to consider what we mean by the term “youth.” There are at least three categories: pre-teens, teenagers, and late teenagers and twenty-somethings. All three categories participated in the recent Glasgow climate strike.

Certainly the participation of younger children in activist events is primarily mediated by adults, their parents, and teachers. Some question whether this type of activity is appropriate for children. Some obvious responses include: Why is protecting the environment and saving the planet an inappropriate activity for children?

Teenagers are somewhat more autonomous as environmental activists, and usually comprise the majority of climate strike participants. (Though, not necessarily at the Glasgow event.) Thunberg started her climate strikes in 2018 when she was 15. Though it should be noted Thunberg did not grow up in a political vacuum — her mother, Sara Magdalena Ernman, has had some engagement in environmentalism. Nevertheless, Greta seems to be largely self-directed.

Concerning older, university-aged youth, they have a long history of contributions to activism and social movements. For example, university-based activists played significant roles in the civil rights movement and the anti-Vietnam War movement in the 1960s in the U.S., in the anti-apartheid movement in the 1980s, and currently in the global fossil fuel divestment movement.

Another question that is raised is: Isn’t this just a phase of life, and won’t youth activists just grow up and become part of the status quo? There is a stereotype of youth activists growing up to become BMW owners and stockbrokers. While this may happen on the margins of social movements, research has found this view is exaggerated.

Researchers such as Doug McAdam have found “core” activists (those who are highly committed and engaged) tend to display a great deal of continuity over time. What tends to happen is that they sometimes move from one movement (environmental) to another (human rights), or from involvement in a social movement organization to involvement in another type of organization, such as a political party.

Sometimes activists go on to become politicians. Take, for example, Steven Guilbeault, who was an environmental activist in his 20s and once scaled the CN Tower in Toronto as part of a Greenpeace protest. Today he is Canada’s environment and climate change minister. In his talk, Obama mentioned another example — a former teen activist he’d previously met who is now a COP26 negotiator for his respective country.

While this is not the only criteria for judging movement success, in terms of participation numbers, the youth climate movement is one of the most successful social movements of recent decades. Climate change is not going to be stopped or reversed overnight. Fortunately, based on these trends, the climate movement is unlikely to disappear any time soon, either.

I don't follow her every action, so have to check: has she stuck with her discipline to never fly? She crossed the Atlantic once, very celebrated sailing journey, forget how she got back, or if never returned, because it's such a chore. Oil analyst for the Calgary Herald, Peter Tertzakian, did a great piece on how she should be welcomed by the "Right" because she highlights just how hard it is to really do without oil, how few follow her example.

I have to say, I'm just embarrassed by those who *flew* to Glasgow so they could get a media platform to demonstrate for their own causes, as good a cause as conservation, and MMIW, might be. The round-trip is a full tonne of carbon emitted. Very local demonstrations where everybody already lived would have offered the same message, given local media a story, and not have been burdened with an almost-comical level of climate-emissions hypocrisy.

There are so many such in Glasgow, one suspects a whole extra 737 flight had to be scheduled. If the dozens of them had chipped in their $1000 airfare each, to hire a boat, a Thunberg-like message could have been delivered.