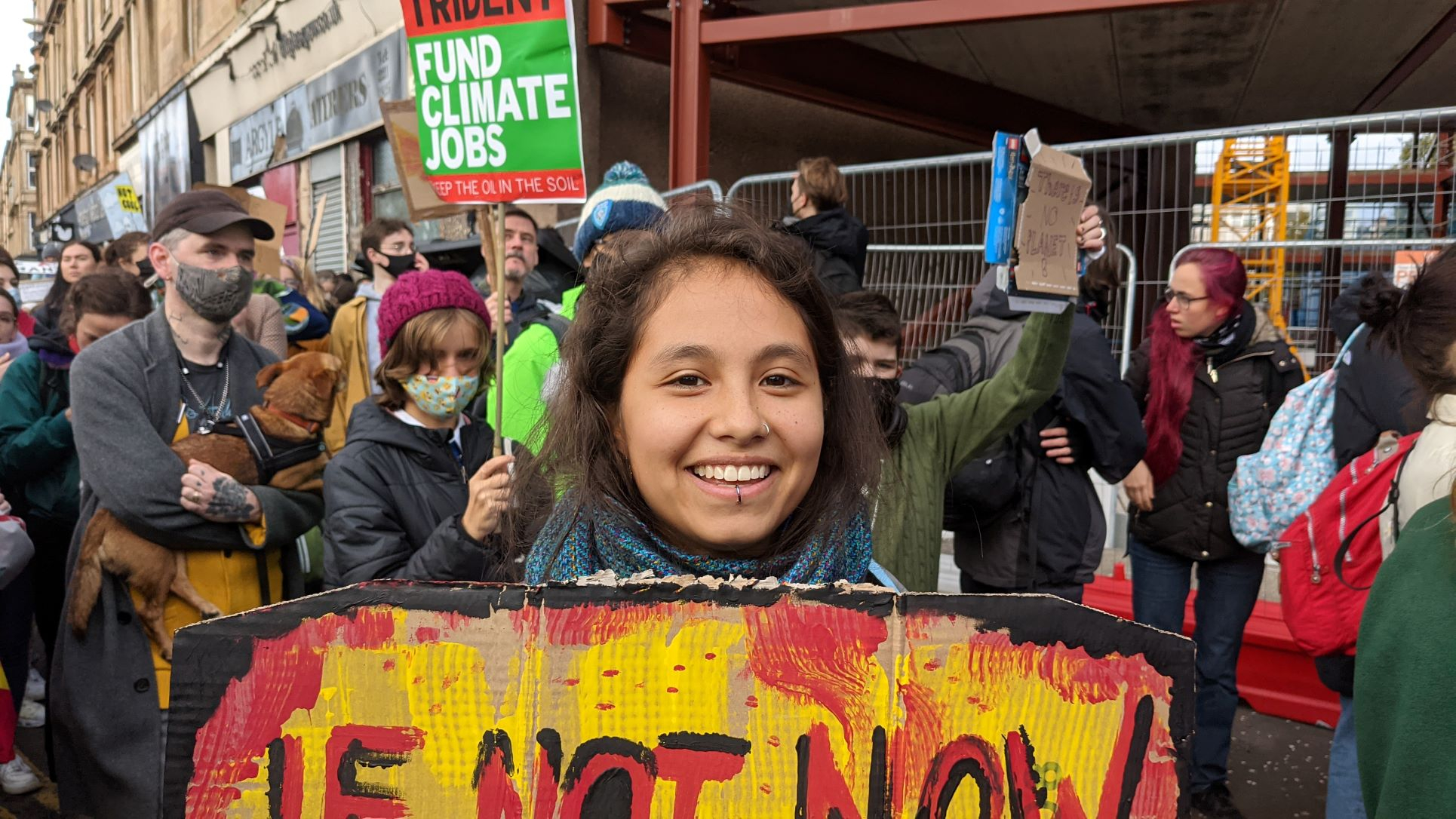 Paccha Turner Chuji, who is from Ecuador and lives in England, says she joined the protest to amplify Indigenous voices. Photo by Morgan Sharp / Canada's National Observer
Previous story
Next story

A tone of indignation ran through demonstrators in the crowd that snaked through the Scottish city hosting the two-week climate conference, but that was entwined with a collective sense of possibility, too.

“It's really upsetting to see them make promises about fixing the planet and then they just go and they build something that is literally doing the opposite of that," said Jenny Gardner, a 16-year-old from nearby Loch Lomond who came with several friends, of the global leaders assembled about a mile away.

"They say that they care, but they don't care," she said. "I think that's really infuriating and this is about rebelling against their empty words."

Swedish climate activist Greta Thunberg chose Fridays as the day to regularly skip school to protest climate inaction back in 2018. The movement created in her wake, Fridays for Future, continues to draw supporters demanding urgent action to slow global warming. (A global day of action is planned for Saturday.)

The stage set up at the march's end in the central George Square featured a string of Indigenous speakers from around the world, who detailed the disproportionate impact extractive industries funded by industrialized nations have on their lives.

They included a climate activist from West Papua who said his father was assassinated by the Indonesian military for speaking out about the destruction of their South Pacific homeland, part of the island of New Guinea, the world’s third-largest carbon sink.

“This is what climate justice is about,” the man said. “The climate crisis happens on Indigenous lands, and it is still happening there.”

“But we are not climate victims,” he said to cheers from the crowd. “We are climate leaders. We know how to protect pristine land.”

The crowd and the speakers also represented labour, socialists and even medical students who pointed out the negative health impacts of a warming planet.

Paccha Turner Chuji, a 21-year-old from Ecuador who lives in England, said she joined the march to support the international Indigenous movement, which is increasingly connected to climate justice movements

“My aim is to support the amplification of Indigenous people's across the world because their voice and their knowledge is essential for the radical shift that the world needs to undergo," she said.

Thunberg, who took the stage at the end of the event, said the people and regions most affected by the climate emergency remained on the outside of the policy response.

"This is now a Global North greenwash festival," she said of the UN event. "A two-week long celebration of business as usual and blah blah blah."