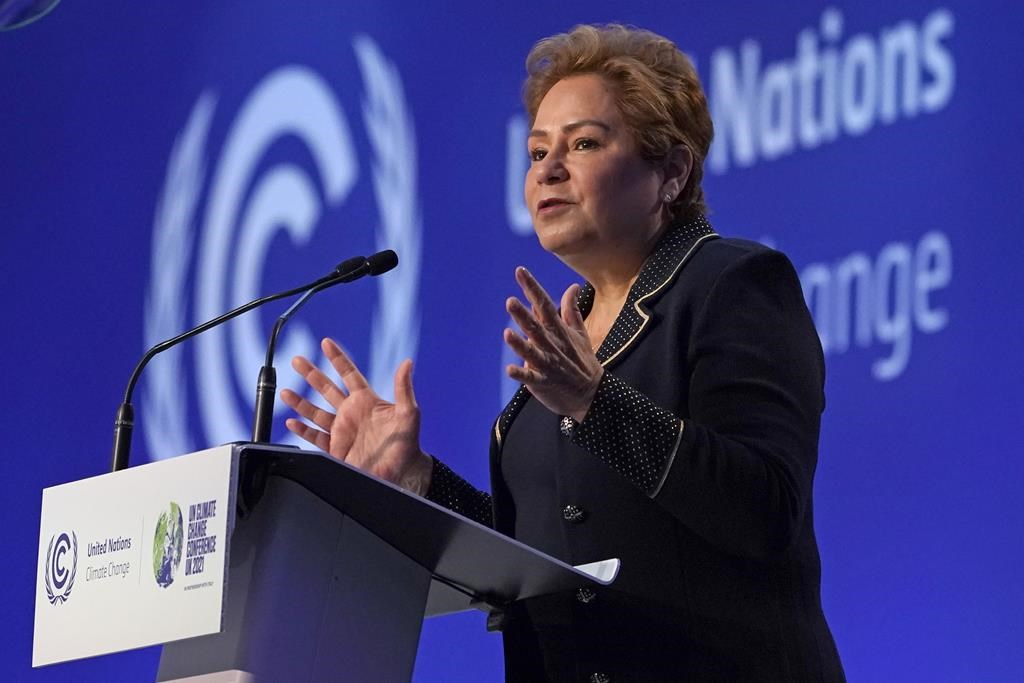 It was no deal or a lump of coal at Glasgow climate talks and for Patricia Espinosa, the United Nations’ climate secretary, there was no choice.

“No deal was the worst possible result there. Nobody wins,” Espinosa said in an interview with The Associated Press Sunday, about 15 hours after nearly 200 nations agreed on what is now being called the Glasgow Climate Pact.

The world got a climate deal that outside experts said showed progress, but not success. It didn’t achieve any of the three U.N. goals: Pledges that would cut world carbon dioxide emissions by about half, $100 billion in yearly climate aid from rich countries to poor ones and half that money going to help the developing world adapt to the harms of a warming world.

Even more disappointing, a big world economy — India — which is already seeing droughts and extreme heat from global warming was the nation that watered down the final Glasgow deal.

“I am satisfied,” Espinosa said. “I think this is a very positive result in the sense that it gives us a very clear guidance on what we need to do in the coming years.”

One climate deal itself won't do the trick to limit warming to 1.5 degrees Celsius (2.7 degrees Fahrenheit) since pre-industrial times, the U.N.'s overarching goal, Espinosa said. But she said it sets the stage, creating a carbon market, allowing more money to flow from rich to poor nations, even if poor nations were unsatisfied and said it isn't enough.

“It doesn’t fully satisfy everyone,” she said. “But it brings us forward. It’s a good compromise.”

Compromise was essential when a last minute proposal almost killed her possible deal.

India, the third-largest carbon-polluting country whose development is coal-centric said it couldn’t live with historic language calling for a phase out of coal and an end to fossil fuel subsidies. For many of the countries, especially small island nations facing threats from rising seas, ending coal was key in reducing greenhouse gas emissions and trying to keep warming to a level that would allow their nations to live. Many countries were telling Espinosa and conference president Alok Sharma that the coal phase-out language “has to be in there.”

But no deal or a deal without India was unacceptable.

A series of small negotiations erupted. Many on camera, which Espinosa said was important for the world. Small island nations got consulted. They didn’t like it, but they like Espinosa, and U.S. climate envoy John Kerry said had no choice. India would have preferred no coal language at all, Espinosa said. Instead India proposed “phased out” become “phase down” and country after country said they hated the idea, but accepted it.

“I think it’s a clear example of a compromise,” Espinosa said.

“Some people see it like this, but I would say this is really the essence of multilateral negotiation,” the veteran Mexican diplomat said. “Everybody comes to the table with some specific concerns, puts it on the table and is participating in good faith.”

The way Espinosa sees it, the fact that India had to make the change was because the negotiations pushed and pushed India to do more. If talks hadn’t been pushing for more change, there wouldn’t have been the drama, she said.

Still, it’s not what Espinosa wanted.

“We would have preferred a very clear statement about a phasing out of coal and (the) elimination of fossil fuel subsidies,” Espinosa said, but she understands India’s needs.

And even the phrase “phase down” may mean more than what it seems Espinosa said: “When you say phase down you’re not saying what is the limit and therefore zero can be the limit.”

But somehow it wasn’t the most tense moment of the two-week climate negotiations for Espinosa. That came Friday, the ostensible last day.

“I was worried,” Espinosa said. “I was looking at the at the clock and I was thinking, ’OK, how can we make this still work if the text does not receive broad support?”

In the end, a day later, a hold-your-nose deal to many nations because of the coal controversy was struck.

Espinosa then asked her staff to run out and get some celebratory sushi and wine.

“We had this very short toast and they we had to leave, because the premises were going to shut down,” she laughed.