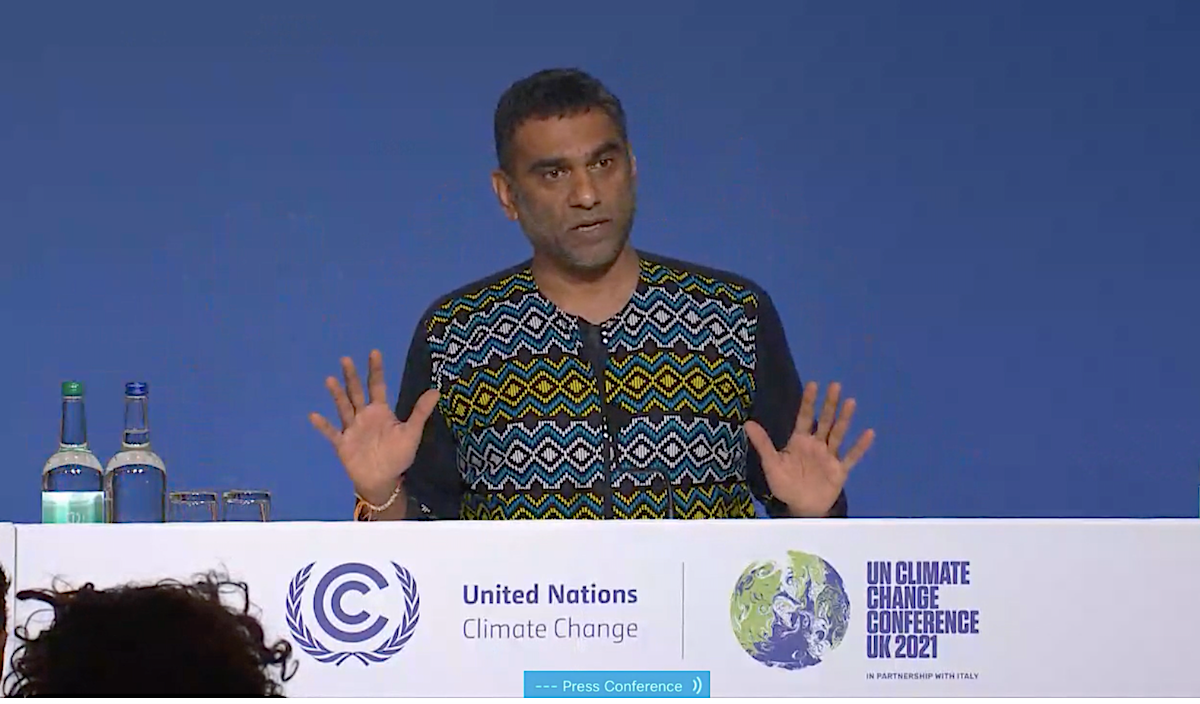 The mere mention of fossil fuel phaseouts in the UN climate summit's texts is not enough to save humanity or the planet, and the oil and gas lobby is weakening commitments in Glasgow even further, international environmental groups say.

Vigorous commitments to phase out fossil fuels and end subsidies to the oil and gas sector need to occur during the final hours of negotiations at COP26 to avert climate catastrophe, Harjeet Singh of Climate Action Network (CAN) International said during a Friday morning press conference.

“We all know that fossil fuel has been the major, major cause of the problem, but this elephant has not even been in the room,” he said, adding the UN’s 2015 Paris Accord, the current global blueprint to address the climate crisis, fails to mention fossil fuel phaseouts.

Yet a mention of winding down coal in the latest draft of the negotiation text has been weakened, Singh said, undermining already insufficient commitments on fossil fuels.

“This process that we designed … to take collective action on the climate crisis, has had almost nothing to say about the predominant cause of the climate crisis — the production and combustion of fossil fuels,” Abreu said.

“It's as if we built an entire multilateral system to address a global pandemic and never let it be said that the virus causing the pandemic was COVID-19.”

Abreu noted the number of fossil fuel lobbyists at COP26 outnumbers even the largest nations’ official delegations at the summit.

“We have sadly seen the hand of fossil fuel interests interfering with that text to water it down with weasel words like ‘unabated coal’ or ‘inefficient fossil fuel’ subsidies,” she said, noting such language has been employed in negotiations before, and without concrete action or phaseouts stipulated in COP26 agreements, there will be no possibility of limiting global warming to 1.5 C to avoid calamitous climate impacts.

Mentioning fossil fuels in the UN climate summit's texts is not enough to save humanity or the planet, international environmental groups say. #COP26 #COP26xCNO

The world's five wealthiest nations — Canada, the U.S., Australia, Norway and the U.K. — are spending over $150 billion of taxpayers' money on fossil fuels, said Abreu, referring to a new report, The Fossil Fuelled 5, which outlines the widening gap between nations’ rhetoric on climate action and their plans to grow fossil fuel production.

Ottawa has committed to increasing the price of carbon but has also provided approximately $17 billion in public finance to three fossil fuel pipelines between 2018 and 2020, according to the study by produced by the University of Sussex in co-operation with the Fossil Fuel Non-Proliferation Treaty Initiative.

Tzeporah Berman, the treaty’s chair and international program director for Stand.earth, noted Canada touts itself as a global climate leader, but its emissions have continued to rise since signing the Paris Agreement.

“The Canadian government subsidizes the sector more than any other G20 nation,” Berman said, adding the report illustrates why Ottawa is blocking any binding agreements for a wind-down of fossil fuel production at the UN summit.

“It’s not too late to turn things around,” she said, urging Steven Guilbeault, Canada’s environment minister, to return home and put a meaningful cap on emissions from the oil and gas industry.

“Canada can then rejoin the international negotiating table with a real intention to be part of the solution, rather than accelerating the climate emergency,” she said.

The climate activists in Glasgow called on global leaders to wind down fuels by five per cent annually as recommended by the UN's Environmental Program report, rather than expanding production to levels double of those needed to meet thresholds set in the Paris Agreement.

Eriel Deranger, executive director of Indigenous Climate Action, noted that along with keeping oil in the ground, Indigenous and human rights needed to be explicitly outlined in any final agreements at COP26.

In particular, carbon trading and offsets tied to nature-based solutions pose the risk of neocolonial land grabs, pushing Indigenous people and communities out of their territories as states and corporations monetize the environment, she said.

“We are talking about mechanisms that commodify our lands and territories and the sacred places that are deeply intertwined with our identities and who we are," she said, noting many of the world’s Indigenous people still do not have sovereignty over their territories.

"We must not just ask for the end of fossil fuels, we must work towards decolonizing our systems to ensure that all voices are adequately represented and our rights are protected.”

Human rights activist Kumi Naidoo lambasted global leaders' willingness to “play political poker with the future of the planet” and ongoing subsidies, and criticized their continued deference to the fossil fuel industry.

“We need to understand that one more cent in any new fossil fuel project is the investment in our children’s and their children’s destruction,” said Naidoo.

The planet, in some form or another, will ultimately survive the looming climate catastrophe — it’s humanity that risks going extinct, he said.

“We cannot change the science," Naidoo said. “All that is within our capability is to change political will.”

Naidoo had a message for those worldwide and at the summit struggling to spur real change to mitigate the climate crisis who might be demoralized by the potentially “wishy-washy” outcomes at COP26.

“Do not give up hope,” Naidoo said.

Inaction at the summit should spur civil society and the Global South to double down, he added.

“The message we must take from this COP is that this is a moment of intensification of resistance to the fossil fuel industry. This is a licence to us.”

The "Elephant in the room"

The "Elephant in the room" may be larger than just that from fossil fuels, gut all sources of energy used by us humans. We use all sorts of energy sources to power our expansion of production of foods, temperature control , transportation and things.
Our biosphere was evidently developed over eons of time with just the ambient energy radiated by the sun. That radiation turned out to be more than the Biosphere needed to function well, and large amounts were put away out of harms way. Our species has found a way to put that stagnate energy, plus more back into the Biosphere. Makes the mix too rich and the Biosphere engine of life is faltering, judging by all the symptoms agitating us Sapiens. Let smart brains examine this thesis and speak out. Time is running out for there to be future generations of our species.