Chefs and grocers adapt in B.C.’s ‘year of emergencies’ 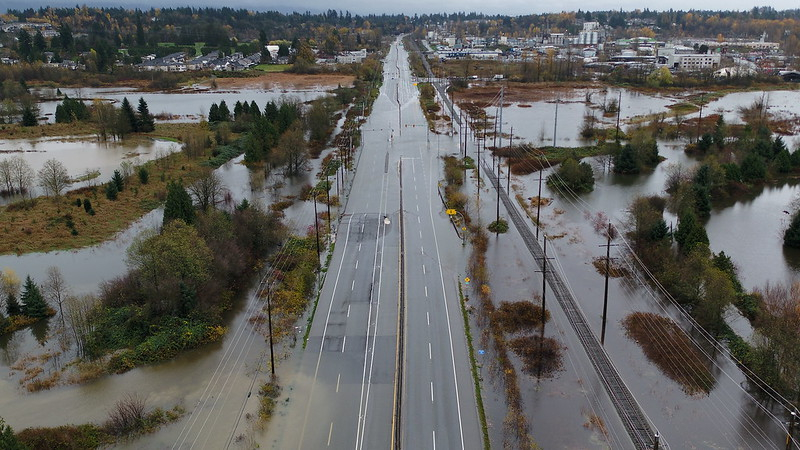 About 78 per cent of food in B.C. passes through Metro Vancouver. With floods and mudslides currently cutting the region off from the rest of B.C., some stores have struggled to keep shelves stocked. Photo by B.C. Ministry of Transportation/Flickr
Previous story
Next story

When Ari Derfel heard the news earlier this week that landslides and floods had cut Vancouver off from the rest of B.C., the general manager of the Kootenay Co-op in Nelson did a quick mental scan of the grocery store's inventory.

"Common wisdom usually says a grocery store or town has three to five days' worth of food if they're cut off, and it's been an interesting experience to test that theory: It looks like we actually have more," he said. "It turns out we have pretty awesome resiliency."

Six days after an unprecedented storm destroyed highways and left much of the Fraser Valley — B.C.'s breadbasket — underwater, the store is only running low on some fruits and vegetables that aren't grown locally. But they still have eggs, chicken, butter, meat, bread, and pasta, which means there is little chance the 10,570-person city will be going hungry in the coming days.

Not every store has been so lucky. Recent days have seen viral photos emerging on social media of barren shelves in grocery stores like Save-on-Foods, Safeway, and Walmart from Prince Rupert to 100-Mile House as consumers rush to buy necessities and suppliers struggle to reroute shipments of food. Speaking at a Wednesday media event, Premier John Horgan implored residents to avoid panic-buying as grocers and the province scrambled to restore disrupted supply chains.

"Please do not hoard items. What you need, your neighbours need as well," he said.

A study commissioned last year by Metro Vancouver found that about 78 per cent of B.C.'s food typically transits through the region on its way to smaller communities across the province. With broken bridges and muddy piles of rocks and trees blocking all major highways out of the city, many stores have been unable to resupply for days as they find alternative supply routes through Alberta or the U.S.

In Prince Rupert, shelves at the two main grocery stores were bare Thursday when sushi chef Dai Fukasaku went to grab a can of heavy cream. It was a drastic change from the scene a few days earlier when he roamed aisles packed with produce and dairy during his weekly grocery run to restock his restaurant.

While he said the stores have already started resupplying their shelves via other distribution hubs, the experience encouraged him to craft next week's menu almost entirely with local foods like carrots, beets, and seafood. He has "no idea" yet what those dishes will be, but is eager to spend the weekend crafting them for his dockside restaurant.

"I want to challenge myself with veggies from local farmers [because] local food security is one of the things I'm working with."

Others in the region will likely be facing similar culinary challenges, hinted Kitwanga farmer Jacob Beaton. Located between Terrace and Smithers in a remote area roughly 1,400 kilometres north of Vancouver, his farm has been flooded with local residents looking to bolster their food supplies.

"It's been pretty nice this time around," said Kootenay Co-op general manager Ari Derfel. "We've been living in a year of emergencies and this time — seeing people just come in and get what they need and not freaking out — it's been kinda calming."

Over the last week, he has given away roughly 1,000 pounds of potatoes, carrots, cabbage and some greens. Seed potatoes for next year and enough food to feed his family through the winter is all that's left in his cold storage. Yet instead of concerning him, the demand on his reserves reaffirmed his belief more must be done to bolster regional food security.

Derfel, the Kootenay Co-op manager, echoed Beaton's concerns. While his store and others across the province have been able to find alternate routes for their supplies, climate change means that catastrophic weather events — or pandemics — are nearly inevitable in years to come. Communities, grocers, and food producers must start preparing for these disruptions, he said.

"We can more easily now see where exactly the vulnerabilities are," he explained. "I think that's where we're going to put a lot of energy and resources [alongside] folks already working on that."

For instance, the region currently lacks a local distribution system, with most stores bringing their stock in from urban centres like Calgary or Vancouver.

Still, these changes won't happen overnight. In the meantime, he's glad shoppers in his small mountain community have refrained from emptying produce shelves and milk-filled fridges during a trying time.

"It's been pretty nice this time around," he said. "We've been living in a year of emergencies and this time — seeing people just come in and get what they need and not freaking out — it's been kinda calming."

"they still have eggs,

"they still have eggs, chicken, butter, meat, bread, and pasta, which means there is little chance the 10,570-person city will be going hungry in the coming days. "

And here's the rub: that eggs, chicken, butter, meat, bread and pasta came largely from the same industries and industrial practices that are a big part of the problem in the first place.

And there's absolutely nothing in there for vegetarians with allergies (which can be life-threatening or crippling) ... let alone those with celiac ...

There's no room for complacency around the system's "resiliency," because the food consumption patterns that cause and exacerbate climate change are all that's left for the time being.