As some evacuees return home, B.C. braces for storm 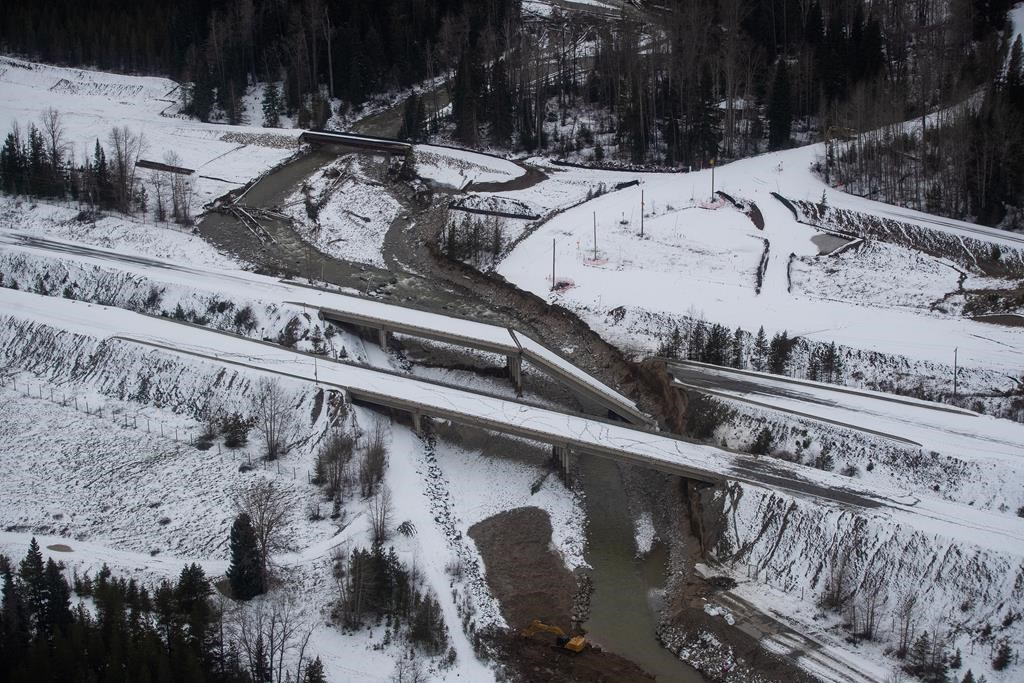 A collapsed section of a bridge sits in the water after severe flooding and landslides on the Coquihalla Highway south of Merritt, BC, as seen in an aerial view from a Canadian Forces reconnaissance flight on Nov. 22, 2021. Photo by The Canadian Press
Previous story

As some evacuees from devastating flooding in British Columbia were allowed to return home Tuesday, the mayor of Abbotsford said preparations were progressing for another storm that's expected later this week.

Henry Braun said Tuesday the city has finished inspecting its dike system and found less than one per cent needed repair after last week's heavy rainfall. About 80 per cent of the repairs were complete, he added.

"We expect another five feet (1.5 metres) of height to be added to the dike prior to the weather event anticipated for Thursday," Braun told a news conference.

"I am hopeful that this will put us in the best position to manage the rain that will come."

Braun said the Barrowtown water pump station is also being fortified through sandbagging and additional pumping with help from the Canadian Armed Forces. After the last storm, he said damage could have been worse if the key pump station had failed.

He also encouraged local residents to prepare an emergency kit in advance of the coming storm.

A week after Merritt was forced to evacuate when a river flooded into the city of about 7,000, Mayor Linda Brown announced the first phase of a three-step plan allowing people to return home.

About 1,500 residents were allowed to return Tuesday, with certain properties remaining on evacuation alert and under a boil-water advisory.

"What you are coming home to is a city that's changed," said Brown in a post on the city's website.

Returning residents were asked to help limit pressure on key pieces of municipal infrastructure including the sewage system.

"You will be asked to use as little water as possible to preserve supplies for the fire department, and you will not have an operational hospital," said Brown.

The evacuation was ordered Nov. 15 as the Coldwater River burst its banks and overwhelmed the city's wastewater treatment plant.

Environment Canada posted special weather statements early Tuesday for much of B.C.'s inner south coast, including the flood-damaged Fraser Valley. The statement warned a new storm is expected to hit the region Wednesday night, dropping 40 to 80 millimetres of rain, before easing Friday.

"This storm will be shorter-lived and less intense than the event over Nov. 13-15. However, it will still bring moderate to heavy rain and strong winds."

A second so-called atmospheric river is also forecast to drench the south coast Saturday, the weather office said, with total accumulations from both storms likely to exceed 100 millimetres.

Canadian Pacific Railway Ltd. said it planned to reopen its line between Kamloops and Vancouver on Tuesday, but CP's CEO cautioned the next 10 days will be critical as the company moves toward returning to full service. CP said it would work closely with customers and terminals to clear backlogs and get freight moving efficiently again.

Supply chain troubles, including a precautionary closure of the Trans Mountain pipeline, have led to some shortages. The B.C. government said Monday that gas rationing would be in effect across the Lower Mainland, Sunshine Coast and parts of southern Vancouver Island and the Gulf Islands.

Parkland Corp. processes the crude oil supplied by the Trans Mountain pipeline and said it would pause its refinery operations in Burnaby while the pipeline is offline. The refinery, which is a key source of gasoline for the Vancouver area, will be maintained in ready-mode so it can resume processing quickly once sufficient crude oil feedstocks become available, Parkland said in a statement.

Public Safety Minister Mike Farnworth said more than 6,500 people have been registered as evacuees and those whose homes were flooded are eligible for a $2,000 grant through the Canadian Red Cross and the province.

Existing emergency assistance funding is also available for students at the Nicola Valley Institute of Technology and the University of the Fraser Valley, he said, adding it's not a loan that has to be paid back.

Farnworth said B.C. residents should pay close attention to the weather forecast as more storms are expected after last week's atmospheric river dumped an unprecedented amount of rain on the southwest part of the province, triggering mudslides that cut off highways.

Transportation Minister Rob Fleming said record amounts of gas have been barged in from the United States as engineers and geotechnical experts assess damage to major roadways, including five sites on the Coquihalla Highway.

The Fraser Valley area of Sumas Prairie experienced the highest flood levels, and many of the farmers there have lost their crops, dairy and livestock.

Agriculture Minister Lana Popham flew over the area and spoke to about 30 farmers on Tuesday and said she was shocked by the devastation she saw.

“There’s a lot of pain. I’m not going to lie, there were farmers in tears," she said. "It was super hard to see people that I’ve known for a long time suffering so much."