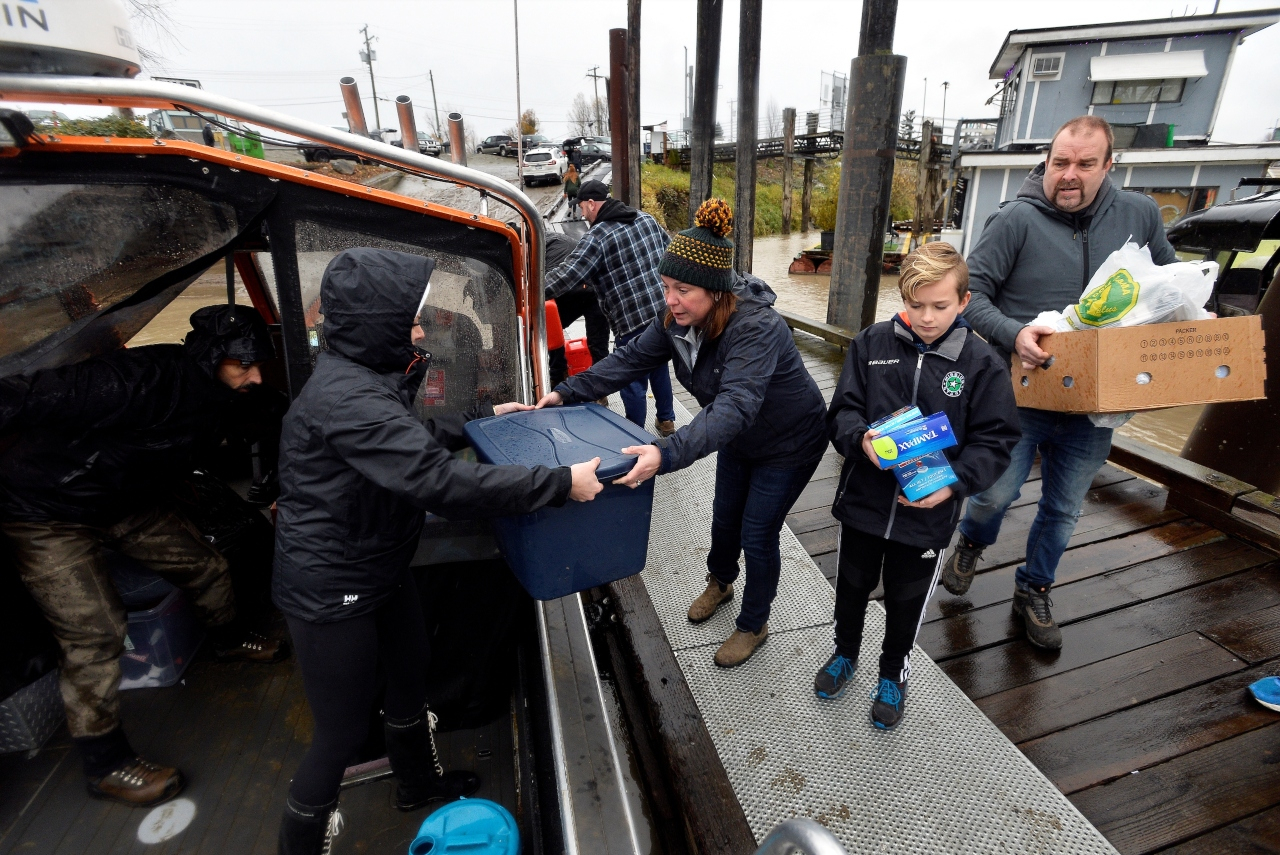 Residents of Mission, B.C., load Brandyn Desjarlais's boat on Nov. 18 with donations for the people of Chilliwack after rainstorms triggered landslides and floods. Photo from Reuters / Jennifer Gauthier
Previous story

“The crisis consists precisely in the fact that the old is dying and the new cannot be born; in this interregnum a great variety of morbid symptoms appear.” — Italian Marxist theorist Antonio Gramsci

When it comes to the climate emergency, this is the period of our awkward interregnum. Most of us now get the emergency, but at some level, we are almost all still in a state of denial, not yet ready to leap into a grand transition. Certainly, our political leaders are, for the most part, still in denial. Not about the reality of human-induced climate change, but about what confronting it actually requires. We are all making our futile little bargains with the laws of nature: please just this trip, or little more time with this vehicle; please just a few more barrels of oil; or my current favourite — please just let us have this pipeline and we’ll use the money to fund the transition.

Most of us know the battle for our lives must soon get underway in earnest, and most of our leaders — in government and industry — are now talking tough on climate. But in deeds, they aren’t there yet.

Emergencies and disasters can bring out the worst in us. But often they actually bring out our best. Both have been on display this week in my province of British Columbia. We have seen some anti-social behaviour, like hoarding. But we have also witnessed some remarkable displays of mutual aid and solidarity. For an example of the remarkable mutual aid efforts underway, see this regularly updated Google doc created by a woman named Kimberly Gillard. People have taken in strangers. Sikh gurdwaras in Surrey prepared thousands of vegetarian meals, then rented a helicopter to get that food to people stranded in Hope. 350.org has an excellent summary of what's been unfolding in B.C., along with a helpful and verified list of how people can support relief efforts here. And CanadaHelps has donation options here.

In her 2009 book, A Paradise Built in Hell: The Extraordinary Communities That Arise in Disaster, American writer Rebecca Solnit details the beautiful expressions of human caring and solidarity that have marked terrible events — the San Francisco earthquakes of 1906 and 1989, the Halifax explosion of 1917 and the hurricane that hit that city in 2003, Hurricane Katrina and the catastrophe it inflicted upon New Orleans in 2005, and many others. Our mainstream media takeaways of most of these events are of destruction and chaos. But as Solnit notes:

In the wake of an earthquake, a bombing, or a major storm, most people are altruistic, urgently engaged in caring for themselves and those around them, strangers and neighbours as well as friends and loved ones. The image of the selfish, panicky, or regressively savage human being in times of disaster has little truth to it. Decades of meticulous sociological research on behaviour in disasters, from the bombings of World War II to floods, tornadoes, earthquakes, and storms across the continent and around the world, have demonstrated this ... Horrible in itself, disaster is sometimes the door back into paradise, the paradise at least in which we are who we hope to be.

The worthiest kind of leadership — whether at a grassroots or community level or a big-P political level — seeks to animate our best selves. And in the face of crisis, such leadership does not shy away but rather invites us to embrace a sense of shared purpose as we collectively tackle the emergency.

On Wednesday, the B.C. government officially declared a provincial state of emergency. But in truth, the emergency has been making itself forcefully felt in British Columbia throughout this deeply distressing year.

In June, it was the heat dome — the most deadly weather event in Canadian history. Then there were over a thousand wildfires. This past week, it was the mudslides and flooding caused by an “atmospheric river” that have drowned thousands of farm animals, forced over 17,000 people from their homes, including the entire city of Merritt, caused billions of dollars in damages, and wreaked havoc with vital infrastructure. Many of us are wrestling with growing feelings of grief and anxiety as we witness these unfolding disasters.

Across the province, many Indigenous communities are under evacuation order or alert, which led the First Nations Leadership Council to call on the province earlier in the week to declare an indefinite state of emergency in B.C. “First Nations continue to bear the brunt of climate change impacts and have been forced to flee their homes again,” the FNLC stated. “The unprecedented and continuing weather events prove that this is no longer a climate crisis; we are in an ongoing climate emergency, and lives and communities are at imminent risk.”

Opinion: "Momentum is building. We are making progress. We just live in the ambiguous time of not knowing if progress will come fast and soon enough," writes @SethDKlein for @NatObserver. #ClimateCrisis #BCStorms

With each event, the government has highlighted its “unprecedented” nature. “I think all British Columbians fully understand that now we have to better prepare for events like this,” said Premier John Horgan when declaring the state of emergency, “but we couldn’t have even imagined it six months ago.”

Except we could. Scientists, Indigenous leaders and climate activists have been warning about escalating events like this for years.

These events drive home the need to simultaneously take action on both climate mitigation (rapidly lowering greenhouse gas emissions) and adaptation (protecting people and communities from climate impacts). Much of the harm and damage could have been prevented if governments acted on their own reports urging how to “future-proof” our infrastructure and communities. Last June, the heat dome event killed nearly 600 British Columbians, mostly isolated lower-income seniors. If their homes had already been unplugged from gas and converted to electric heat pump systems (which also cool in the summer) as we urgently need to do to lower GHG emissions from our buildings, very likely, every one of those people would still be with us. Turns out some of the best things we can do for climate mitigation can also be lifesavers when it comes to adaptation.

But the most important thing we can do — provincially and federally — is press for genuine climate emergency plans. The federal government doesn’t have one. Nor does B.C. (as I’ve explained here). And shamefully, just as the province was wrestling with this week’s flood emergency, the government wasted valuable resources flying RCMP officers to Wet'suwet'en territory to confront and arrest Gidimt’en land defenders seeking to expel Coastal GasLink from their lands. In contrast, over 300 organizations in B.C. have now signed an open letter calling on the Horgan government to implement 10 urgent actions to confront the climate emergency.

As distressing and disruptive as this period may be, make no mistake — the terrain is shifting. The global consensus on the need for climate action is strengthening. Opinion polls make clear that the public, in the main, understands the crisis. Media reporting of the emergency is improving — by and large, news coverage during COP26 was considerably better than we’ve seen before (Canada’s National Observer’s team in Glasgow did terrific work, but they weren’t alone); now we just need to make such coverage the norm. Our leaders now talk about the emergency in suitable terms.

Momentum is building. We are making progress. We just live in the ambiguous time of not knowing if progress will come fast and soon enough.

So keep pushing on.

The quote that begins this

The quote that begins this article is even more meaningful and devastating if one imagines a pregnant mother UNABLE to deliver her baby...!!

The narrative in the media

The narrative in the media and political discourse must change from "climate change" to "decarbonization", which simplifies the message about what must be done. As an example from the tobacco industry experience, decades of "lung cancer is spreading" message proved to be lame, and positive action only came about after governments and media adopted a more actionable "cigarette smoking is injurious to health" message, specifically targeting the tobacco industry.

Even after all the recent extreme climate events in BC, we are yet to hear any mention of "fossil fuels" or "carbon emissions" in mainstream media coverage of these events. One would think the landmark Canadian Supreme Court comments ("climate change is real. It is caused by greenhouse gas emissions resulting from human activities…") would embolden our media and politicians into publicly blaming fossil fuels for the extreme climate. Clearly, that is not the case. The common person stays as confused as ever about the root cause of climate change.