Vancouver Island braces for another surge of storms 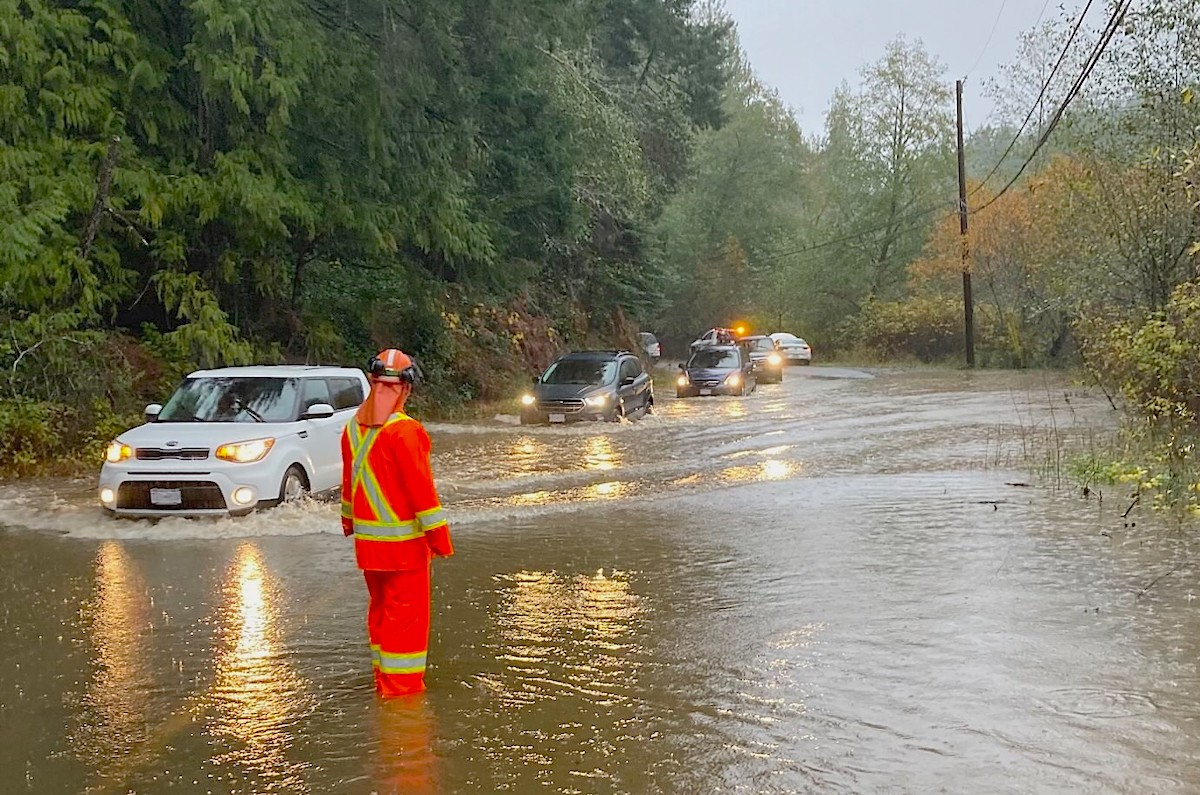 Highway 14 on southern Vancouver Island was badly flooded during B.C.'s last storm and authorities are warning coastal communities to prepare for a new wave of heavy rain and wind. Photo courtesy B.C. Ministry of Transportation
Previous story
Next story

As a trio of new storms approaches, BC Hydro is warning Vancouver Island residents to prepare for outages and avoid river systems with hydroelectric facilities because water is being released from dams to make room for the heavy rainfall.

The storms — not predicted to be as severe as those that caused devastating flooding, landslides, and serious damage to communities and roadways in southern B.C. last week — are expected to bring heavy rain, winds, and flood risk across coastal B.C.

In preparation for three forecasted atmospheric rivers — long, narrow columns of water vapour that can create extreme rainfall and flooding — BC Hydro increased water volume along the Campbell River downstream of its three dams starting Tuesday night. There are now 128 cubic metres per second (m3/s) moving out of the John Hart facility, said BC Hydro spokesperson Stephen Watson in a statement.

Water volumes in the Elk Falls Canyon immediately below the dam were increased to 25 times above normal flows to 100 m3/s, Watson said.

In response to the three forecasted atmospheric rivers that may hit the coast starting tomorrow afternoon to Tuesday, tonight we will release 100 m3/s down Elk Falls Canyon. 25x normal flow and similar to early Nov.
⚠️Pls stay away from the #CampbellRiver to Dec 3. #BCStorm pic.twitter.com/cUt13CHHrQ

The first storm is expected to last into Thursday, followed by another Saturday and possibly a third on Tuesday, Watson said.

People should also stay away from the Puntledge River until Dec. 6 because triple the volume of water is being released from the Comox Dam, he said.

The provincial River Forecast Centre also issued a high streamflow advisory for Vancouver Island and the central and north coast of B.C., predicting up to 200 millimetres of rain on west Vancouver Island and exposed coastal sections of the mainland in the first storm alone.

The weather poses risks due to the cumulative impact of successive storms and the fact snowmelt is expected, the centre said, adding people should stay away from fast-flowing rivers and unstable riverbanks.

Environment Canada also issued wind warnings for Vancouver Island and the central and northern coasts Wednesday, predicting strong southeasterly winds of 70 km/h gusting to up to 90 km/h before easing Thursday morning, and gusts of up to 110 km/h on exposed coastal sections.

As a trio of new storms approaches, BC Hydro is warning Vancouver Island residents to prepare for outages and avoid river systems with hydroelectric facilities because water is being released from dams to make room for the heavy rainfall. #BCstorm

In response to forecasted three atmospheric river #BCStorms, tonight we will more than triple the water release from our Comox Dam down the Puntledge River.
⚠️Please stay away from the dangerous flows thru Dec 6. Flows similar to previous spill releases in Oct/Nov. #ComoxValley pic.twitter.com/vnIyv3RMvk

The current flow release rates on the Campbell and Puntledge rivers aren’t unusual during the rainy season and flood risk management operations, said BC Hydro in an email.

The Campbell River flow is now at 224 m3/s and will hopefully remain at this level until the weather systems pass, Watson said.

When flow rates surpass 250 m3/s, fish habitat along the river is negatively impacted, while rates of 500 m3/s paired with high ocean tides can flood homes and commercial areas along the river, said BC Hydro.

As far as the Puntledge River is concerned, flow rates during weather events can go up to 300 m3/s without issue, and BC Hydro drops flow rates during high tides to reduce the amount of water flowing into the estuary and the risk of isolated flooding.

“The ocean high tide cycle this weekend is in the lower-middle range, which is helpful, with really high tides set for Dec. 5 to 10,” Watson said, adding if the weather and conditions change, BC Hydro will issue another update.

While preparing for the next round of weather, BC Hydro is still working to deal with the extraordinary damages caused by the last rainstorm in B.C., said president and CEO Chris O’Riley in a statement.

There were record inflows into some water reservoirs and 258,000 people saw power outages, O’Riley said, adding BC Hydro is still assessing the damages, which are expected to be in the millions.

Power has been restored to all customers in the province except those living in areas still under evacuation orders and the utility is working with authorities to confirm when power can be restored safely.

BC Hydro is also working to replace infrastructure — like transmission sites, power lines and wires — in many areas of the province, such as the Highway 8 corridor near Merritt where crews need to replace 87 power poles and 14 transformers.

B.C. has declared a state of emergency and imposed travel restrictions after the floods and fatal mudslides that inundated communities such as Abbotsford’s Sumas Prairie, Merritt, and Princeton.

Canada's critical infrastructure must be strengthened