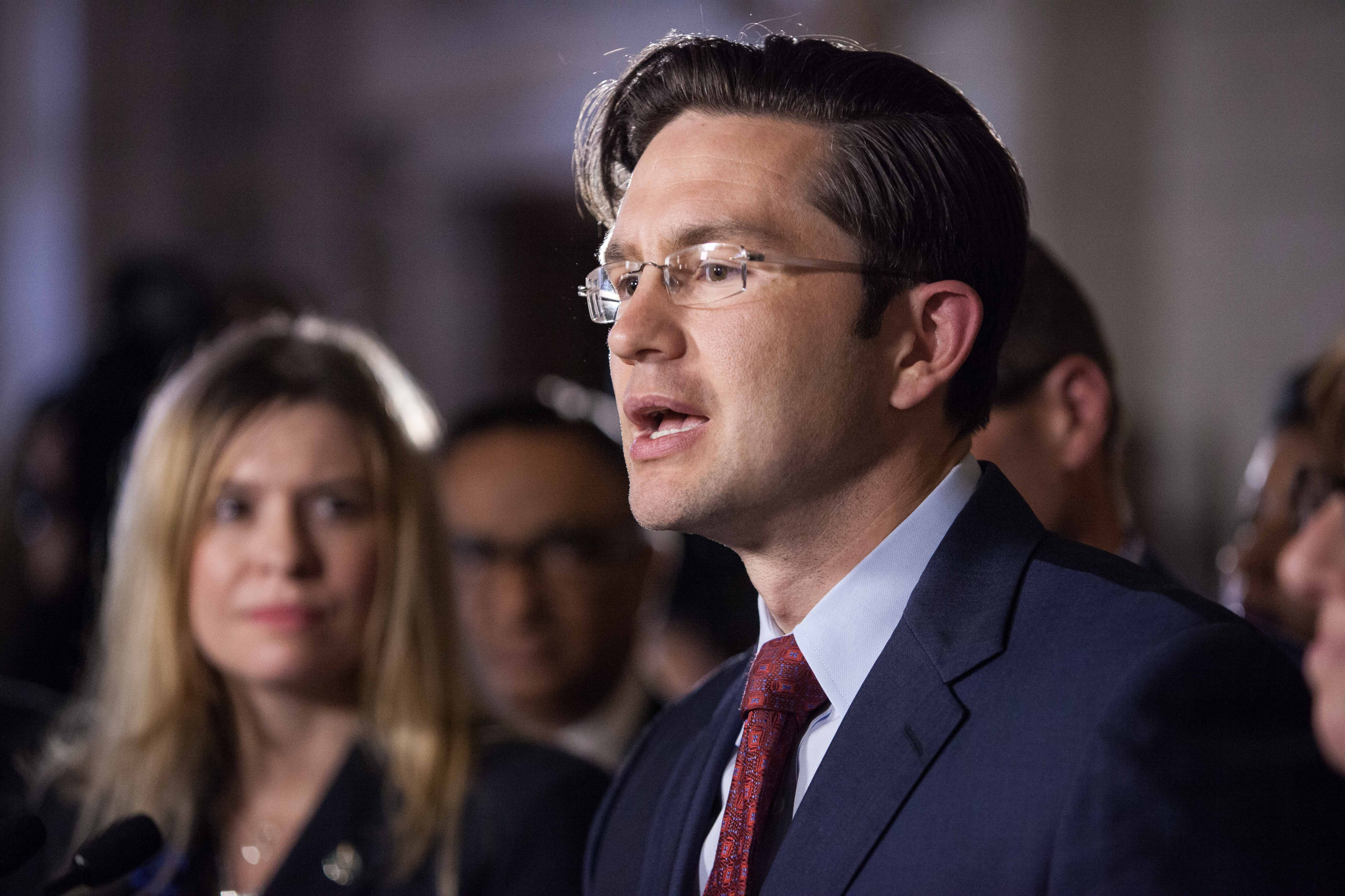 It wasn’t that long ago that the Conservative Party of Canada prided itself on being literate on the important economic and financial issues of the day. But if the party’s ever-deepening obsession with inflation (and insistence on pinning it to the prime minister) is any indication, those days are over.

Instead, they seem content to trade in the sort of threadbare fiction and populist fear-mongering that defined — and still animates — Trumpist economics.

Case in point: Their decision to appoint conspiracy theory enthusiast Pierre Poilievre as shadow minister of finance. After demoting him from the role back in the spring, leader Erin O’Toole handed him back his old job. That signalled the CPC’s intent to keep beating the same drum Poilievre played all summer long: accusing the Liberal government of creating inflation through its excessive spending. “Our goal is to push them to stop doing the things that cause inflation,” Poilievre told the National Post.

Those things, not surprisingly, are the same things Poilievre objected to back in March 2020 when the pandemic was just getting started: Spending money to support Canadian households and businesses. “You might want to address it through big, fat government programs,” he said in response to a question about his belief tax cuts were the right way to respond to COVID-19. “We’re conservatives, so we don’t believe in that.”

Never mind that prominent conservative pundits like Ken Boessenkool and John Ivison have admitted the current bout of inflation Canadians are dealing with has precisely nothing to do with the federal government’s policies, or that similar levels of inflation in countries like Germany, the United Kingdom and the United States would seem to suggest it can’t possibly be Justin Trudeau’s doing.

In Poilievre’s universe, Trudeau is Schrodinger’s prime minister: simultaneously too weak to achieve anything of substance and so powerful that he determines global markets and inflation trends.

But if Trudeau isn’t responsible for inflation, what is? In the near term, it’s being driven by COVID-19 and its impact on everything from oil and gas prices to supply chains (or, as Ivison called them, “supply kinks”). Indeed, there’s a certain irony in conservatives crying bloody murder about inflation when as much as one-third of it is due to soaring oil and natural gas prices, which disproportionately benefit their western Canadian supporters and will help turn Alberta and Saskatchewan’s finances from raging dumpster fires into mere smouldering trash cans.

In the longer term, though, the real driver of inflation is the one conservatives desperately want to avoid talking about: climate change.

Take the recent tweet from O’Toole, in which he suggested the rising cost of breakfast foods like bacon, syrup and coffee was somehow attributable to Trudeau’s policies rather than things like supply chain disruptions and extreme weather events. But as the Agri-Food Analytics Lab at Dalhousie noted in a Sept. 29 survey, “Many staples including meat, dairy, and groceries have increased in recent months due to macroeconomic shocks, caused by both unfavourable weather patterns in the Northern Hemisphere and logistical challenges due to the global pandemic.”

Syrup prices aren’t surging because of Trudeau’s nefarious policies but instead because of a mismatch between demand and supply driven by weather (and climate). As NPR noted in a piece on the global syrup shortage, “This year's short and warm spring resulted in an uncharacteristically low yield for producers.”

Opinion: In Pierre Poilievre’s universe, Trudeau is Schrodinger’s prime minister: simultaneously too weak to achieve anything of substance and so powerful that he determines global markets and inflation trends, says columnist @maxfawcett. #CDNpoli

As for coffee? That’s even harder to pin on Trudeau, given unseasonable frosts in July damaged production in many key South American growing regions.

And while the supply chain disruptions caused by COVID-19 will get better, the potential impact of climate change will only get worse. That’s the working theory laid out by Umair Haque, a British writer and the director of the London-based Havas Media Lab. “Prices are going to rise, probably exponentially, over the course of the next few decades,” he writes. “The reason for that’s simple: everything, more or less, has been artificially cheap.” That’s because costs that we’ve long externalized, from carbon emissions to plastic pollution, are now going to have to be borne by companies and consumers over the next few decades.

“Making, producing, distributing, buying, selling the basics of civilization the dirty way that we do causes climate change — and climate change is trying to teach us a lesson,” Haque writes. “Climate change is made of fire and flood and typhoon and plague. See the feedback effect? Good luck distributing that batch of steel when there’s a megaflood or megafire in the way.”

The catastrophic floods in British Columbia, and the effect they’ll have on everything from shipping to agriculture, will offer Canadians an unwelcome preview of this.

Poilievre and the Conservative Party of Canada will ignore this looming threat, just as they’ve studiously downplayed or dismissed the threat of climate change for as long as they’ve been a political party. But at some point, the reality of climate-driven inflation will become apparent to even the most stubborn observer. The only real questions are whether it will be too late to do anything about it by then, and how much it will cost the working Canadians who conservatives like Poilievre claim to be fighting for.

A secondary cause of

A secondary cause of inflation just now is oligopoly. Various companies with enough market power to agree among themselves not to compete on price, have realized they have workable excuses for jacking prices and they're going for it. Profits in the grocery sector have soared.
I can't imagine Conservatives being willing to regulate that . . . although come to think of it, I can't imagine Justin Trudeau being willing to regulate that either. His dad did, though, so there was a time when the notion was thinkable to Liberals.

The growing number of blatant

The growing number of blatant contradictions embraced by the CPC is not unrelated to the appointment of Poiliever, master of attack-dog tactics characterized by a whiny monotone and relentless repetition of "how much? How much? How much?" And one of the central contradictions is found in the apt Schrodinger reference.
But what puzzles me is why in hell the John Ivison and Ken Boesenkools of the world of which there are SO many others who seem to be basically reasonable REMAIN conservatives? At what point does a person reconsider their affiliations?! It's exactly like religion, makes zero sense.
I would say the answer to that question is the usual-- male tribalism and competitive male gamesmanship as in this is " MY team" no matter what, winning is all, the ends justify the means, so playing dirty is OK? All's fair in love and war sort of thing.
Totally wrong-headed and fundamentally stupid.

Note that the most

Note that the most definitively obvious impact of climate change in Canada today is the recent never-seen-before rain and flooding in the Fraser Valley and Interior of BC. These areas are also nearly exclusively made up of federal Conservative Party and BC Liberal (read: conservative-by-another-name) Party ridings.

Every last one of these politicos should be challenged on live TV to deny climate change while standing in flood waters wearing hip waders discussing reparations with their own constituents.

Re: "The only real questions

Re: "The only real questions are whether it will be too late to do anything about it by then, and how much it will cost the working Canadians who conservatives like Poilievre claim to be fighting for."

These questions have already been answered. Since it is even now too late to avoid dangerous climate chaos (we're in the thick of it already), it will most certainly be "too late to do anything about it" by the time hell freezes over (no, wait). And how much will it cost working Canadians? Everything. You can't get more costly than extinction.